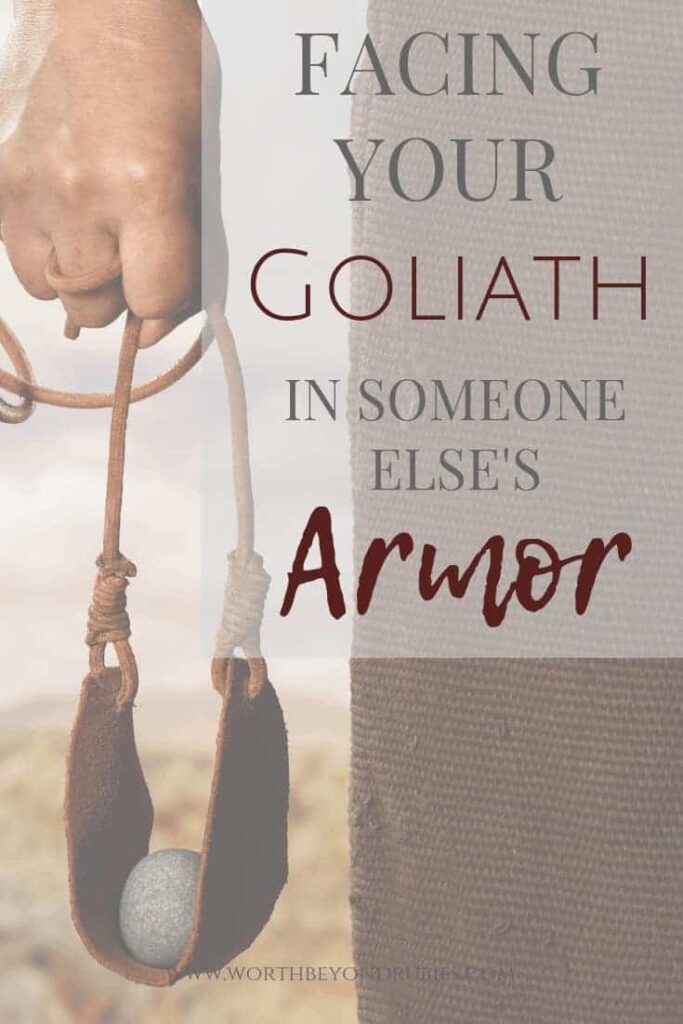 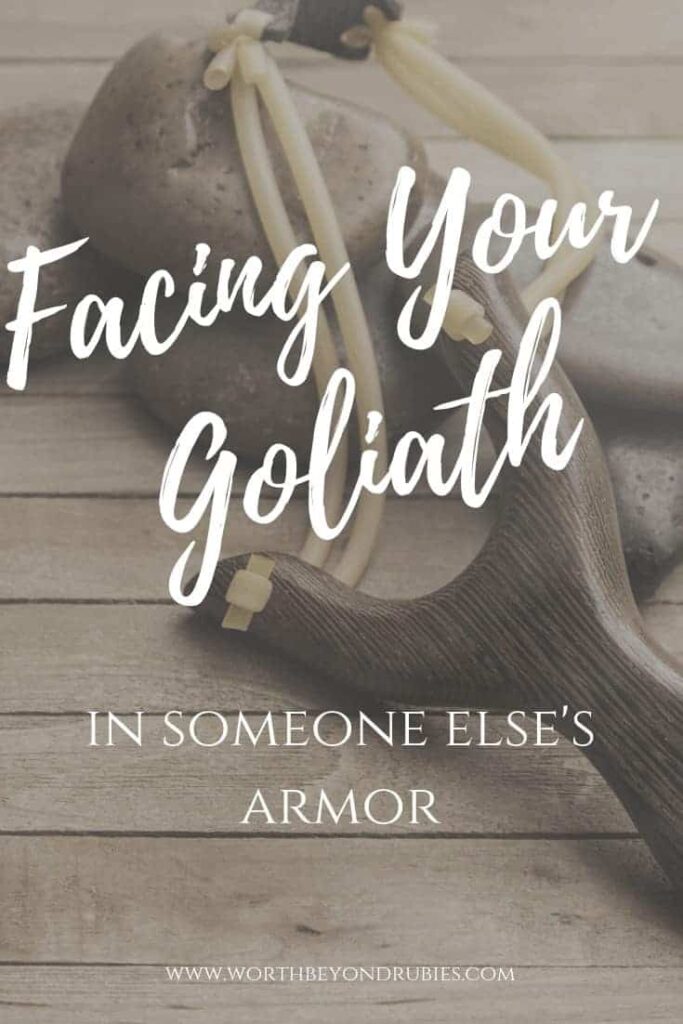 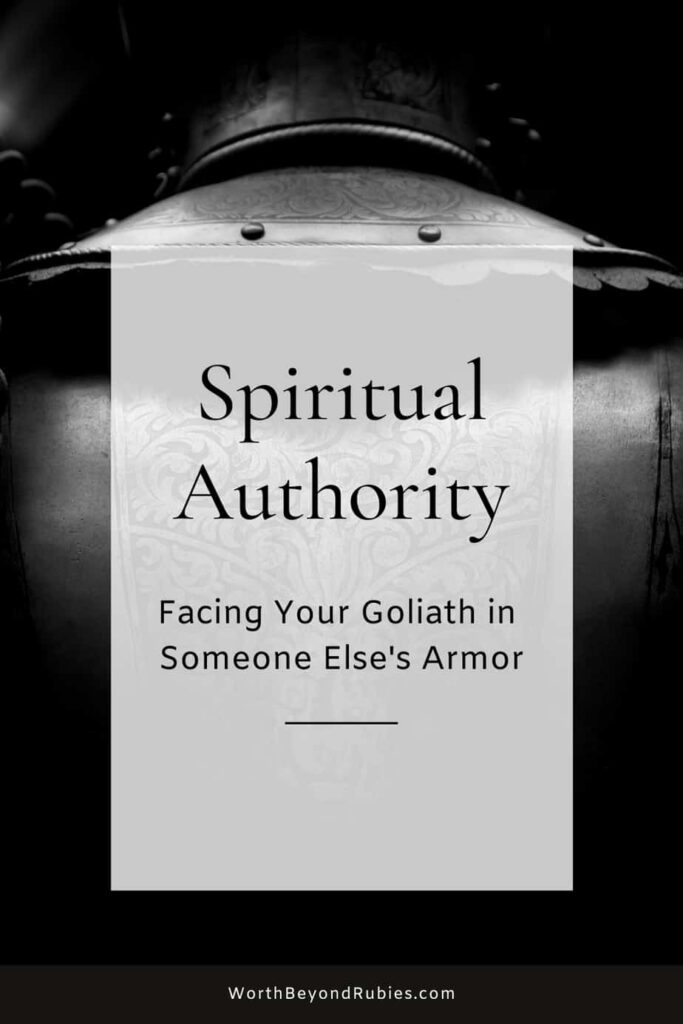 We all have our Goliaths, our own giants to face in life. We all have spiritual battles to fight with a very real enemy who wants nothing more than our utter defeat. Do you recognize the spiritual authority given to you as children of God?

The Bible tells us to put on the full armor of God but do you often find yourself facing your Goliath in someone else’s armor feeling much like David did as Saul had him wear his?

Spiritual Authority of a Shepherd Boy

David was just a young shepherd boy, the son of Jesse. He had three older brothers who had gone to war alongside King Saul against the Philistines.

When it came to the Philistines, Goliath was their champion.

He was a giant who would come out each day and taunt the Israelites, including David’s own brothers. He would challenge them to send someone to fight him. But not only would no one step up to battle this giant, but they also fled.

One day, David’s father Jesse asked his young son to bring some food to his brothers on the front lines.

David left his sheep in Bethlehem in the care of a shepherd and took off to the Valley of Elah to bring the grain and bread to his brothers.

David arrives and he hears this giant Goliath taunting the Israelites. So he asks what will be done for the man who can defeat Goliath.

He is told the King, Saul will give this man great wealth, his daughter in marriage, and his family will be tax-exempt.

David apparently thinks this is worth the battle, so he tells King Saul that he will fight this giant.

Saul essentially laughs him off because, after all, David is a mere child.

But David was not about to be laughed off. He basically reads Saul his resume and tells him of the time he killed a lion and a bear to protect the sheep.

He says this “uncircumcised Philistine” is just like a wild animal and that the same God who helped him defeat the lion and bear will allow him to defeat Goliath.

David did not put his faith in his own abilities when he told Saul about his conquests. He wasn’t bragging. He knew it was not his own authority that mattered and neither was it King Saul’s. He was informing Saul that God had been with him in the past and he knew God would be with him now.

He knew he had spiritual authority given by God which was the only power he needed, and this enemy was no match for the Lord God of Israel.

So Saul agrees and then proceeds to dress David in his own armor.

Now it’s important to note that King Saul was a VERY tall man and David was a teenage boy. So Saul’s armor was nowhere near ideal for David. Also, David was a shepherd boy, not a warrior. He was not used to this kind of equipment. These were strange things to someone like David.

Saul’s armor would not work for David because it was too big and far too bulky for a shepherd.

It was not meant for David, it was meant for Saul.

David tried to make it work because well…Saul was the king! But spiritual authority doesn’t come by forcing someone else’s armor to fit you in battle! The weapons of our warfare come from the authority of God, not man.

Saul's armor would not work for David because it was too big. It was not meant for David, it was meant for Saul. David tried to make it work because Saul was the king! But spiritual authority doesn't come by forcing someone else's… Click To Tweet

All David wanted or needed was the 5 smooth stones he picked up off the ground, his slingshot, and the blessing of the Lord.

David took out Goliath with one shot and cut off his head with his Goliath’s own sword.

David didn’t need Saul’s armor. He only needed to put on the full armor of God, the Holy One of Israel.

His armor was his faith in God!

And in spiritual warfare our armor cannot come from anyone else the Lord Jesus Christ and the Kingdom of God. You cannot fight evil spirits with man’s authority. No preacher or teacher can take a position of authority over the Word of God.

To battle the power of the devil you need the Lordship of Jesus Christ, not some clunky armor built for someone else.

What does this mean? Well, let me explain.

What happens in the lives of believers and how God works through their battles doesn’t mean that is what He would have YOU do.

Their lesson in their trial is for them. God may be trying to teach them a lesson for a reason and a season and while they may share some important truths with you, those truths might have been for THEIR situation and God may have a different road He wants you on.

While the full armor of God may be the same for believers, each piece might look a little different for each of us depending on our battles.

My sword of the Spirit might look different than yours. God may have different scriptures for me and the ones He gave you may not be the ones He wants me to find for my trial.

And my armor might even look a little different for various trials in each area of life.

The Full Armor of God

David tried on the armor Saul gave him and found it didn’t fit. He knew he could not battle his enemy in armor not meant for him.

God doesn’t want us doing things the way other people have. Sure, we should seek godly counsel but at the end of the day, we have to be sure it is what God wants for us.

We need to seek Him in His Word and in prayer.

Everything must be measured up against the Word of God.

Facing your Goliaths means that, like David, you have to give the battle to the Lord. Let the Lord go before you into battle!

This is not a physical battle but a spiritual one, and your spiritual authority doesn’t lie in your own power or someone else’s solutions. It is found in God alone!

David did not want to wear Saul’s armor, not only because it was too large but because it was untested in the battle for him. Put on the full armor of God, not the armor of man! Trust the Son of God to go into that battle with you.

Test everything! Don’t assume because something works for someone else that it will work for you! God’s authority is all you need to see you through your spiritual battles.

Don’t try facing your Goliath in someone else’s armor! Let the Lord lead you!

Be sure to get your FREE Prayers and Scriptures for Effective Spiritual Warfare below!