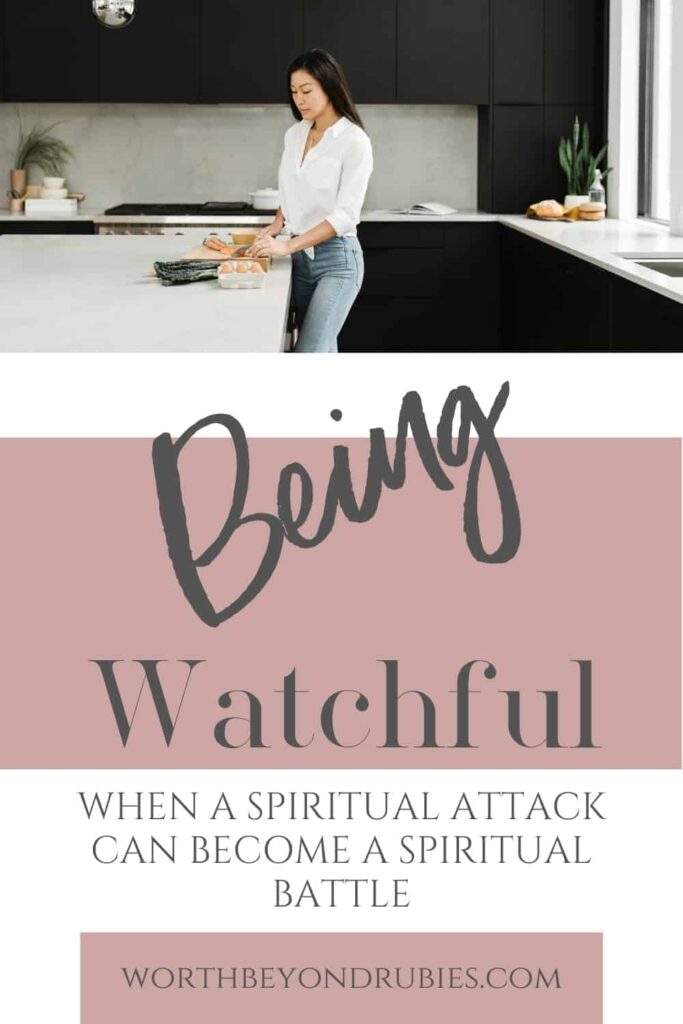 When we talk about spiritual battle and spiritual attack, we many times think of things like someone being “demon possessed” or oppressed by things like addiction, anger, and yes, even a worldwide pandemic.

But is that always the way a spiritual attack happens? This grand battle for your mind?

No, not always. Sometimes the spiritual attack could be as quiet as a mouse. Learn how to see those attacks can be just as dangerous as the larger battles.

Spiritual Attack as Quiet as a Mouse

I don’t know who ever came up with the term “quiet as a mouse”…or I should say WHY they came up with it. But it doesn’t matter.

Mice and I are not friends. Oh, I am fine with them outside. I don’t get frightened by animals in their own habitat. If I am outside and come across a garter snake or a rat snake, I will happily go over and say hello! But stay out of my house!

For some reason, when these tiny creatures like mice are inside, it becomes a totally different picture.

They are dirty. They can carry disease. And they leave “evidence” of their presence all over the place.

So why am I telling you this?

Well, the other day I went into the cabinet under my kitchen sink to get my cleaning spray. I get this spray at least a couple of times a day so I am in that cabinet quite often, especially with the current pandemic.

Well, as soon as I opened the cabinet door I saw it. We had a coffee can where we keep the grease from cooking and there on top were those tell-tale signs of a rodent! It was also on my Swiffer Duster and my floor polishing pad. Not a lot, but one is enough don’t you think?

Anyone who knows me knows…Diane does NOT do rodents and Diane does not do bugs!

I employ the services of a pest control company who comes to my house every 3 months to do a full treatment and every single time they tell me that yes, there is evidence of mice in my basement (we have an 1880’s farmhouse with a dry-laid stone foundation so there will always be mice that come in on occasion) but not a lot.

They always tell me there is very little activity, probably because of all the out-buildings we have.

And this “visit” from our little friend seemed to be an oddity judging from the amount of droppings. But we didn’t know how we got a mouse inside the house. The former homeowner told us (AFTER we bought the house) that yes, he has caught some mice in the basement here and there but in 17 years that they lived here they had never had any up in the house.

So my pest control guy put some bait traps down so that we could see where they were coming in and out of from and that was that.

So after the pest control guy had done his thing. my wonderful husband went about the work of cleaning up and disinfecting the cabinet. While he was in the area further back he found it; the entry point.

Apparently there was a hole in the bottom of the cabinet right next to the plumbing that led down to the basement and it looks as though our friends had chewed their way in.

We never saw it because it was way in the back of the cabinet and I never go back there because everything I use is in the front!

So he got some steel wool and sealed up the hole and I am happy to say we have not seen any more evidence in the house!

This spot in the cabinet wasn’t seen because I never felt the need to check. No mice in our house for 17 years (that anyone knew of) so why think to look?

I made the assumption that everything was fine while right under my nose there was an excavation project going on inches away from where I grab my cleaner or my dishwasher detergent.

This “enemy” of mine snuck in because I wasn’t looking for him. I assumed everything was going along as it should, just happily and blissfully unaware of the intrusion going on in my home.

So I first want to discuss what I mean by spiritual attacks vs spiritual battle as I will use them here.

This is by no means an “official” definition of the two and it is just how I define them based on how I have seen the enemy operate in my life and in the lives of others.

A Spiritual Battle to me is an battle for the soul of a believer. It tends to be like any war really. We have the overarching war that the enemy rages against people, nations, cities and so on.

Like with many wars, there may be battles. These are of a larger scale than an attack. These are blistering fights for your life or your soul.

Some Examples of Spiritual Battle

The list could go on but you see these are over-arching issues.

The enemy could lie to you about your worth in God’s eyes and that is an attack in the battle for your mind.

He could attack your overall health with smaller ailments and pains to keep you from moving forward with what God wants you to accomplish. That is an attack in the battle for your health.

He could whisper lies in your spouse’s ears that having that “innocent” lunch with a female co-worker is just lunch but then turns into flirting and so on,  and that is an attack in the battle for your marriage.

So that is how I am using the distinction between them. And all these spiritual battles are part of the Spiritual War that rages for our souls.

Spiritual Attacks That Can Go Neglected

When we are not watching, things can get into our lives and our homes undetected and neglected.

I was not looking for an invader in my home simply because I hadn’t had one yet. So rather than checking and making sure all is ok, especially in an 1880’s farmhouse, I made an assumption it would be and right under my nose, it was creating an entry point.

And Satan will do the same. Right under your nose, when you are not watching and you are neglecting to pay attention, he will come in with those attacks that can escalate into battles.

Watch out here in the Tree of Life version is probably my favorite way of putting it. But let’s look and see what some other translations say:

“Be sober-minded; be watchful. Your adversary the devil prowls around like a roaring lion, seeking someone to devour.” ESV

“Be of sober spirit, be on the alert. Your adversary, the devil, prowls around like a roaring lion, seeking someone to devour.” NASB

“Stay sober, stay alert! Your enemy, the Adversary, stalks about like a roaring lion looking for someone to devour.” CJB

The Greek for the words “be watchful”, “be on the alert”, “watch out” and “stay alert” is the word grēgoreuō  and it means, according to Strong’s:

to keep awake, that is, watch (literally or figuratively): – be vigilant, wake, (be) watch (-ful)

Those are all important words for a follower of Yeshua. Keep awake!

Isn’t that what He instructed His disciples, His talmidim?

Yes! In fact he used the exact same word grēgoreuō!

Why did Yeshua want his talmidim to stay awake and be vigilant? Let’s look at the next verse in Matthew 26:41:

So you will not be put to the test! “Stay awake” in this verse also is the word grēgoreuō!

This incident has shown me that I can easily get caught up in life and in the busyness of the day and fail to be watchful of areas he might be trying to gain access to.

So how to you ensure you are taking steps to “seal” those potential entry points?

How to Protect Yourself Against Spiritual Attack

We are at war with a very real enemy! But he lies and he only has power over us when we allow him to! God has given us armor to put on in the spiritual battle!

I love this description of our armor in the Complete Jewish Bible in Ephesians 6:10-18:

Notice the words ‘vigilantly’ and ‘persistently’ at the end of those verses! Stay vigilant and stay alert! Stop the spiritual attack before it becomes a battle!

Have you found areas of your life where the enemy was able to gain entry with a spiritual attack that you have had to seal up? Share with us in the comments if you’d like! It might help someone else who is struggling with the same area!

And be sure to grab your FREE Prayers and Scriptures for Effective Spiritual Warfare Workbook below as my gift to you!