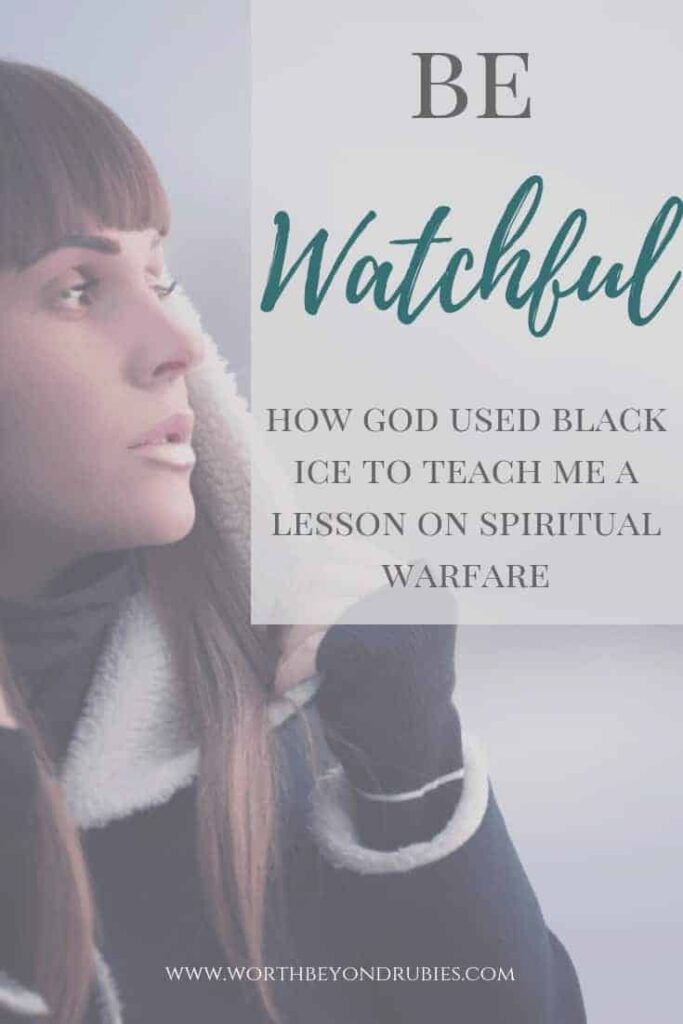 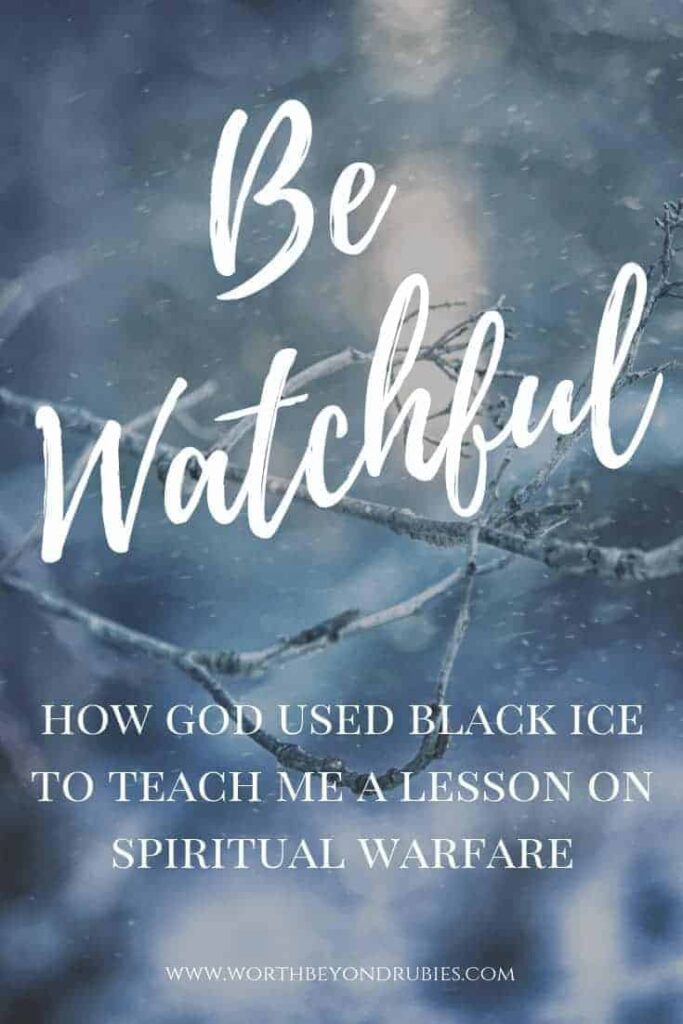 Living in New England definitely comes with some interesting challenges in the winter. One of those challenges is black ice. If you are not familiar with black ice, it is a very thin glaze of ice that forms on roads, driveways and walkways and it is so thin that you don’t even notice it is there. It can cause car accidents and quite a few slips and falls. An encounter with this barely visible danger one morning served as a clear reminder about the enemy and how spiritual attacks can often go unnoticed at first.

Read on to learn more about the importance of being ever watchful for your adversary the devil and never assuming things are as they may appear.

The Danger of Not Watching for Spiritual Attacks

I walked out of my house one morning to go get something out of my car. It was a very mild, sunny winter morning so ice was the very last thing on my mind.

I stepped out onto the driveway and, about halfway to my car, I started to slide. I couldn’t hold my footing. The driveway was coated in a sheet of black ice.

Now, if you are not from a cold climate, black ice is a very thin coating of ice that is so thin it is transparent. It is not truly black, it just appears to be because it blends with the surface it is on, usually a road or pavement. You just don’t see it but it is very dangerous. I personally know someone who had lost their life to an accident caused by black ice.

Here it was on a hilly part of the driveway so I had difficulty walking. I had come too far to turn back safely and yet still had a ways to go before I reached my car.

Pretty sure I looked quite the sight to my neighbors as I stood there, hunched over, trying not to fall.

I finally reached my car but then had to face the downward slope back to the house on this invisible sheet of ice.

I am happy to report I made it back unscathed. Embarrassed but unharmed!

I had walked outside just doing my thing without any regard for the danger that was right in front of me.

It was there, just on the surface of the pavement that I always felt comfort in stepping onto without giving it a thought. But I didn’t see it. I wasn’t being watchful. I wasn’t being sober and vigilant…I was being flighty.

I also didn’t see it because I took for granted and had an expectation that the same pavement I always walked on would be the same today as it was before.

It was a subtle danger for sure, but it was there had I taken the time to look for it.

I took for granted that everything would be the same as every other day and that no danger stood in my path. I assumed any danger would be evident. And we do that with spiritual attacks as well. We assume they will be evident.

Spiritual Attacks by Your Adversary the Devil – Be Sober and Vigilant

According to yourdictionary.com, the definition of sober-minded is someone who is serious and sensible. The original Greek means essentially the same.

It says stay alert, be watchful depending on the translation! The original Greek word here is grēgoreō and it means to “watch, give strict attention to, be cautious”.

I was not being sensible or being cautious as I stepped into my familiar territory.

How often do we do that in our walk with God? How often do we step into familiarity without being sober and vigilant. Then, like a lion, he pounces. We waits for us to let our guard down!

“Your enemy, the Adversary, stalks about like a roaring lion…”

The Greek word for “stalks” here is peripateō and it means “to walk at large, to tread”. Strongs Concordance says “walk at large (especially as proof of ability),go, be occupied with, walk” (Strongs)

In our lives, how often do we step into familiarity without caution and without vigilance? "Your enemy prowls around like a roaring lion" #spiritualwarfare Click To Tweet

Be Watchful of All Your Surroundings

I used to own a martial arts school and I taught women’s self defense as one of my classes. One of the things I always made sure I stressed during each and every class was BE AWARE OF YOUR SURROUNDINGS AT ALL TIMES!

Predators will sit and watch. The are opportunists. They, like a lion, will look for the easiest target. They won’t pick on the person who is looking all around them, who is parked by a light with a camera mounted on it, who has keys in hand and looks like she would put up a fight.

No, they look for the person who is distracted. They look for someone parked in a dark location, who is digging into their purse looking for their keys, unaware of the danger nearby.

It is the same with spiritual attacks. The enemy of your soul uses similar tactics as the enemy of your physical body! He looks for the distracted and a lack of vigilance!

He essentially watches…watching and waiting to pounce on any moment of weakness or lack of sober-mindedness.

He is subtle, he is sly, and he feeds on attacking us in areas we have essentially taken for granted!

The enemy looks for those parts of our lives we are NOT being watchful over and he slips in and tries to trip us up.

Had I stopped and looked carefully at the pavement before stepping onto it, I would have seen the danger. I should have suspected it. In New England, black ice is a way of life and is extremely dangerous. When temperatures seem milder you don’t think much of it, but that tends to be when you run into it.

And we should expect spiritual attacks too! The Bible warns us that he WILL attack! It is inevitable!

Spiritual Attacks Are Part of a Larger War

The devil hits us in much the same way. Things might be going along great and we let our guard down. He sees an opening, a place in our lives we left unguarded, and in he slips.

He is SEEKING whom he can devour! The devil prowls about and watches for an opportunity to make us fall.

So be watchful! Be vigilant! Set a watchman and stand guard over your life, your marriage, your heart and your mind.

Always be studying the Word and staying in prayer and keep that as a guard over your life!

Put on the Full Armor of God

How to we defend against those spiritual attacks?

So be watchful! Be vigilant! Set a watchman and stand guard over your life, your marriage, your heart and your mind. #warfare #spiritualwarfare Click To Tweet