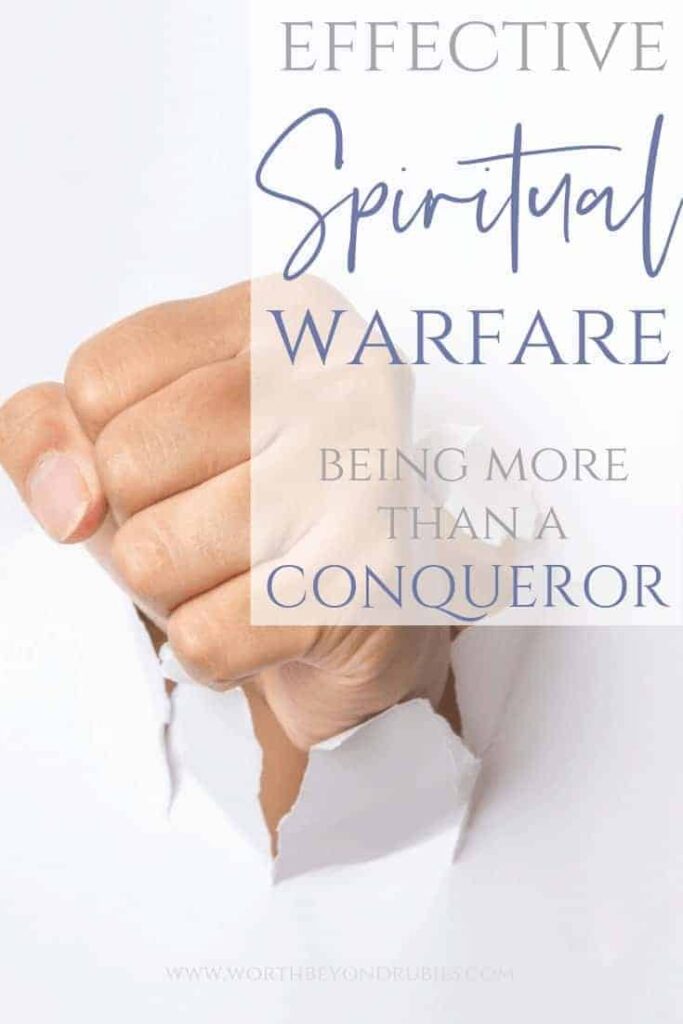 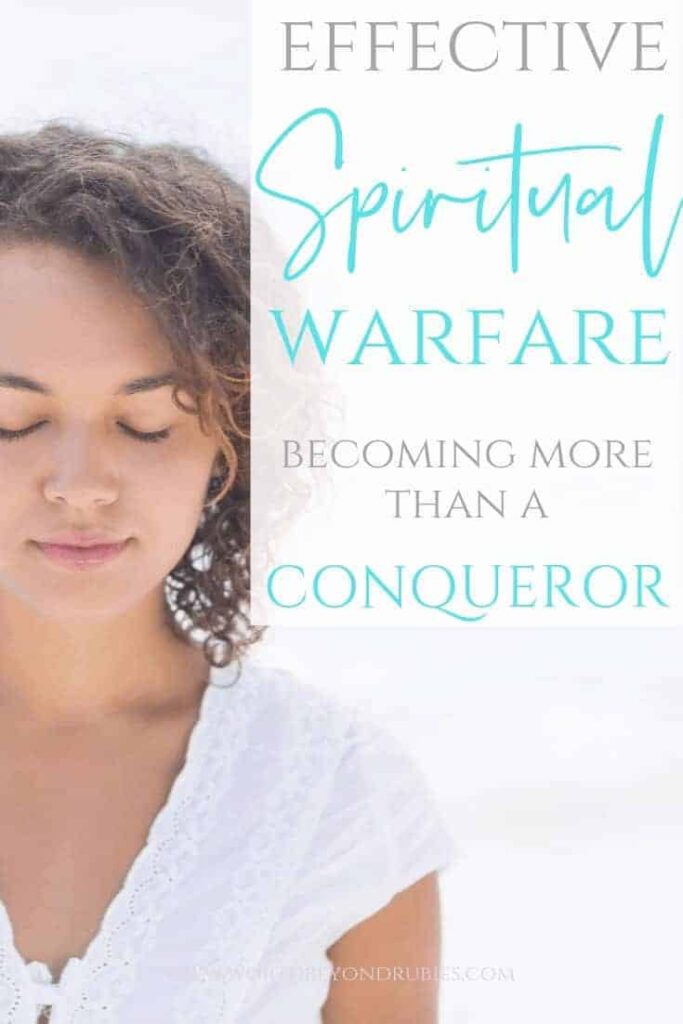 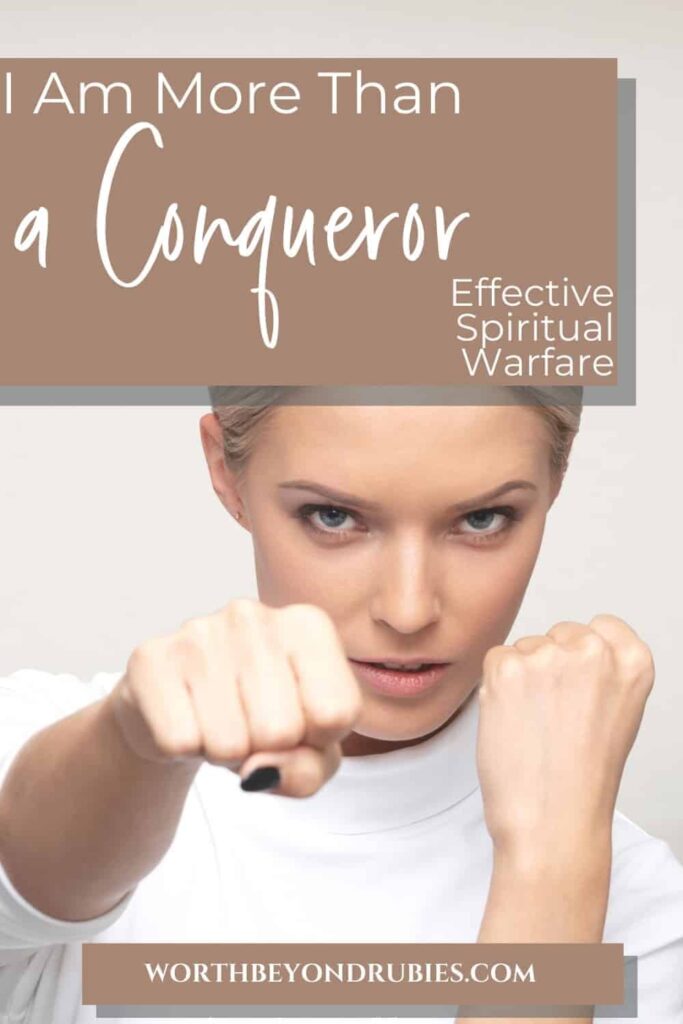 Most of us who are believers know at least a little about spiritual warfare and we have all experienced it for sure. But for those who don’t yet know the Lord, there may not be a full understanding of what spiritual warfare really is. They may hear us say “I am more than a conqueror…” but to them we are not conquerors. To them we are weak, or we use faith as a crutch.

However, being a conqueror, fighting an effective spiritual war requires a battle, not a crutch. So let’s look at what this battle entails and how to truly be more than a conqueror in Yeshua!

As I said, some people view faith as a crutch; they think that it is escapism. They believe we expect a nice trouble-free life, floating on clouds all day with the Hallelujah chorus playing in the background.

They think we are weak so we choose faith so that we have an excuse. However, the reality is quite different.

The moment you become a believer, it is like enlisting in an army; God’s army! In fact, the Lord is known by the name Adonai Tzevaot, which means Lord of Armies or Lord of Heaven’s Armies.

In joining the army of God you immediately enter the heat of battle. It is an age-old battle in a war that has been waging on for several millennia. The battle between good and evil, between right and wrong.

You see, before I was a believer, I made plenty of mistakes. I had to suffer the consequences of those mistakes, as we all must in life.

But that was it. I only had to deal with ME and the dumb mistakes I made. I posed no threat to this enemy who, at the time, I wasn’t even aware of.

Once I became a follower of God it all changed. I now had a very real enemy. I had an enemy who wanted me to run back headlong into the life I knew before because it was easier.

I had an enemy who wanted me to flee and run at the first sign of trouble.

I had an enemy who thought, if he just turned the heat up high enough, I would hightail it. I would run as fast as I could back to my old life. An enemy who wanted me dead, quite honestly. He wanted me to say…

THIS IS TOO HARD!

I CAN’T FACE THESE ATTACKS!

I WAS BETTER OFF BEFORE I FOLLOWED GOD!

Let’s face it. He didn’t care about me before I walked with God! I was irrelevant to him. I was no threat. In fact, sometimes it probably seemed like I was an ally by avoiding the Lord at all costs. But now….oh NOW he cares…

So, does me having faith in the Lord make me weak? No! I am MORE than a conqueror, not less!

Weak would be doing whatever I want!

Weak would be refusing to admit that I wasn’t my own god! Wow, imagine that!

I will say it once more; weakness is refusing to admit that there is a God who has a standard of righteousness and that you might just need to give up some things YOU want to hold onto because they give you a sense of power and authority.

Weakness would be refusing to give up ALL my vices and face ALL my inadequacies and give my life over to God and face all these battles and attacks head on (although never alone).

No! That is not weakness. That is strength!

A strength that comes from having the honesty to admit I am NOT all that and I do NOT control everything!

Strength that makes me admit that although the world DOES in fact revolve, it just isn’t around me!

A strength that comes from having the honesty to admit I am NOT all that and I do NOT control everything! Strength that makes me admit that although the world DOES in fact revolve, it just isn't around me! Click To Tweet

You see, we are at war, and warriors don’t run!

Warriors stand and they fight! Warriors follow their commander! I am more than a conqueror because I follow the One who goes before me into battle!

Some people love to just sing songs about how Jesus loves us and how we have the victory in Jesus but ignore the fact that there is a battle raging all around them!

Some people love to just sing songs about how Jesus loves us and how we have the victory in Jesus but ignore the fact that there is a battle raging all around them! Click To Tweet

I Am More Than a Conqueror Because I Have Victory in Yeshua!

Yes I am more than a conqueror! WE are more than conquerors! We have victory! But victory over what?

Victory is defined as “an act of defeating an enemy or opponent in a battle, game, or other competition.”

Did you catch that? Defeating an enemy or opponent.

We have victory over sin and death!

No, there is no cloud hopping here!

If the Lord didn’t expect me to do battle then why did He arm me with the full armor of God?

What Are the 6 Pieces in the Full Armor of God?

Those are the pieces of armor but with those there is prayer, praying in the Spirit. I am more than a conqueror THROUGH Him!

This means not fighting on your own power but putting on your armor and then seeking the Lord as to what to do next!

You notice there is nothing to guard the back? That is not only because you shouldn’t be running from the enemy but because you have all of Heaven’s armies behind you. The Lord is your rear guard!

I Am More Than a Conqueror Equipped for Battle

I don’t see a crutch anywhere on that list!

There’s no crutch in my arsenal.

I have armor. I have weapons. I have a Messiah. I have a Commander and King. I have the Word of God!

Hashem is Lord of Heaven’s Armies and THROUGH him I have the victory! I am more than a conqueror in him!

There's no crutch in my arsenal. I have armor. I have weapons. I have a Savior. I have a Commander and King. Click To Tweet

We Are More Than Conquerors THROUGH Him

Let me make this clear, it says WE are more than conquerors through the Lord!

In other words, He doesn’t surround us in a spiritual bubble and keep everything bad out. We do go through bad things and we go through attacks!

People have free will, evil does exist in this world and we do have a real enemy.

God never said weapons wouldn’t be formed. He said none would prosper!

There WILL be attacks against the people of God, just as in every battle!

But he does make sure we are armed and equipped for when the battles rages at our doors!

He DOES ensure we have the ultimate victory!

I am more than a conqueror and so are you!