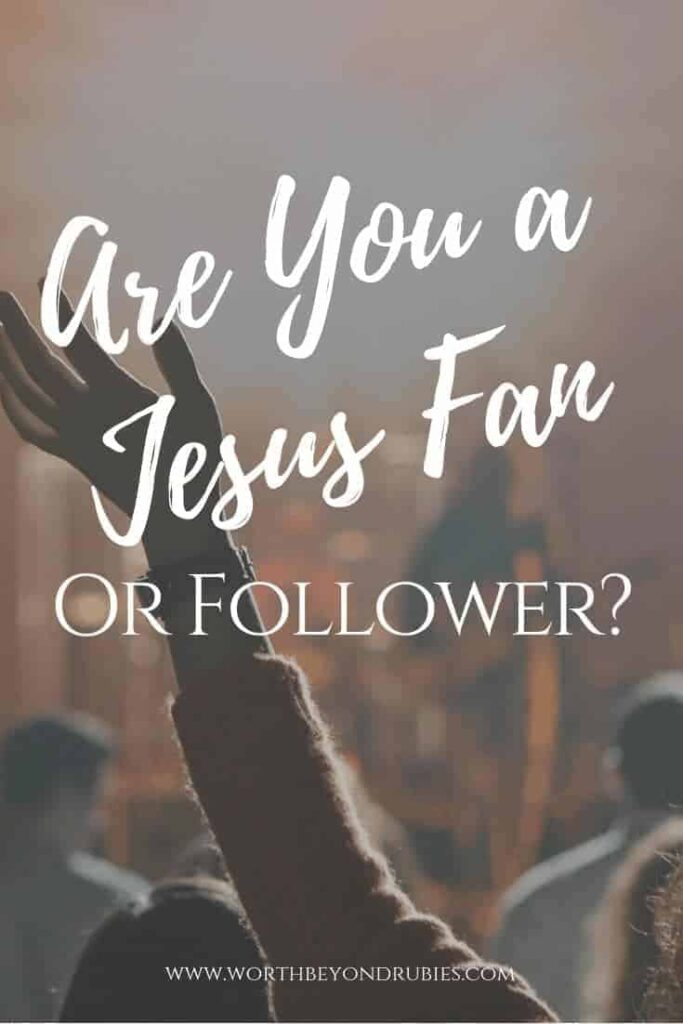 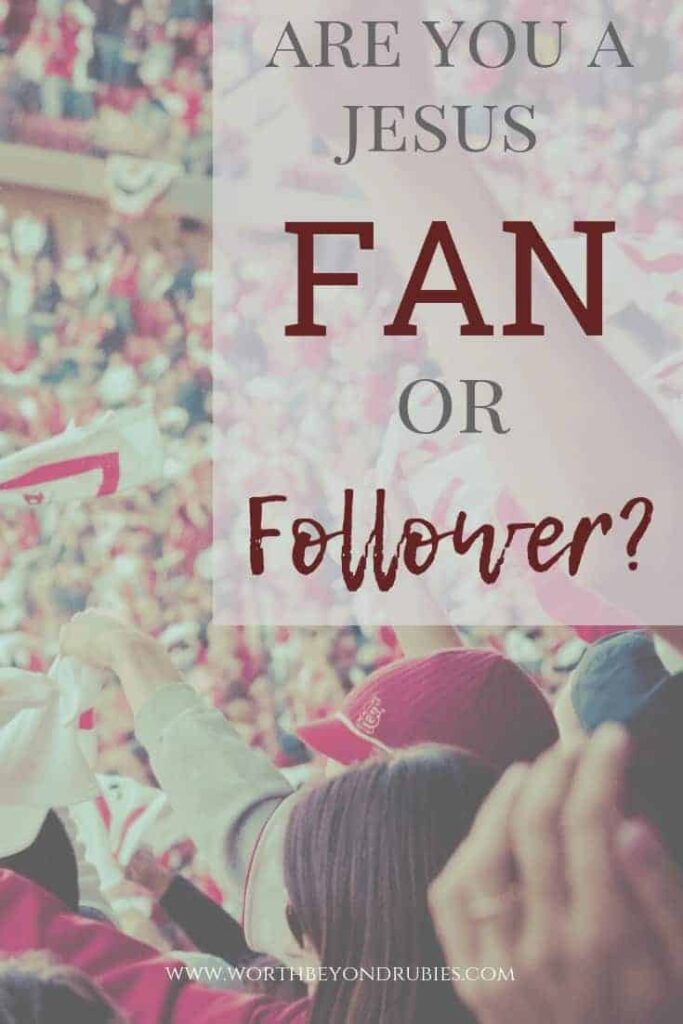 When it comes to your walk with God, are you a fan or follower?

What? A fan or follower…of God??? Yes, when you get right down to it. So which do you think you are? You may not think there is much distinction, but there is a significant difference between the two! Read on to learn which describes you!

The Difference Between Fan or Follower

Most people wouldn’t think there was much difference between being a fan or follower. After all, when you are a follower of something or someone, aren’t you also a fan? Yes, usually that is the case when you examine it from that perspective.

However, when you flip it around, you can be a fan of something or someone without being a follower.

I will use a sports analogy to illustrate.

My husband and I are AVID New England Patriots fans! We love the team and never miss a game!

My husband can not only tell you the name of every single person on the team but he can tell you their height, weight, and where they went to college.

Ok I will let you in on a little secret; not only can he do that with the Pats but with every other team in the NFL. He has a photographic memory for stats and he really takes an interest in football in general. I am not quite that well versed in their stats but I do know quite a bit about them.

My husband is engrossed in every draft! It is like a holiday in our home, as is the first day of both the pre-season and the regular season. When the Pats make the playoffs and/or the Super Bowl…forget it!

So my husband and I are fans, but we are also followers.

We know everything about them, follow them closely and they are a big part of our lives. It doesn’t matter whether they win or lose, we will be there watching every single game, every single season. Even our house keys are Patriots themed!

Fans, on the other hand, may like the team, may watch the games, and may know some of the players. They may come out in droves when the team makes the playoffs and the Super Bowl but they don’t follow every detail of the team.

They may even stop watching for a while if the team is not doing well (or when Tom Brady goes to Tampa). After all, they don’t want to spend their day watching their team lose!

Fans can be fickle where followers are loyal and embrace it as part of their lives, come good or bad.

For instance, a fan of a hamburger chain may love to eat their burgers until a new chain opens up that they like better. Then they may stop going and instead frequent the new place. However, a follower is a fan that sticks with it even when something else rolls around!

The difference is loyalty and commitment.

Peter – Fan vs Follower of Jesus?

Let’s look at Peter for a moment. Was Peter a fan vs follower of Jesus?

Most people would definitely call Peter a Jesus follower, but was he?

On the surface he appeared to be. He did ‘follow’ Jesus almost everywhere. But, like fans of football, Peter bailed when Team Jesus appeared to be losing.

When Jesus was arrested and a girl pointed at Peter claiming he was one of Jesus’ followers, Peter denied even knowing Him. In fact, He denied Jesus three times and ran.

To him, his team had not only lost, it had been dismantled! He may have thought at that moment that it had all been for naught. He certainly wasn’t going to put his life on the line for what he now must have considered a total loss.

Jesus went to the cross with one follower out of the twelve; John. John followed Jesus to the cross and beyond.

The rest were fans at that moment in time.

Are YOU a Jesus Fan or Follower?

So I ask you again; are you a fan vs follower of Jesus?

Do you waver in your commitment to Him when life gets tough? When it seems like your prayers aren’t being answered, do you question your faith? Or do you stand on His Word, steadfast and trusting that He is working in your life for your good and for His glory?

Do you proclaim your faith without wavering, no matter what anyone thinks of you? Are you willing to walk away from things in your life that you hold dear because they are not pleasing to God?

Do you believe in Him and incorporate Him into all areas of your life, no matter what the odds or what the cost? Have you fully surrendered all to Him, regardless of what you may have to give up or what old habits you may have to walk away from?

Are you willing to give your marriage, your home, your children to the Lord and welcome Him into all parts of your life?

Are you a fan or follower?

Grab your FREE Gratitude Journal Mini Printable Pack below as my gift to you!