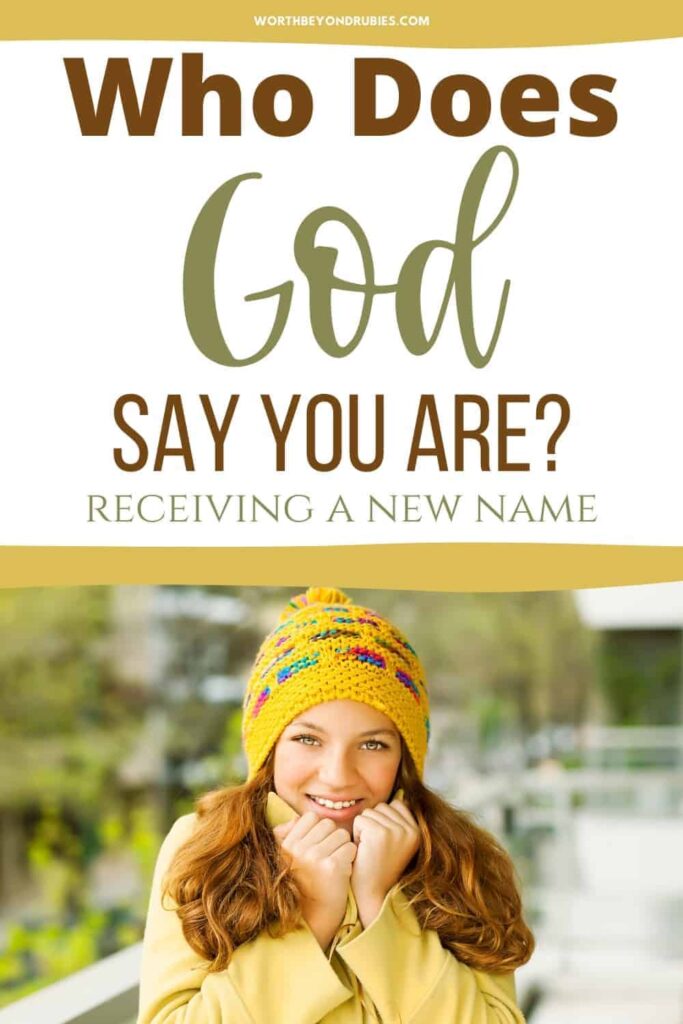 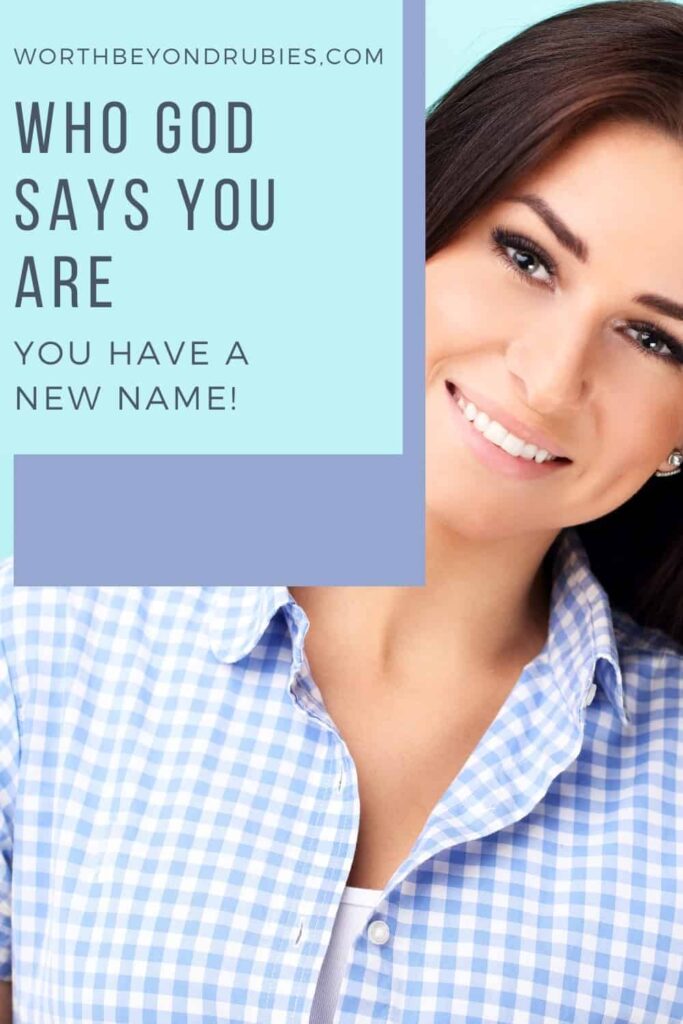 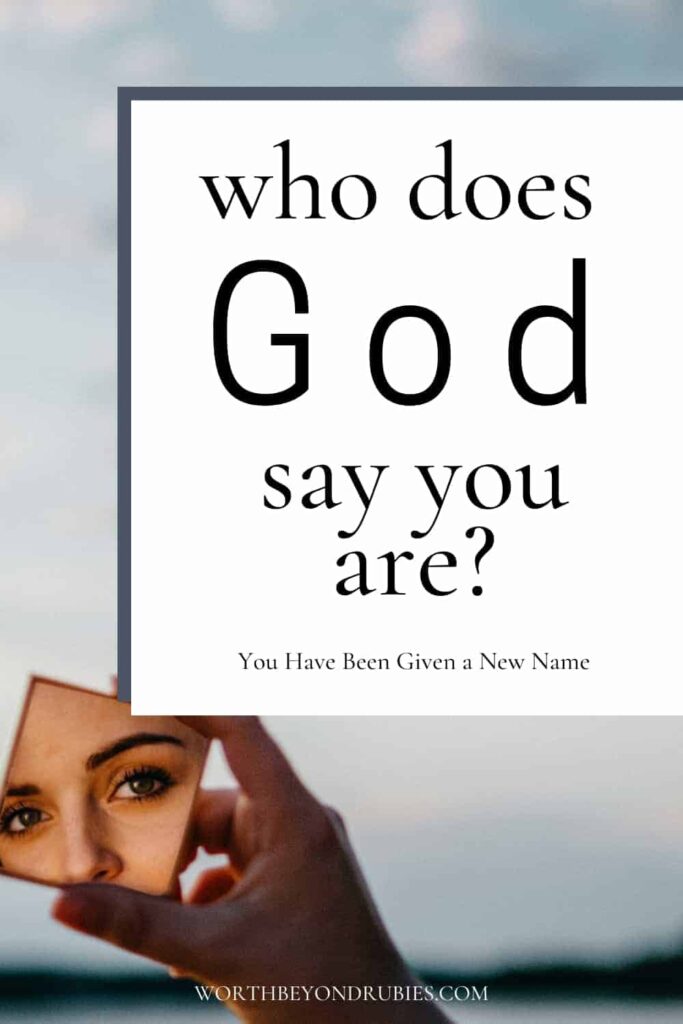 We live in a world that loves to tell us all about ourselves. It labels us, it defines us, it can crush our hopes and dreams in an instant by telling us things about who we are that we believe. It could be parents who told us we weren’t smart enough, a friend who tells us our dreams are ridiculous, co-workers who say we will never get that promotion. But who God says you are is far more important (and truthful) than what the world tells you!

God will not only give you your identity if you put your faith and trust in Him, but He will write on you a new name!

Let’s look at how God defines us and who does God say you are!

Who God Says You Are – He Gives You a New Name

We are often given our names based on certain traits our parents want us to have or traits we may even have before we are born! I know some of my kids certainly showed their personalities even before birth!

So parents have time to see their child’s traits and give them the names they feel either suit them or want to define them as children of God. A name is extremely important because it is not only what they are called but it is descriptive of them.

Who God Says You Are: Biblical Examples of Receiving a New Name

We have several examples in scripture of the Lord giving people new names; names He Himself determined.

Sarai which means “Princess or Lady” was changed to Sarah, which comes from the Hebrew root שרר which means ruler or minister. So in her case, it would be a female leader, a minister. This is fitting seeing she was to be the matriarch of the Jewish people.

Jacob, which means “Supplanter” (to read more about why he was called by that name, visit my post on Jacob and his brother Esau) was changed to Israel which means “Contends with God or Wrestles with God”. We know this to be the case with Jacob when he wrestled with the Angel of the Lord and won. As well, according to the verse, Israel has had to contend with men as well but has always prevailed, Baruch HaShem!

We also know “supplanter” was fitting for Jacob since he tried to hold his brother Esau back in the womb so he could be born first! When that failed, he then went on to trade a bowl of stew for his brother’s birthright as the firstborn.

We know Abraham did in fact go on to be the father of many nations, being the patriarch of the three major world religions.

Jacob did wrestle with God and won, as Israel (which he would then be called) has wrestled with God throughout history and yet remains God’s people and the apple of His eye, remaining in covenant with Him throughout the ages and giving the world the Messiah.

And, as I said, Sarah is the matriarch of the Jewish people and even today the line of the mother is what determines Jewish descent (although many sects are also accepting the line of the father now).

What Are You Called?

You were given a name at birth. This may be a name that may have been given based on its meaning or, in secular society may just be a name your parents liked! Maybe you were named for a relative or someone meaningful to your parents.

But aside from your actual given name, what are you called?

You see, your name is a defining word or characteristic you take on. Your parents named you, but the world can name you as well.

Or they can be the opposite:

Which names have you called yourself?

So many kids in today’s society commit suicide because of names. The cruelty of others can heap names on a child to the point that they feel they are flawed, no good, will never amount to anything, and that they are not nor will ever be loved.

But what if you could look past the labels of the world and look at what the Lord calls you and who God says you are? How much more valuable would those precious lives feel if they knew that the cruel words of people cannot compare to how God sees them?

Bible Verses About Who God Says You Are

In my house, within my walls, I will give them power and a name greater than sons and daughters; I will give him an everlasting name that will not be cut off.

You will leave your name behind as a curse for My chosen ones, and Adonai Elohim will slay you. But He will call His servants by another name.

He who has an ear, let him hear what the Ruach is saying to Messiah’s communities. To the one who overcomes I will give some of the hidden manna, and I will give him a white stone—and written on the stone a new name that no one knows except the one who receives it.

The nations will see your vindication and all kings your glory. Then you will be called by a new name which Adonai himself will pronounce.

Your eyes saw me when I was unformed, and in Your book were written the days that were formed—when not one of them had come to be. How precious are Your thoughts, O God! How great is the sum of them!

Aren’t sparrows sold for next to nothing, two for an assarion? Yet not one of them will fall to the ground without your Father’s consent. As for you, every hair on your head has been counted. So do not be afraid, you are worth more than many sparrows.

God’s power has given us everything we need for life and godliness, through our knowing the One who called us to his own glory and goodness. By these he has given us valuable and superlatively great promises, so that through them you might come to share in God’s nature and escape the corruption which evil desires have brought into the world.

Jacob was not defined BY his name, HE defined his name!

Abraham was not just A father, he was THE father of many nations! His descendants are too numerous to count, as God promised.

No matter what the world says about you, God has a plan and purpose for your life and for His glory!

You are never too broken or flawed for God to use!

God knows what you’ve been through. He knows the names you’ve been called (or called yourself) and He is there to tell you that it is HE who names you, not the world!