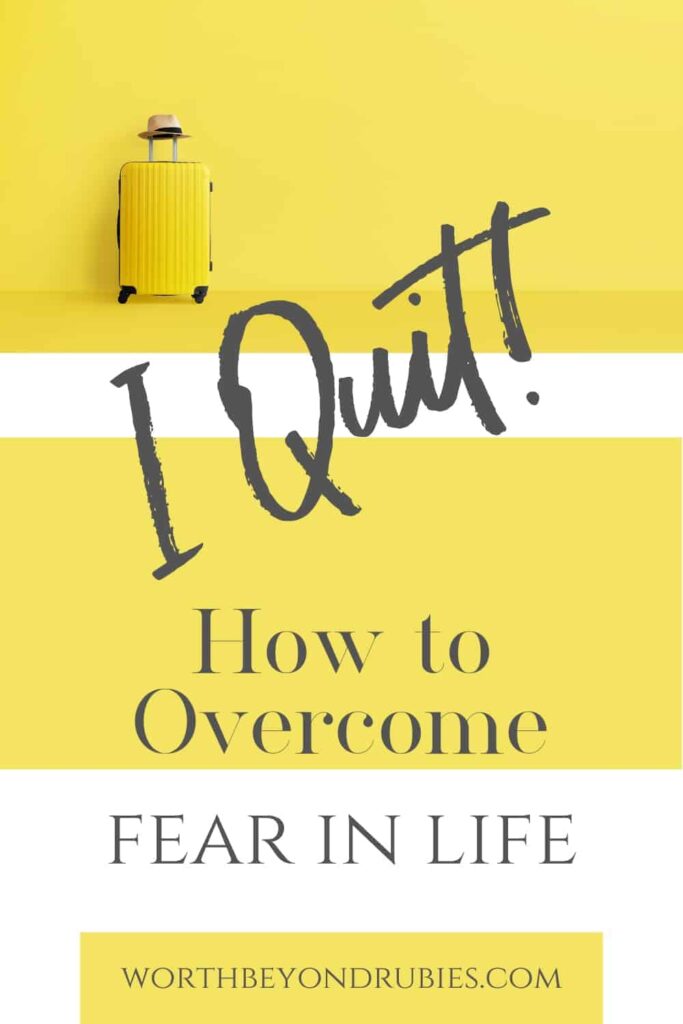 “I quit!” It’s not that I ever truly said those words out loud, but they were most certainly the end result of what fear of failure was doing to me. I quit everything! I was so afraid of failing that I would end up quitting before I could actually fail at something. After all, then it was on MY terms! I learned to defeat that fear and you too can learn how to overcome fear in life and live in victory!

I Quit Everything – Was I Really a Failure?

I literally would just quit everything I started!

I would begin projects or businesses or even relationships only, later on, to give up on them. I would just abandon them while in progress and, sometimes, even when they were thriving!

I never seemed to ever finish ANYTHING and I could never understand why that was the case.

It wasn’t that I didn’t enjoy what I was doing. In fact, in most cases I loved what I was doing. But no matter how much enjoyment a project gave me, it would eventually get filed in the archives with every other project I had ever started!

Why? Why could I not ever seem to complete anything?

Some people may look at someone like me and think they are lazy. Maybe they are flaky, maybe unmotivated, maybe selfish.

But it is not any of those things. It is something far deeper; something more hurtful.

When I was twenty-four years old, I heard words spoken over the phone that would stay with me decades.

The words cut like a knife and caused scars just as deep as if they came from one. They were words spoken by a very close family member.

The words cut like a knife and caused scars just as deep as if they came from one.  They were words spoken by a close family member.

There were some people at the house that day to do a job in the yard. This family member called me on the phone and asked me to try to catch the workers when they were on their way out and ask them to give him a call. This was WAY before cell phones were a thing!

My daughter, who was four years old at the time, was playing in her room and, shortly after I hung up the phone, she began crying. So of course I got up and ran in to see what had happened.

I was doing what any mother would do.

While I was in her room comforting her, the workers had left. It was only a few minutes but I had missed them.

So then I immediately called this relative on the phone

to tell them I was sorry but my daughter fell and I had to go help her. And that is when he said the words…

Words like those hurt no matter who they come from. But the pain is deeper when it comes from someone that is supposed to love you. The weight of those words can be heavy and they can last a long time; sometimes even forever.

And it was those words that would start a cycle that would culminate in me never finishing things in my life.

It started to seep into the core of who I was; a failure. I believed it. After all, it came from someone close to me, someone I trusted. I wore them every day like a weight around my neck.

It wasn’t just those words by themselves, but the cutting remarks that would come from this person from that point onward. However, the words ‘you’re a failure’ were by far the most damaging because they summed up everything this person would ever make me believe about myself over the years.

I felt, without realizing it, that if I just quit something, if I just walk away from it, then I can’t fail at it. If I give up BEFORE I can fail, then this person can’t be proved right.

It was on MY terms. It was MY choice. Therefore, it wasn’t a failure if I just made my own decision to quit!

These words didn’t just make me feel like a failure, they created this intense fear that I lived with every day!

I had to learn to overcome that fear in my life or I would prove him to be right!

I Quit Everything – A Self-Fulfilling Prophecy

” he had spoken over my life (you’ll ALWAYS be a failure), I WAS indeed proving him right.

I WAS failing. It was just that I was choosing it rather than letting it choose me. Every time I had given up on something was a time I failed.

I had let him win by giving up out of FEAR!

I was failing. It was just that I was choosing it rather than letting it choose me.

We all know this acronym for FEAR. It is truly accurate.

What I was facing were these words; nothing more than words. I was giving mere human words the power to hurt me, but worse than that was I was giving them the ability to mold me into someone God never intended me to be.

These words, these lies, carry weight only when you give them more faith than what God’s Word says!

But I hadn’t learned that yet at that point!

You see, I had actually succeeded in life up until that point. I had always been a good student. I had friends, a beautiful daughter and I had a business that I was working from home at the time that was successful.

I HADN’T always been a failure! But that lie was about grow to truth.

After about a year of building a successful business, I quit.

I started college, I quit.

I was fearing failure where I had not even experienced it just because this person labeled me!!

Now to clarify, I was not saved yet at the time. That would come later. But I firmly believe the enemy was setting me up to fail at even that way before it happened!

Overcoming Fear of Failure and Rejection

After I was saved I thought I would have the victory! I thought this would all change and that my faith in God would be enough for me to be able to finish what I start! I would finally not feel like a failure because God says

Who I am in Jesus

“..and in Christ you have been brought to fullness. He is the head over every power and authority.” Colossians 2:10 NIV

“…even as he chose us in him before the foundation of the world, that we should be holy and blameless before him. In love…”
Ephesians 1:4 ESV

“Little children, you are from God and have overcome them, for he who is in you is greater than he who is in the world.”
1 John 4:4 ESV

“ I can do all this through him who gives me strength.”
Philippians 4:13 NIV

But that wasn’t the case! I was still giving more weight to what people said! And that affected my faith and it affected what I thought God must have felt about me too.

I began to feel unaccepted. In other words, I felt like somehow I had slipped under some spiritual VIP rope and snuck in but wasn’t truly supposed to be there. Like somehow I got God on a technicality but wasn’t really wanted even by Him.

I felt like somehow I had slipped under some spiritual VIP rope and snuck in but wasn’t truly supposed to be there. Like somehow I got God on a technicality but wasn’t really wanted.

had nothing to do with me!

I Quit Everything, Including my Faith!

So I fell away

from my relationship with God. I backslid somewhat. I couldn’t even accept that even HE could love me.

Now, I didn’t truly quit. Deep down I still had my faith in Jesus

. I never walked away from that. But I lacked the relationship. I wouldn’t go to God. I felt like I wasn’t worthy to. My belief in Him was there but I didn’t walk in it. I felt like an outsider. Unwanted. Unaccepted. Uninvited

. Because that was how this person had made me feel.

I felt like if this family member had this opinion of me, this person who was supposed to care for me, maybe God felt the same way about me. Maybe I just wasn’t good enough for anyone!

I stopped trying to know God deeper because I was afraid He would see me the same way this person did. If I just kept this distance between me and God maybe He wouldn’t notice what a mess I was.

Oh but He notices! And He gives us grace and gives us beauty for ashes.

Oh, and there was loneliness. I didn’t even feel my Christian sisters

wanted to know me.

I still go through that today at times, like somehow they will see I snuck in! So I kept everyone at a distance and only built surface friendships. I tried to be everything to everyone so that people wouldn’t see the failure this person said I was.

How to Overcome Fear in Life

completely, but I didn’t.

I still struggle to believe what God believes about me and it is a daily exercise in the Word to keep reminding myself of who He says I am.

If someone ignores me I automatically go to a place of “I’m not good enough”. It’s a constant struggle to give these thoughts over to God and rebuke the devil and his lies!

THEY ARE ALL LIES!

But daily I spend time in His Word and daily I remind myself what He says about me. Daily I go to verses that tell me about His love for me.

I am not perfect but I am not a failure either!

I don’t blog to tell you how perfect my life is. Blogging is so I can share my struggles, my pain, my reality! I do this because I hope to be able to show even one person they are not alone!

Being a believer and being a blogger doesn’t mean we have our stuff together. We just share our messes! It means we lean even more on a God who can fix our messes and, in time, help us to see ourselves the way He sees us, not the way the world sees us.

Learning how to overcome fear in life, especially the fear of failure, starts with replacing those old recordings with God’s Word!

I am not a quitter! Unless God tells me it is time to let go of something, I keep at it! Believe me, I have been tempted more than a few times to quit blogging! The enemy comes in with that comparison game!

I am NOT a quitter!

And grace by grace, God is helping me believe that!

What are some ways you have learned to overcome fear in life with God’s Word? Share in the comments!

Being a Christian and being a blogger doesn’t mean we have our stuff together. We just share our messes!