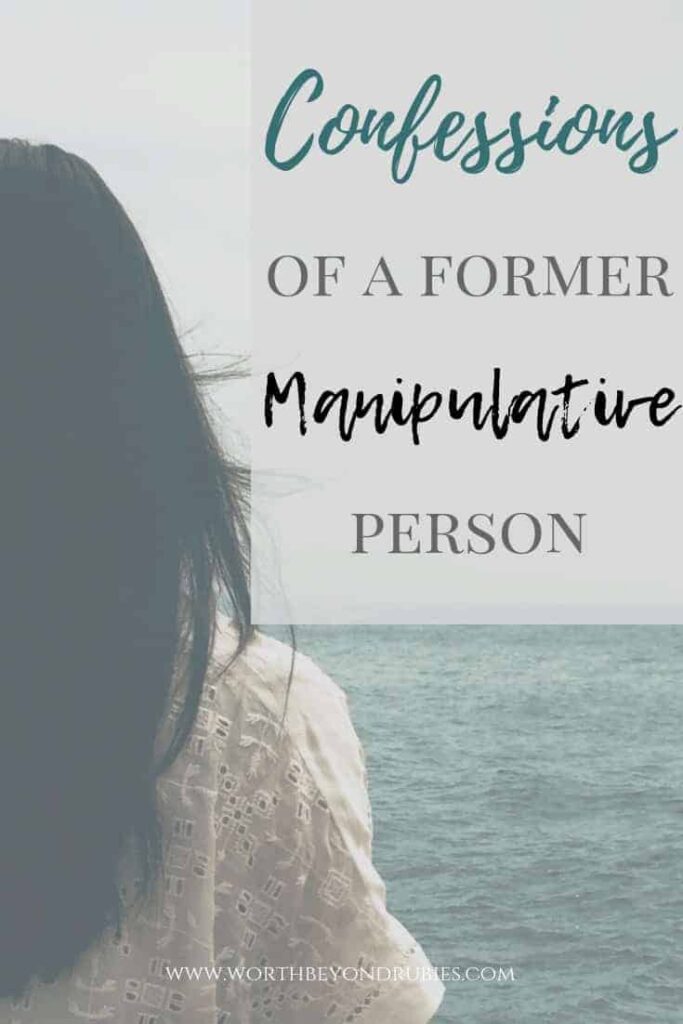 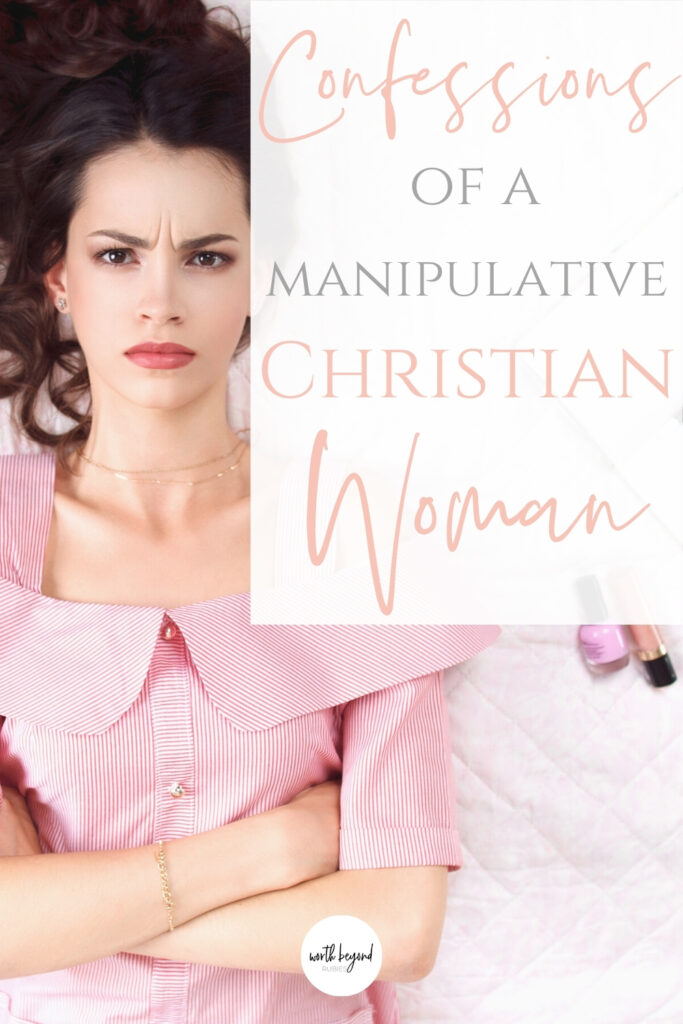 Most people who meet me today would never guess I was once a manipulative woman. Well, at least I hope they wouldn’t guess!! But oh, I was! And I was good at it! Really good at it! So how does one go from being spoiled and manipulative to giving it all to God? Read on to learn more!

My manipulative behavior started at a very young age.

I had a wonderful, loving, doting father. I was his world and there was nothing on earth he would not give me if I wanted it. Problem was, I knew it from a very young age.

When he and my mother divorced, he began to spoil me. He had always spoiled me really, but it ramped up when they divorced.

I became very aware, at a young age, that whatever I wanted, I got. My weekends consisted of going to the zoo, eating at Burger King (which was a real treat in the ’70s), going to the amusement park, taking the Staten Island Ferry and, my favorite, going for pony rides. And that is just the things we did; it doesn’t even begin to count all the things he bought for me.

This went on from when I was four until my mother and stepfather moved me to Long Island from Manhattan when I was eleven. My father lived on Staten Island so it was a short distance to where I lived in Manhattan so I saw him most weekends and I usually spent them at his house.

When we moved to Long Island, that changed.

Becoming a Manipulative Woman Began With a Very Loving Father

I didn’t get to see my father every weekend anymore. I now usually only got to see him once or twice a month.

In order to make up for seeing me less, he began to spoil me even more.

He would take me and my friends wherever we wanted to go! And, he would buy me whatever I wanted.

I was probably one of the only kids I knew who, at my young age, had a room that was more like a studio apartment! He also bought me records and anything else I wanted and gave me a generous allowance.

Don’t get me wrong; he wasn’t rich by any means. But what he did have he devoted to me.

I never learned the word “no”. Even my mother gave me pretty much anything I wanted. I never went without anything.

It wasn’t that he was buying my affection; he already had it and he knew it. It was more like he was trying to make up for not being there all the time and the best way he could think to do that in the short time I had with him was to give me all the comforts he could.

But it did some damage in the long run. It made me into a manipulative person, even though I didn’t intend to be.

As a manipulative person, I began to equate love with getting anything I wanted.

I eventually grew up and got married and my dad passed two years later. As an adult, I was no longer interested in things! I was older and I had a child of my own so I had grown accustomed to not having things for myself. But it didn’t change my desire to get my own way.

I began to manipulate through emotions.

I knew as a kid that my dad didn’t like to see me cry! If he ever tried to say ‘no’ to me, the tears would well up and he would cave. I didn’t know how to cope with ‘no’. My husband now was no different. So I would use these manipulation tactics to get him to give in.

I would just turn on the tears when I wanted something, knowing I would most likely get it. It wasn’t things all the time, but just my own way.

Now, I didn’t do it consciously! I didn’t stop and think about crying to get what I wanted. I didn’t fake cry! It was very real! That spoiled child came out in full force! Being a manipulative woman doesn’t always involve a conscious effort to manipulate.

Some people manipulate through faking emotions but mine were very real. I didn’t even think about it. It was just a learned reaction. I had never learned to cope with “no”. In all fairness, I had never been taught to do so.

I didn’t know how to manage my emotions when I was let down. I never learned how to wait or how to accept ‘no’.

It was emotional manipulation tactics even though the emotions were very real. I was still getting my way using tears because it was a learned behavior. I may not have been trying to manipulate but that was most certainly the result.

I Was Even Manipulating God

When I was saved, it carried over to my relationship with God.

I would ask God for what I needed (or wanted) and I would actually ‘cut deals’ with Him!

Have you ever tried to ‘strike a deal’ with the Lord? Let me know how that worked out!

I would make promises that sounded like “if you just do this for me, I will give up _____” or any other combination of conditions to be met.

And I even used to justify it by calling it “putting a fleece out”.

Putting Out a Fleece – Striking a Deal with the Lord?

But Gideon Did It!

I would think it was spiritual to do! After all, Gideon did it.

But it was all just me manipulating God to bless me or to even just show me some sign about something!

I was being a manipulative woman even though I never intended to be. But I just didn’t know any other way.

Learning to Lean on Jesus

One day I was praying my usual self-centered prayers,asking more of what God could do for me than what I could do for Him. I was seeking His hand more than His face.

I went to the Word afterward and came across these verses in Colossians 3:9-10

What struck me about these verses was where it said “since you have taken off the old self with its practices and have put on the new self, which is being renewed in knowledge in the image of its Creator”

I had been saved! Yes I had given my heart to the Lord. But I hadn’t given myself over to Him! Here I was expecting Him to give Himself over to me! I was expecting God to fit His way into my life and my way of doing things rather than conforming to His will!

Even being saved, I hadn’t changed anything! I had not taken off my old self and put on the new and allowed myself to be renewed in the image of God!

There I was expecting God to indulge me where I was.

I had been saved! I had given my heart to the Lord. But I hadn't given myself over to Him! Here I was expecting Him to give Himself over to me! Click To Tweet

Be Transformed by the Renewing of Your Mind

Make no mistake, God will always meet you where you are but He also expects you to move on from there and “be transformed by the renewing of your mind” and I had not! I had not allowed Him to transform that manipulative woman into a person renewed!

I had not experienced that transformation. I was so accustomed to getting what I wanted that I wasn’t looking at what God wanted (or anyone else for that matter).

You see, I was at the height of selfishness even after giving my life to God.

The problem was, I gave Him my life and my heart but I was expecting Him to show love the way everyone else had; by granting my every whim.

I had not been transformed because I had not allowed the Word to instruct me in what love truly was.

Problem was, I gave Him my life and my heart but I was expecting Him to show love the way everyone else had. Click To Tweet

I had learned that love met conditions. Love did for me. It gave to me. Love let me have my own way.

God, through His Word, showed me that…

I had learned that love met conditions. Love did for me. It gave to me. Love let me have my own way. Click To Tweet

Love is not self-seeking. Love does not dishonor others. Wow!

I had never even considered how by being a manipulative person I was not only dishonoring God but I was dishonoring my husband!

Then I let God do a work in me that required me to learn to trust that my husband still loved me even when he didn’t do what I wanted. Sounds simple but after a life with the wrong thinking, it wasn’t.

I had to learn that love didn’t equal things or conditions. It meant learning to love unconditionally!

God blessed me with a husband (not my first, but my last) who was a safe space to learn that lesson! I am happy to say, I don’t use that manipulative behavior anymore. I now know it is perfectly fine for my husband to say ‘no’ and it doesn’t change a thing about how he feels about me!

Do I always agree? Of course not! But I let him lead and I don’t use manipulation tactics to change his thinking.

His patience and God’s leading have transformed my mind and my heart! I am no longer that same manipulative person. Now I no longer use emotional manipulation tactics to get what I want. I have learned how to give and receive love the way God intended.