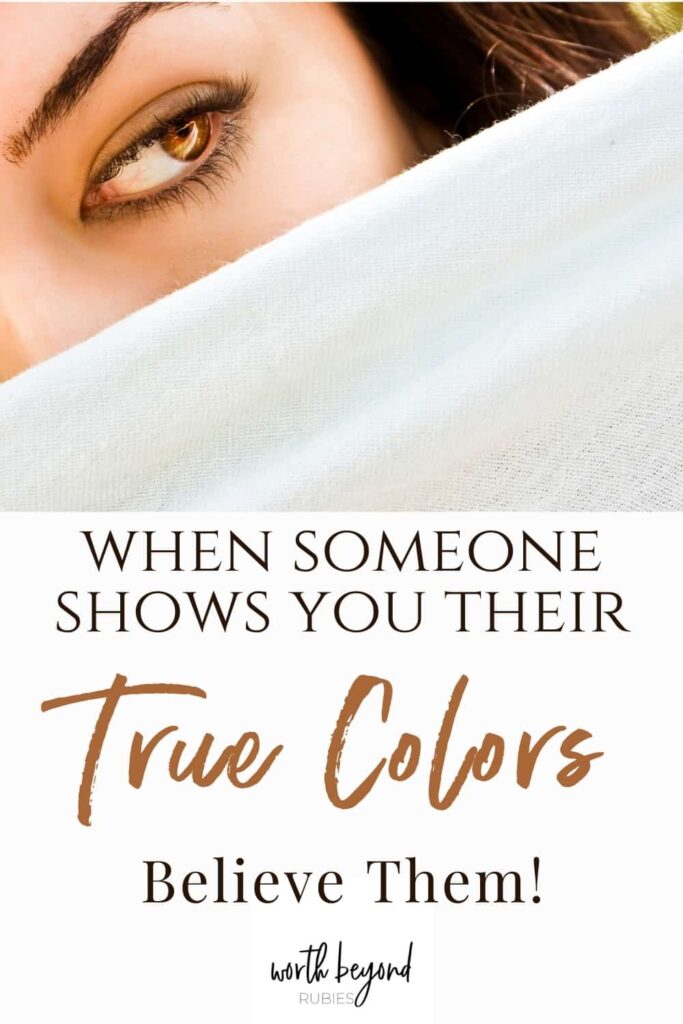 If you are around my age or older, you probably remember the song by Tom Jones, “Why Why Why Delilah?” Well, I am sure one of our Biblical heroes said that very thing! Sometimes in life, we can be staring the truth in the face and choose to ignore it. Even worse, sometimes we believe we can change it. We need to recognize that it is only God that can change a person’s heart.

So let’s dig in to the story of Samson and Delilah and learn how to heed the warning signs when someone is waving them right in your face!

What the Bible Tells Us About Samson

In Judges 16, we find the story of Samson and Delilah.

The Bible tells us that Samson was a man of incredibly great strength who had been dedicated in service to God upon his birth.

Samson’s mother remains nameless in the Bible but we are told she is the wife of a man named Manoah. She had been wanting a child but had been barren.

The Angel of the Lord (indications are it was the Lord Himself) appeared to her and told her she would conceive a son, but she was to drink no wine nor eat anything unclean. She was also instructed to not ever let a razor touch his head because he was to be a Nazirite, in service to God, and would rescue his people from the Philistines.

Judges is a book which tells us time and time again of how Israel had disobeyed the Lord and done evil, so they had been delivered into the hands of the Philistines. But now, this Nazirite was to bring them deliverance.

Samson’s mother tells Manoah all the “angel” had told her so he seeks to have a visitation with this angel to find out what needs to be done to bring this son up in the ways of the Lord. The Angel of the Lord returns and tells him once more, his wife was to have no fermented drink or eat anything unclean and reiterates that they are to do all He told Manoah’s wife; no razor should touch his head.

She goes on to give birth to a son and names him Samson. She does all the Angel of the Lord commanded her.

When Someone Shows You Their True Colors – And Oh Boy, Delilah Does!

We also meet a very different type of woman named Delilah who was a harlot. But oh how she caught the attention of our friend Samson!

Unfortunately, Delilah wasn’t exactly as devoted to Samson as he was to her. She was paid 1,100 pieces of silver by his enemies, the Philistines, to find out what the source of his strength was so that they could defeat him and kill him.

Samson had been a big headache for the Philistines. He was a real thorn in their side! He had killed more than his fair share of them and they were now dedicated to getting rid of him.

When People Show Their True Colors, You Can Choose to be Color Blind

Samson was totally infatuated with Delilah. He was deeply in love with her in fact. So, the Philistines knew she would be able to charm him into telling her his secret.

So, Delilah asks Samson what it is that could remove his strength, what was that one thing that could cause him to be defeated.

The first time he lies to her. He tells her that if he is tied with seven bowstrings, not yet dried, he will become weak like any other man.

That evening, while he sleeps, Delilah binds him with seven bowstrings that had been brought to her by the Philistines. Then she yells to him that the Philistines are upon him!! He wakes up and busts out like it was just string.

He lied to her for a reason! He didn’t fully trust her! Sometimes God reveals people’s true colors and we make a choice not to see it. That certainly seemed to be the case here. Samson clearly lacked trust in her but it didn’t stop him.

When Someone Shows You Their True Colors Trust Your Instincts

She proved his instinct correct. God was trying to warn him! God gave us that gut instinct for a reason. And she went on and betrayed him.

So, does Samson dump Delilah and run for the hills after this obvious attempt at removing his strength? Clearly Samson MUST have taken the warning THIS time??

Not only does he stay with her, but he also does it again! And then again a third time!!

You must read this and wonder what on earth he was thinking!! Dude, she is trying to get you killed!! This could qualify as a series on the Investigation Discovery channel!!

Is he SO infatuated with this woman that he completely throws reason out the window?? Yes! Yes he is!

He clearly knew something was going on if he thought to lie to her three times!! He clearly saw all the red flags!

After all, when people keep trying to kill you based on information your beloved is giving them, that’s a pretty big red flag! But he keeps doing it!!

When Someone Shows You Their True Colors – Being Transparent

Some of us do that in life! I’ve been guilty of it myself! It could be a relationship, a job, anything in our lives.

Delilah was showing Samson exactly who she was!

When someone shows you their true colors like Delilah did, they are being pretty transparent with you!

He could quite easily see she is trying to trap him, but he chooses to ignore the danger signs and stays with her!

Again, in her defense, she is being very overt about who she is! She is being quite transparent about it!

Fool me once, shame on you. Fool me twice, shame on me. She fooled him THREE times and doesn’t stop there!! Shame Samson, shame!

Fool me once, shame on you. Fool me twice, shame on me. She fooled him THREE times and doesn’t stop there!! Shame Samson, shame! Click To Tweet

So, after this, she really heaps it on. She pours it on like maple syrup!

YOU DON’T LOVE ME!

IF YOU LOVED ME YOU WOULD TELL ME HOW TO DESTROY YOU!

If You Really Loved Me

How many of us have heard that before?

IF YOU REALLY LOVED ME YOU WOULD…

IF YOU WERE A GOOD CHRISTIAN YOU WOULD…

But instead of saying ‘Bye Felicia’, or in this case, ‘Delilah’, he listens to her pestering him for DAYS about where he gets his strength from. Finally, he gives in. She wears him down and he tells her what would remove his strength from him.

He tells her it is his hair. If his hair is cut, he loses his strength and becomes just like any other man.

And, SURPRISE! What does she do? She has his hair shaved while he sleeps!! I know…you never saw that coming, right?

The Philistines come in and she yells to him yet again that the Philistines are upon him except, this time, he had no strength. He was unable to defend himself against them.

He is captured by the Philistines, locked up, blinded, and made to perform for them like a circus clown.

They had him taken to their temple of Dagon and he asked to rest against one of the pillars.

He then, obviously recognizes the error of his ways and prayed for Adonai to give him the strength to destroy them and the Lord answered his prayer. He tore down the temple like it was made of paper.

Ultimately he dies and takes thousands of Philistines with him.

Delilah was quite literally the death of him, and many others as well.

Yet through it all, Delilah was showing Samson exactly who she was! When someone shows you their true colors, heed the warning signs!

Delilah literally was the death of him, and many others as well. Yet through it all, Delilah was showing Samson exactly who she was! Click To Tweet

When Someone Shows You Their True Colors, Believe Them!

When someone shows you their true colors, when people show you who they are, BELIEVE THEM!

Don’t think it will change, don’t think YOU can change the person or job or circumstance, don’t believe a person will somehow magically change after you marry them. When someone shows you their true colors, good or bad, BELIEVE THEM!  LISTEN TO THE WARNING SIRENS!!

YOU cannot change them! Only God can change them! God is the ONLY one who can break through and change their hearts because that is where these issues lie! It is in the mind and the heart!

It doesn’t even have to be as severe as cheating or abuse! It can be simple annoyances!

If you have a great guy but he watches sports constantly and it drives you NUTS, don’t marry him thinking once you’re married you’re going to get him to stop watching!! You marry him if you KNOW you can live with him watching sports!!

He is showing you he is into watching sports all the time! Either accept that about him or don’t marry him. Better yet, start watching with him!! But don’t think you can change him! When someone shows you their true colors, that is who he is!

When you interview for a job, if they are letting you know up front you are going to be working a lot of hours with little pay, or that you will have to lie or compromise your integrity for sales, don’t take it thinking once you get in there you are going to change things! They are telling you how it is!!

When Someone Shows You Their True Colors, God is Waving Those Red Flags!

They are right there, waving in your face! When someone shows you their true colors, when GOD shows you someone’s true colors, BELIEVE THEM! Don’t turn a blind eye like our friend Samson did.

Get your FREE SOAP Bible Study Workbook below as my gift to you!