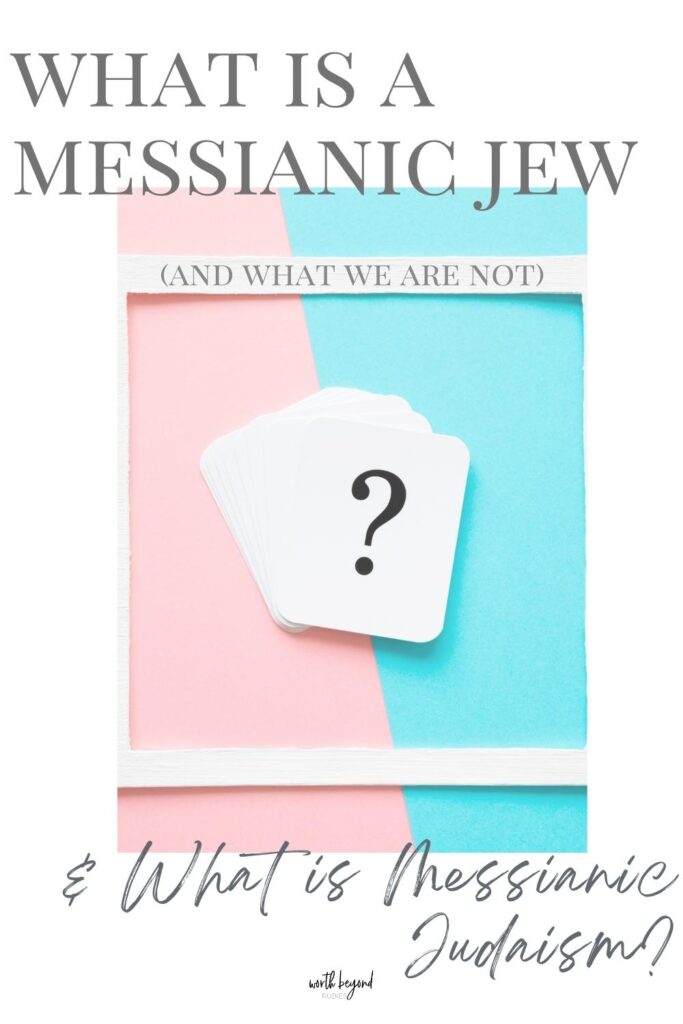 You may have heard the term Messianic Jew, even here on my site, and wondered “What is a Messianic Jew exactly?”. It’s a fair question that comes with other questions as well. What do Messianic Jews believe? Are Messianic Jews just legalistic Christians who keep Torah?

Well, read on and learn what a Messianic Jew is exactly and what we are not!

Table of Contents show
1 What is Messianic Judaism in the Modern Era?
2 What is a Messianic Jew?

What is Messianic Judaism in the Modern Era?

While they were not by any stretch of the imagination the first Jewish followers of Jesus (those were literally Yeshua’s own disciples in the Word of God), they were the modern movement of Jewish people coming out of the churches and deciding to live and worship like the wider Jewish world, in Jewish forms of worship.

They didn’t hate church. They didn’t dislike gentile believers. They just wanted to live their Jewish identity and Jewish culture.

Rabbi Paul Saal of Congregation Shuvah Yisrael (my own Rabbi) defines it this way:

According to Hashivenu, in which my Rabbi Paul Saal was instrumental, was founded as such:

They defined Messianic Judaism in their core values as follows:

A key definition of Messianic Judaism is the one stated by the UMJC or Union of Messianic Jewish Congregations. I have stated this definition in multiple places on this site already so I will only list their Basic Statement. If you want to view their Extended Statement, you can view it on their website.

What is a Messianic Jew?

So, given these definitions, although brief, of Messianic Judaism, we can then hone in on the question “What is a Messianic Jew?”

A Messianic Jew is a Jewish person who is Jewish first and foremost. So that is defined as someone born Jewish or who had converted at some point in their life.

They may have been born to Messianic believers themselves and grown up in Messianic synagogues with Jewish customs or they may have grown up in traditionally Jewish synagogues or in non-observant Jewish homes and then were introduced to Yeshua as Messiah of Israel at some point in their life.

However, the key to what makes one a Messianic Jew is that, as you see in the definitions offered above, they continue to live in their Jewish identity.

They keep a Jewish home. They take part in a Jewish community. Some even attend non-Messianic Jewish synagogues openly if there are no Messianic synagogues near them and, for the most part, are welcome and are a part of that congregational family!

There ARE Jewish Christians, for lack of a better term. These are Jews who choose to follow Yeshua within a church environment.

Perhaps they never knew a Jewish upbringing or their Jewish heritage and grew up within Christian churches and feel more comfortable there.

Perhaps they are married to Gentile Christians and choose to raise their children in the church rather than the Messianic Jewish community as observant Jews. We are all part of the body of Messiah and each person has to choose their own way of following Him.

Messianic Jews (and even many Jewish Christians) do not see belief in Yeshua as the Jewish Messiah as converting to Christianity, period…end of the story.

Christianity as we know it was not a “thing” in the early days of what we call the church. There were either Jewish followers of Yeshua or gentile followers of Yeshua and they prayed and worshipped together until about the middle of the 2nd century.

So Jesus Christ, Yeshua, a Jew, did not come to form a new “religion”. He came to bring the Jews AND all the nations to the God of Israel as one ekklesia or “assembly” of His followers.

To see a wonderful presentation on this, you can see Dr. Jen Rosner, my amazing professor from my Introduction to Messianic Judaism course and a highly respected scholar, giving a talk here on Messianic Judaism in Jewish-Christian Relations.

Jesus Christ, Yeshua, a Jew, did not come to form a new "religion". He came to bring the Jews AND all the nations to the God of Israel as one ekklesia or "assembly" of His followers. Click To Tweet

So a Messianic Jew is a Jew! Makes sense right?

We are Jews who believe in Yeshua (Jesus) as the Messiah and still maintain our Jewish identity and our Jewish traditions.

We are forging our next chapter, revealing God in the world.

We attend synagogue, we celebrate the festivals, we keep the Sabbath.

But we do NOT seek to tell non-Jewish believers in Jesus that they must do the same.

Again, if you feel that you ARE called to this and have a real leading by the Holy Spirit, I suggest you read my post on What is a Messianic Gentile.

If you want to learn more about what Messianic Judaism is and what is a Messianic Jew, this video from my friends at Two Messianic Jews will give you all the info you need!!