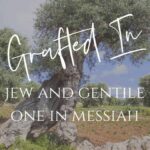 Paul, in Romans 11, speaks about the Gentiles being grafted in to the olive tree, but many times people read these verses without really allowing the meaning to sink into their spirit. We know that as Jew and Gentile, we are one in Messiah, but what is grafted in, in this chapter and for the Christian?

Grafted In Meaning Inclusion, Joined to the Promise

Now I am speaking to you Gentiles. Inasmuch then as I am an apostle to the Gentiles, I magnify my ministry in order somehow to make my fellow Jews jealous, and thus save some of them.

For if their rejection means the reconciliation of the world, what will their acceptance mean but life from the dead? If the dough offered as firstfruits is holy, so is the whole lump, and if the root is holy, so are the branches.

But if some of the branches were broken off, and you, although a wild olive shoot, were grafted in among the others and now share in the nourishing root of the olive tree, do not be arrogant toward the branches.

If you are, remember it is not you who support the root, but the root that supports you. Then you will say, “Branches were broken off so that I might be grafted in.” That is true. They were broken off because of their unbelief, but you stand fast through faith. So do not become proud, but fear. For if God did not spare the natural branches, neither will he spare you.

Note then the kindness and the severity of God: severity toward those who have fallen, but God’s kindness to you, provided you continue in his kindness. Otherwise you too will be cut off.  And even they, if they do not continue in their unbelief, will be grafted in, for God has the power to graft them in again.

For if you were cut from what is by nature a wild olive tree, and grafted, contrary to nature, into a cultivated olive tree, how much more will these, the natural branches, be grafted back into their own olive tree.” ESV

To understand what the grafted in meaning is in Romans, we first have to understand the meaning in general of being grafted.

Grafted, by definition, means to cause something to unite with a stock. It is a process within horticulture where the tissues of a plant are joined together so that they may continue to grow as one plant.

The grafted in plant has two parts; the scion, which is the upper part of the plant where you would normally see leaves, fruit, flowers, etc., and the lower part known as the rootstock.

The rootstock is what supports the plant and provides its nourishment.  The scion produces fruit and flowers! One plant was chosen for the strength of its rootstock while the other was chosen for what it produces.

Israel here is the rootstock. It gave the world their Messiah. It supports the branches. It supports you as a believer!

Grafted In – Joined to the Olive Tree

In the verses above, Paul is speaking to the Gentiles. He is explaining to them that salvation came to the Gentiles in order to provoke the Jews to jealousy so some of them would come to Yeshua.

He was cautioning them to not be haughty!

Paul is telling the Gentiles that the Jews are in unbelief for a time so that salvation could be extended to the Gentiles but, just as the “branches” were broken off to allow for the Gentiles to be grafted in, they too can be grafted back in at any time and since they are of the natural root, they will be easily brought back in to the olive tree.

In this, he spoke of Gentiles being grafted in meaning an adoption into the root, but the natural descendants who were temporarily broken off are always able (and He desires them) to be grafted back in.

Gentiles were blessed by covenant relationship with God THROUGH Israel, not replacing Israel!

You see, Yeshua never came to form a new religion! He didn’t “create” Christianity! He lived as a Jew and died as a Jew. He studied the Torah, He kept the Law. The Jewish Messiah was meant for the Jewish people! Many are, like me, Messianic Jews. We are Jews who have accepted Yeshua (Jesus) as the Messiah.

“I was sent only to the lost sheep of Israel”

But as Paul explains in these verses, He was rejected. They rejected the idea of grace instead of sacrifice. Many could not comprehend a suffering Messiah, a substitutionary sacrifice, even though they had just that in the scapegoat on the Day of Atonement.

Parable of the Wedding Feast

“Jesus spoke to them again in parables, saying: “The kingdom of heaven is like a king who prepared a wedding banquet for his son. He sent his servants to those who had been invited to the banquet to tell them to come, but they refused to come.

Then he sent some more servants and said, ‘Tell those who have been invited that I have prepared my dinner: My oxen and fattened cattle have been butchered, and everything is ready. Come to the wedding banquet.’

But they paid no attention and went off—one to his field, another to his business.  The rest seized his servants, mistreated them and killed them. The king was enraged. He sent his army and destroyed those murderers and burned their city.

Then he said to his servants, ‘The wedding banquet is ready, but those I invited did not deserve to come. So go to the street corners and invite to the banquet anyone you find.’ So the servants went out into the streets and gathered all the people they could find, the bad as well as the good, and the wedding hall was filled with guests.” NIV

Grafted In With, Not In Place Of

And, because of this rejection, their branches were “broken off” to allow room for the new branches to, not REPLACE them, but join in WITH them in the Messianic Kingdom to come. He spoke of being grafted in meaning ‘with’ and not ‘instead of’. As Paul said, they will easily be grafted back in as the natural branches!

“Lest you be wise in your own sight, I do not want you to be unaware of this mystery, brothers:  a partial hardening has come upon Israel, until the fullness of the Gentiles has come in.” ESV

Paul is careful to point out that this was a partial hardening of Israel so that the Gentiles could be saved!

It was to allow for all nations to know God of Israel, the Messiah and His saving grace. This is why he gives his cautionary advice to not ever become haughty and think you replace the Jews in the heart of God.

The Jewish people are NOT cast off nor are they rejected! They are still under covenant!

Believing they are cut off or somehow replaced by the ekklesia is called “Replacement Theology” and it is a dangerous tenet and an unbiblical one at that! God is NOT finished with the Jewish people and they have not been replaced! Far from it!

Gentiles have entered a covenant with God through the blood of Yeshua! You either accept Him or reject Him, but the choice is yours alone!

Grafted In – Jew and Gentile One in Messiah

I will tell you this, if you are a Christian and you hate Israel or the Jewish people, you are hating the very heart of God, period!

If you dispute that, read those verses again! Israel IS at the center of God’s plan for the redemption of mankind and it IS where He will set up the Messianic Kingdom!

The Law is not done away with and neither is Israel. God does not break covenant nor does He change! The Law does not save you but Yeshua did not do away with the Torah. In fact He states in Matthew 5:18:

Amen, I tell you, until heaven and earth pass away, not the smallest letter or serif shall ever pass away from the Torah until all things come to pass. TLV

A serif here refers to little markings that are made in the Torah in the Hebrew and the ornate crown on some of the letters. These markings are important and they are there for various reasons and serve various purposes which is a whole other post completely! But suffice it to say that Yeshua is stating that not even the smallest marking in Torah (and Torah means “teaching” and while the Law is IN Torah, Torah does not mean Law) should be disregarded or discarded.

But again, while the Torah is not to be discarded, it cannot save you. You are saved by faith.

For I tell you that unless your righteousness exceeds that of the Pharisees and Torah scholars, you shall never enter the kingdom of heaven! TLV

As I said, God does not break covenant.

Israel IS the rootstock every Christian is grafted into so if you despise her, you despise the apple of God’s eye!

Right now, Jerusalem is the heart of the Jewish people but, according to Revelation, when Yeshua returns there will be a New Jerusalem come out of Heaven that will be where Jew and Gentile alike dwell together with their Messiah in the Messianic Era!

I will tell you this, if you are a Christian and you hate Israel, you are hating the very heart of God, period!

If you are a Christian you worship a Jewish Messiah!

The middle wall of separation has been broken down! The Bible tells us that we are Jew and Gentile ONE in Messiah! Not that you become as Jews. No! Just no! But that the Jewish Messiah and the Kingdom to come belongs to all those who believe.

“But now in Christ Jesus you who once were far away have been brought near by the blood of Christ. For he himself is our peace, who has made the two groups one and has destroyed the barrier, the dividing wall of hostility, by setting aside in his flesh the law with its commands and regulations.

His purpose was to create in himself one new humanity out of the two, thus making peace, and in one body to reconcile both of them to God through the cross, by which he put to death their hostility.” NIV

Both, reconciled to HaShem (“The Name” – God). This does not mean you become a Jew! If you are a Jew you don’t become a gentile! You are to remain, as Paul says, as you were when you were saved. You are grafted in meaning you are together into the root! There is no “conversion”.

Messiah meets you where you are and who you are!

You are part of that olive tree that is Israel because of the grace and mercy of HaShem who no longer makes distinction between the two regarding salvation, but calls all His children who call upon His name and are redeemed by the blood of His Son, Yeshua HaMashiach, Jesus the Messiah!

The Bible tells us that we are Jew and Gentile ONE in Messiah!

This post has been featured by Aimee Imbeau on Grace & Truth so be sure to visit Aimee to see her post on the topic!