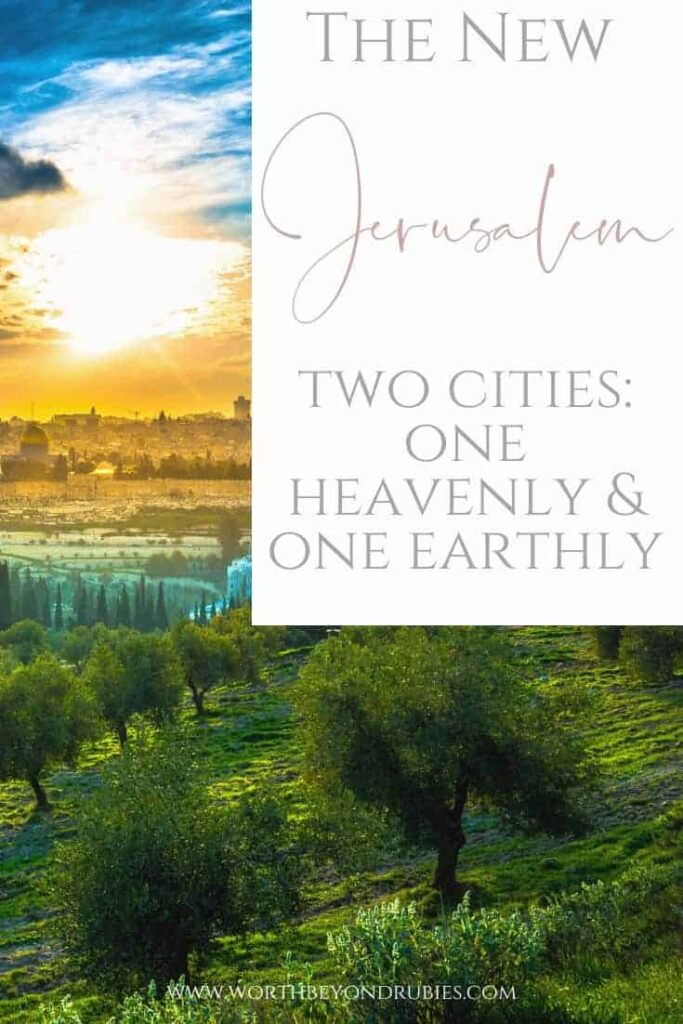 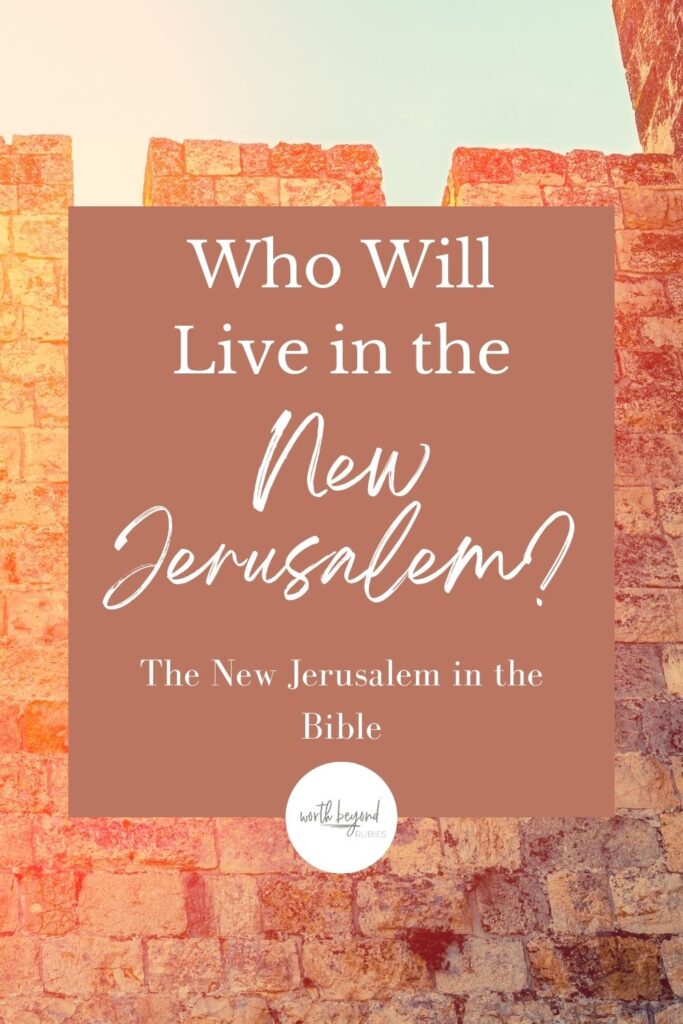 We all know that Jerusalem is the holiest of cities. It has been hotly contested for many many years and it is the epicenter of the world’s major religions. In the New Testament, in the Book of Revelation, we learn about the New Jerusalem, the city of God which comes down from Heaven. But who will live in the New Jerusalem?

Did you know that the concept of more than one Jerusalem is not just a Christian one? Read on to learn more about the two Jerusalems spoken of both in Revelation and also in traditional Judaism and who will occupy this city come down from Heaven!

In the Book of Revelation we read about the New Jerusalem coming down from Heaven.

Origin of the Name Jerusalem

The Hebrew name of the Holy city Jerusalem is Yerushalayim.

This name is believed to have come from the Word of God in Genesis 22:14 where Abraham, after God tested him by having him bring Isaac up to Mount Moriah, named that place “The Lord Provides”, which is translated to Yehovah Yireh (or what you may know as Jehovah Jireh).

It is believed prior to this, the place may have been named Shalem (Salem) where the King of Melchizedek was from.

When you combine the two names you get Yireh Shalem.

So this is one of the possibilities that I tend to subscribe to (different ideas are out there but this one makes sense to me).

The interesting thing about the word Yerushalayim is that it is a masculine plural form. Why would it have a plural form? Because even rabbinical scholars believe there is an earthly Jerusalem and a heavenly city, like the New Jerusalem mentioned in Revelation.

After the Passover Seder is complete, Jewish families utter the words “L’Shana HaBa B’Yerushalayim” or “Next year in Jerusalem!” and sing a song with the same name!

But what about those who live in Jerusalem? Well, some believe this utterance is more about the heavenly Jerusalem than the earthly! And that is a possibility!

But regardless of oral traditions or origins of thought, it remains that both Jews (at least some Jews) and Christians both believe in a heavenly city of God.

In Revelation – The Bride

So we know from the Apostle John in Revelation (and Jewish belief as well) that there is a holy Jerusalem above. The New Jerusalem, the great city, is described like a bride adorned for her husband (Revelation 21:9)

Some people wonder why Revelation 21 refers to the New Jerusalem as the Bride of Christ. Isn’t that the Church?

So what about those who claim that body of believers is not the Bride? So did Jesus betroth Himself to a city He Himself created?

Jesus cares about people so much He gave His life for them. He is betrothed to us, the assembly of believers. But the Bride, according to scripture IS the New Jerusalem because it all encompasses Israel.

An example of this is say “the Iraqi forces fell to America”. Well, did America, the physical country, pick itself up and go over to Iraq during the Iraq war and fight? Of course not! America as in the American forces, not the physical country. When the Bible says in 2 Kings 24:20:

So it is the fact that the New Jerusalem, the City of the Living God, is inhabited by Israel (including those adopted into Israel) that it is referred to as such.

I will do a study on this difference soon but for the purposes of this article, I don’t want to get into that one too deeply! That is a whole other teaching!

So that being said, let’s carry on and leave that for another day!

However, let’s use this as an opportunity to look at WHO is in the New Jerusalem!

Who Will Live in the New Jerusalem?

Let’s see what the Bible says about who will live in the New Jerusalem!

So Jesus says He goes to prepare “a place” for His Bride. This is similar to what the bridegroom says to his betrothed during the betrothal process in the ancient Jewish wedding.

The Greek word for ‘place’ here is ‘topos’ and it means:

“an inhabited place, as a city, village, district”

So He has, quite literally, gone to prepare a city for the people of God.

The Greek word for ‘mansions’ here is ‘monē’ and means:

The word in these verses in John for ‘receive’ means:

“to take to, to take with one’s self, to join to one’s self”

To join to one’s self as in a marriage.

So wait, we are back to that? Yeah…sorry.

So who will live in the New Jerusalem, this city our Messiah has gone to prepare for us?

Let’s look at some Bible verses about the New Jerusalem and see!

Jesus says He goes to prepare “a place” for us, His Bride. This is similar to what the bridegroom says to his betrothed during the betrothal process in the ancient Jewish wedding.  Click To Tweet

Bible Verses About the New Jerusalem

Oh but the New Testament isn’t the only place…

From these verses (and more that are in Scripture) we can see that those who are chosen of God, those who make up the people of Israel by birth or by grafting in, will reside in the New Jerusalem, for eternity.

But others will be there as well. There are the Old Testament saints who will also live in the New Jerusalem!

So we see there is the earthly city of God and then Paradise where those who give themselves to God will live for eternity.

Well, we know what the earthly Jerusalem has been like throughout history. But what will the New Jerusalem be like?

We know from Revelation 21:11 that it comes down from Heaven, so we know that it not a place God creates here on earth.

Earlier I referenced Jesus’ statement that He goes to prepare a “city” for us. So it will already exist and come down from Heaven.

We know its light is like a jasper stone, clear as crystal, according to Revelation 21:11.

Jasper was one of the stones set in the High Priest’s breastplate, or “chosen” when he would go into the Holy of Holies on the Day of Atonement.

The wall, the gates, the city and the streets are all made of the purest precious stones. (Rev 21:18-21)

The city needs no sun or light because God’s glory and the glory of our Messiah IS its light.

It is a city that beams with the glory of the Lord! From its walls to its streets, God is magnified!

A river runs from the Throne through the city that is clear as crystal and the Tree of Life, which bears 12 fruits is on either side.

Imagine, the Tree of Life in our midst once again! And a tree that is able to bear 12 different fruits!

There is no night there and the Throne of God and the Lamb is there and the curse is gone; the curse that cast man out of the Garden is over. Man now dwells once again with the Lord for eternity.

No curse means no pain, no sickness, no sadness. We dwell once again as God intended from creation.

God and man walk as Adam once walked.

Jesus has gone to prepare this city for us and is coming to receive us to Himself. Are you ready?

Jesus has gone to prepare this city for us and is coming to receive us to Himself. Are you ready? Click To Tweet