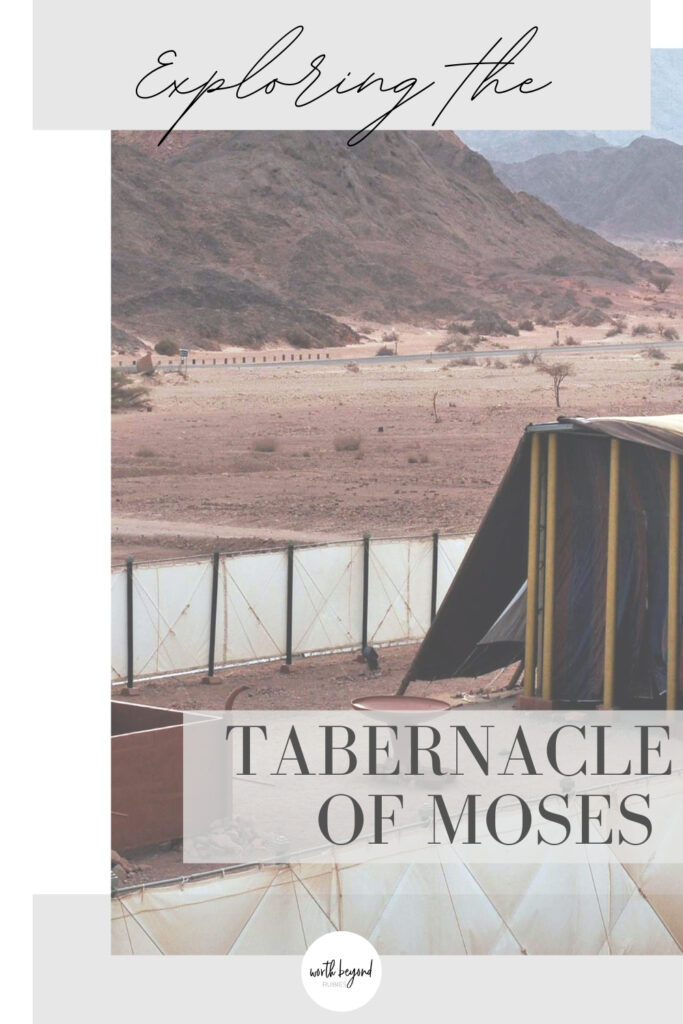 The Tabernacle of Moses is an important part of Jewish history which means it also plays an important role in the hearts of Christians. However, many people don’t know much about this temporary dwelling place of the Lord.

The Tabernacle of Moses, called the Mishkan in Hebrew, was the portable sanctuary constructed by the Israelites as a place of worship for the Jewish people after their exodus from Egypt. Also known as the Tent of Meeting, it was the very place where the kavod or glory of the Lord resided.

This post explores more about this fascinating structure and its role in both Judaism and its influence within Christianity. We’ll explore who built the Tabernacle, where the Tabernacle was located, the difference between the Tabernacle and Temple, and the sections of the Tabernacle.

Who Built the Tabernacle of Moses?

The Tabernacle of Moses was built by skilled craftsmen under the supervision of Bezalel, son of Uri and grandson of Hur.

The contribution came from all who were willing to part with their gold and silver for this purpose.

Where was the Tabernacle of Moses Located?

The Tabernacle was constructed in an area known as Mount Sinai which is believed to be on or near Sinai Peninsula. However, the exact location is unknown and the location of the mountain overall has been disputed as well. The Tabernacle was set up and then taken down as the Israelites traveled in the wilderness before settling in the Promised Land.

Once Solomon’s Temple was constructed, there was no longer a need for the Tabernacle.

The Divisions of the Tabernacle

The Tabernacle was an important part of existence for the Israelites as the presence of God resided inside, specifically within the Holy of Holies.

The Tabernacle proper was sectioned in three parts; the Outer Court (which was technically outside the Tabernacle itself hence the name “Outer Court”), the Inner Court or Holy Place and then the Holy of Holies. Each area contained articles and/or furnishings and the Priests, the descendants of Aaron, would minister within these sections with the High Priest alone ministering in the Holy of Holies.

You can read more about the High Priest’s duties in the Holy of Holies in this post on the Day of Atonement.

The altar had tools that accompanied it, such as pots, shovels (for the ashes), sprinkling basins, prongs and fire pans.

Then we enter behind the cloth veil to the Holy Place or Inner Court. You can also learn more about the Inner Court in its own article. Within this section we have three furnishings; the Lampstand, the Table of Shewbread and the Altar of Incense.

Beyond the Holy Place was the Holy of Holies (again, this section has its own article as well) and there we find the Ark of the Covenant or Ark of the Testimony.

There was a veil that separated the Holy Place from the Holy of Holies which hung from four golden pillars that were set in silver sockets (Exodus 33:32)

I won’t go into detail here about each of these furnishings and their purposes as that is covered in the articles for each section of the Tabernacle.

What is the Difference Between the Tabernacle of Moses and the Temple?

The Tabernacle and the Temple both had the same furnishings and the same basic divisions. However, there were a few differences.

The most obvious of all is that the Temple was a permanent structure and was a center of life and worship for the Jewish people whereas the Tabernacle was a wilderness sanctuary.

The second distinction is that the dimensions of The Tabernacle were clearly much smaller than those of The Temple as it had to be moved frequently.

The Tabernacle’s Significance in Relation to Christianity

I hope this brief summary of the Tabernacle of Moses was helpful and that you will visit the other articles on the site that go into each section in more detail, specifically how they can also be pictures of the life of the believer and our individual progression with the Lord in various stages of our walk with Him.

While the Tabernacle and the Temple in were part of Jewish life, they do hold meaning for you as a Christian as well since you worship a Jewish Messiah. I will be writing more about the Temple in the near future, specifically the 2nd Temple. So stay tuned for that.

If you would like to learn more about the Jewish roots of your faith and explore Torah more deeply, be sure to sign up for my weekly Torah portion emails below!