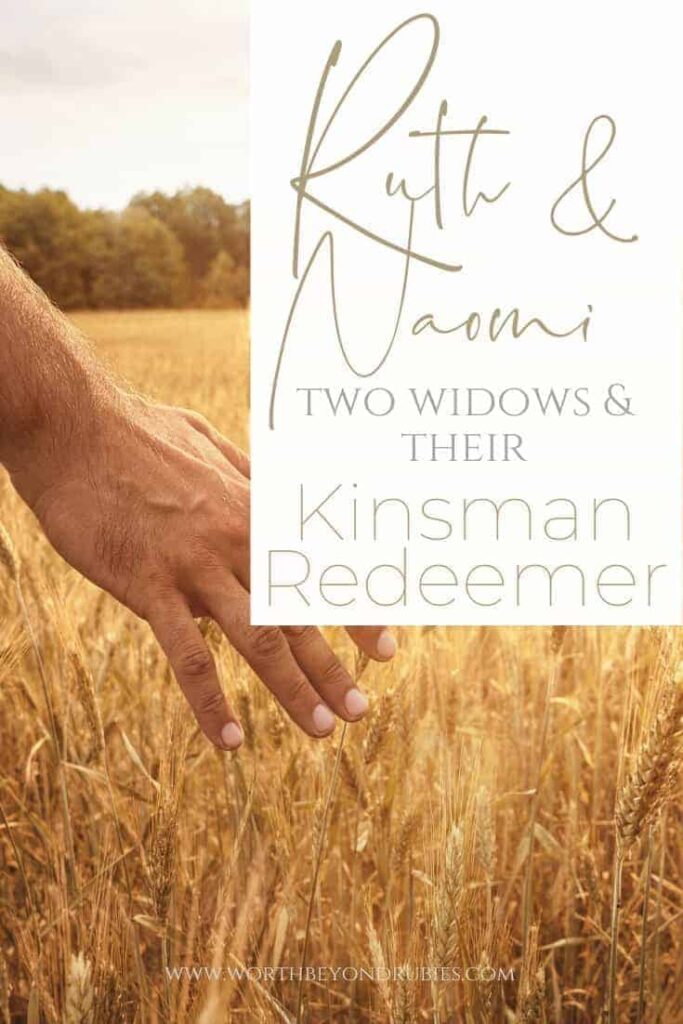 The Book of Ruth tells the story of Ruth and Naomi, Ruth’s deep love for her mother-in-law, and the love and loyalty that not only existed between them but that Ruth had for Naomi’s people.

It is a story of friendship, family, and redemption. This redemption comes in the form of a relative of Naomi named Boaz. Through him, we see the role of kinsman-redeemer played out and see what this means to us as believers.

So let’s look further into the love and friendship of Ruth and Naomi and explore this book of the Hebrew Bible, in fact the entire Bible, that is one of my favorites.

Who Are Ruth and Naomi? – The Story of Ruth

Ruth and her sister-in-law Orpah were married to two brothers, the sons of Naomi and Naomi’s husband Elimelech. They were Moabite women, and their husbands were of the Tribe of Judah who had left Bethlehem to live in Moab to escape the great famine that had overtaken the land.

The country of Moab was NOT a good place. It was definitely not a place where good, God-fearing people like Naomi, Elimelech, and Naomi’s sons would want to be. But they were there to escape this famine and felt they had few options.

After losing her husband and her two sons, “Sick and Dying,” Naomi makes the difficult decision to return to Judah because she had heard that the Lord had seen His people, looked favorably upon them, and had provided them with food. The famine had ended, and it was time to return to her own people.

But she has these two Moabitess daughters-in-law. Because Ruth and Orpah are Moabite women, she tells them (I am paraphrasing), ‘return to the homes of your families, to the land of your birth so that you can find husbands among your own people.’ Naomi’s sons are gone, and she has no other sons to offer them.

Naomi expressed some degree of guilt toward the young women, believing that the hand of God was against her. In a bitterness that is reminiscent of Job, she believes that God was somehow against her and that the young women would have a better life away from her.

After some protest, Orpah kisses her mother in law goodbye and leaves for her family’s home. But Ruth refuses to leave Naomi and return home.

Ruth tells the older woman in a line that has become famous:

Naomi relents and Ruth accompanies her mother in law back to the land of Judah.

Ruth – Embracing the God of Israel

What is significant about Ruth desiring to stay with Naomi and saying “your God will be my God” is she made this choice even after Naomi stated that she believed that God was against her. Ruth was willing to accept whatever fate the Lord would assign her.

In the ancient pagan world, one’s gods were closely related to one’s family and community. It was not like today, where you can be of a different faith than your relatives or your town and still be a part of them. It was all or nothing at that time.

So this was more than just choosing to stay with Naomi. It was a choice to stay with her God and a faith that what Naomi believed about God’s punishment was not the case. In many ways, Ruth’s faith in the Lord of Israel was greater than Naomi’s was at that point in time.

Ruth and Naomi Arrive in Bethlehem

When the women arrive in Bethlehem, the Bible tells us, in verse 19, that the people in town were excited about Naomi’s return! The women asked, “Could this be Naomi?” which meant ‘pleasant.’

But Naomi wasn’t accepting this warm welcome in her small town. In a fit of despair, Naomi rebukes her townspeople.

Naomi didn’t quite feel her name suited her and instructed them to refer to her as Marah, which means bitter:

We see the word ‘Marah’ elsewhere in scripture in the bitter waters of Marah.

The relationship between Ruth and Naomi was like mother and daughter. Ruth cared for Naomi like a daughter would and went right to work to care for her mother-in-law in this foreign land.

In Torah, in Leviticus 23:22, Hashem instructs His people:

So, as Leviticus commands in the Law, this was done in these fields. Ruth goes out into the fields of Boaz to glean some grain from the barley harvest behind the workers, and we learn this field is owned by a man named Boaz, who is a relative of Naomi’s deceased husband.

He takes a liking to Ruth because of how kind Ruth had been to Naomi and how she had stayed with her and accepted her as her family, working hard to make sure they had food in their home.

Since Boaz was a close relative to Naomi, he was a potential go’el, a Hebrew word which means ‘redeemer‘.

What is a Kinsman Redeemer?

What is a kinsman redeemer?

A kinsman redeemer is a relative who, according to Jewish law, has the right to act on behalf of a relative who was in danger or needed vindication.

We see this in the case of a relative of someone who has been killed and has the right to avenge the death of their relative. The term ‘avenger of blood’ is often used. They may also redeem property for a destitute relative or receive restitution for a relative who has died.

The year of yovel mentioned here is the Year of Jubilee, which occurs every 50 years, following 7 cycles of shmita or 7 Sabbatical years.

This was Mosaic law which again states in Leviticus (here in the ESV):

So back to our story. Naomi tells Ruth that she should be helping Ruth to secure “a resting place” for her (Ruth 3:1), so she has Ruth bathe and perfume herself, put on her best clothes, and go down to the threshing floor where Boaz will be.

She tells her to uncover his feet and lie down there and that Boaz will tell her what to do. So Ruth does what Naomi instructs, and she lies at Boaz’s feet and uncovers them.

Given that Naomi instructed Ruth to wait until Boaz had eaten and drank, it would seem to appear that she was instructing her to seduce him. But when Boaz wakes up startled wondering who she was, in Ruth 3:9, we read:

So this was not seduction in the way we think of it. This was Ruth asking Boaz to assume the role of redeemer.

Boaz accepts Ruth’s “proposal” and promises to do everything she asks of him.

Woman of valor in this verse consists of two Hebrew words: isha, which means woman, and chayil, which means valor. If you have not already, watch the video on chayil that is in this post, and you will find that this is often translated as “virtuous”, but chayil is strength like an army. He was calling her a woman of strength and force, of power and bravery.

But there was one complication.

There was actually a male relative of Naomi who was more closely related to Naomi and Ruth. Boaz indicates that if the relative is willing to be the redeemer, so be it. If not, Boaz would step in and be that redeemer for them.

We see in the Book of Ruth that the relative chooses not to be the redeemer since it would mean marrying Ruth, and he was not willing to put his own inheritance at risk, so Boaz becomes Kinsman Redeemer and marries Ruth, redeeming Naomi’s land as well.

The relationship between Ruth and Naomi led to the redeeming relationship of Boaz and Ruth. Ruth’s story ultimately led to our own Redeemer.

Jesus redeemed us from the punishment of sin, which is death, and came to the aid of His people and the nations who were lost. His atoning death upon the cross paid the price that was ours to pay.

Jesus redeemed us from the punishment of sin, which is death. His atoning death upon the cross paid the price that was ours to pay. Click To Tweet

Boaz redeemed Naomi’s lineage by giving her a descendant, Obed, who was now Naomi’s own son. She became a foster mother to him, and he would care for her in her older years, as was the duty of a son.

Boaz and Ruth gave her the son she lost but they gave her much more than that.

They gave her life. They gave her hope and joy. They restored it all to her. The Ruth and Noami relationship was one of love, loyalty, and ultimately redemption for all mankind.

Ruth did not have to stay with Naomi. She could have returned to her own family and the gods she knew throughout her youth. But these two widows continued together and cared for each other until God gave Naomi what was lost.

Ruth chose her family. She chose to remain with the woman her husband could no longer care for. And God provided!

And Yeshua our redeemer provided that redemption for us.

Ruth and Naomi’s relationship resulted in change for the world.

Because of Ruth’s faithfulness to her mother-in-law, Ruth and Naomi gave something to all of us; they gave us the Messiah of the world. The story of Naomi is one of redemption; Ruth’s simple act of love and kindness not only provided redemption for Naomi but us all.

Ruth chose to reject the gods of her family and accept the God of Israel.

When we reject the gods of this world and choose to follow Yeshua, we too are redeemed.

The Ruth and Naomi relationship resulted not only in the family of our Messiah, but they also are the very picture of choosing; choosing family, choosing God, choosing redemption over the things this world offers.

Before you go, get your FREE 7 Day Devotional, The 7 Sayings of Yeshua From the Cross, below as my gift to you!