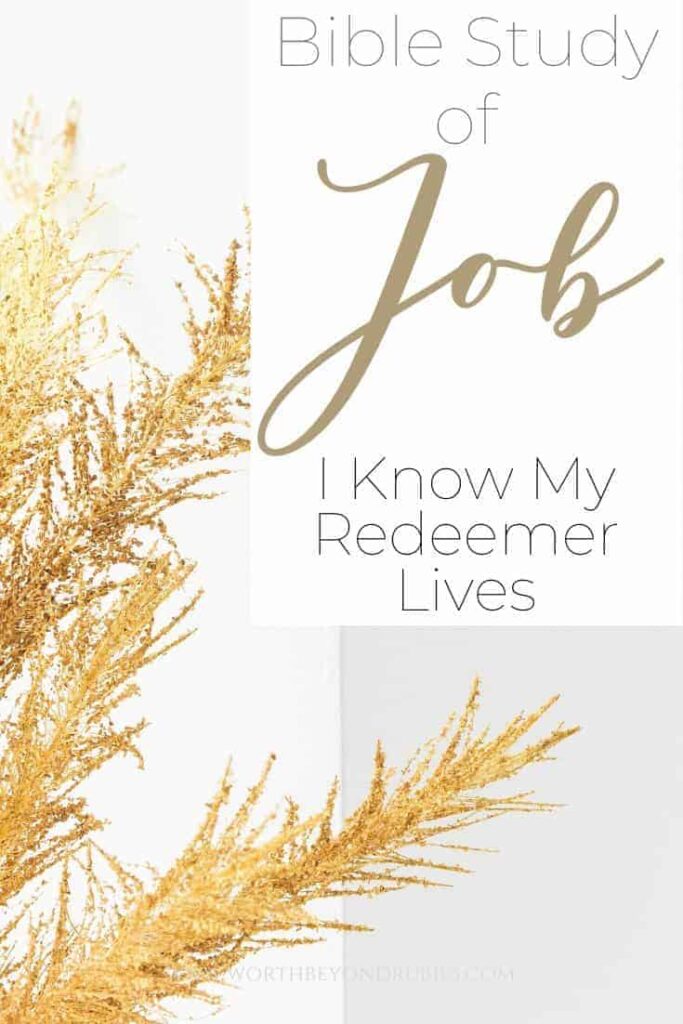 Having unshakable faith during times of trouble can be difficult for us as believers, no matter how mature in Christ we may be. In this Job Bible study we will look at the faith of Job in the darkest of trials and find examples and declarations of faith for all of us to emulate.

Praising God and His majesty and glory when we are suffering is extreme worship and a true sacrifice of praise because we are moving past our feelings to our faith. So let’s dig in to the Book of Job and learn about his unshakable faith in his Redeemer!

In Job 19:25, when Job was going through the worst of times and suffering says “Yet I know that my Redeemer lives, and in the end, He will stand on earth.” (TLV)

Job, covered in sores, berated by his friends, who lost all his children and everything he owned, whose wife said ‘Are you still holding firmly to your integrity? Curse God and die!’ (Job 2:9), said he knew His savior lives.

Who was Job speaking of and do we also believe this to be true in our times of trouble?

In our Job Bible study, we will see that Job was a righteous man who loved God. He was also quite blessed. He had everything a person could want; a loving family, beautiful children, land, wealth and a loving wife.

The Bible tells us in Job 1:6 that Satan came with the sons of God, the angels, to present themselves before Him. God asked Satan where he comes from and Satan tells Him in Job 1:7:

Then God goes on to ask Satan in verse 8:

“Have you considered my servant Job, that there is none like him on the earth, a blameless and upright man, who fears God and turns away from evil?” ESV

Satan then tells God essentially that it is no surprise that Job honors God and lives a godly and blameless life because there is a hedge around him and he is blessed. But Satan goes on to tell God that if God were to take everything from Job surely he would curse him.

So in what is sort of a “Trading Places” type “bet”, God agrees to let Satan have at Job with the exception that he cannot touch his life.

Satan then proceeds to strip Job of everything he has and everyone he loves, except his wife and apparently his friends.

He loses his children, his livestock, his health and his wealth.

His friends berate him and tell him he must have sinned in some way and done some terrible things for God to punish him this way. Nice friends huh?

Job argues his case not only with his friends but with God! He wants to know what charge there is against him to cause all this to happen, BUT he NEVER curses God.

He never speaks against God in any way! Job’s faith in God’s majesty stayed strong.

“In all this Job did not sin or charge God with wrong.” ESV

Job then goes on with this back and forth dialog with his “friends” and makes his case that he did not sin against God and did not bring this calamity on himself in any way. He is (I believe rightfully) thoroughly insulted that these friends of his, who surely know him well, would believe such ill about him.

Job Asks for An Explanation

Our Bible study on Job would be far from complete if we didn’t take a long, hard look at Job’s utter confusion. While he had faith in God, Job cries out for an explanation from God! He wants to know why this is happening to him and wants God to defend Himself because, in his eyes, he has been without fault!

God appears to Job in a storm cloud and shows Job that God is so much greater than we could imagine and we cannot begin to know the depths of His wisdom and knowledge. He also shows Job that He is aware of the most minute details of the universe and that what is happening to Job does not escape His attention.

In essence, He shows Job that he is in no place to know the order of things and why things may happen as they do.

It’s a humbling moment for Job to realize he is a mere speck in the greater order of creation and that God’s ways are not his.

In other words, God shows Job that yes, the world DOES revolve…just not around him and that there is a greater plan happening.

Faith of Job – My Redeemer Lives

Yet even though Job went through it all, Job at one point saw to his redemption. He saw His Messiah! Job saw Jesus LONG before Jesus existed on earth.

Job’s faith came from a place where he knew that there was something beyond this life. He knew that there would come a day that his Savior would stand on this earth and defeat the same evil that sought to destroy him.

Yes, Job may have asked God to defend Himself but once again, he never cursed God.

“I know that my redeemer lives, and that in the end he will stand on the earth.” NIV

Job’s faith allowed him to see past his current troubles (even though not consistently) to his ultimate redemption and if it didn’t happen in his lifetime he knew it would happen nonetheless.

Job saw past his current troubles to his ultimate redemption and if it didn’t happen in his lifetime he knew it would happen nonetheless.

He saw Jesus! Job saw the time Jesus would stand on this earth as his redeemer! He knew Jesus would take His place as the Lamb of God who takes away the sin of the world and at the end, as the Lion of the Tribe of Judah.

Do we have that same faith when we go through times of tribulation or attack?

An Expository Study of Job: “Redeemer”

Redeemer as used in this verse is the Hebrew word ‘ga’al’ and it means:

‘to redeem, act as a kinsman-redeemer, ransom, do the part of a kinsman’

The law of the kinsman redeemer stated that if a man died and left a wife without having had a child, the brother (or nearest relative) of that man was to take the woman as his wife and give her children on behalf of the brother.

It was also a relative who avenged a person. If a person was killed, the kinsman redeemer would see to it the death was avenged.

If a person fell into debt and lost what they owned or was sold into slavery, a kinsman redeemer could purchase them from slavery.

They were to restore what their relative lost, whether it be their life, their property or their freedom.

Jesus is our Kinsman Redeemer. He is our Brother as He is the Son of God and God is our Father.

We were lost and slaves to sin and He purchased our freedom with His blood! He paid the price that was ours to pay.

Job’s faith was in his heartfelt knowledge that his redeemer lives! He knew no matter what he lost in this world, there would be One who would redeem him!

An Expository Bible Study of the Faith of Job: “In the End He Will Stand On the Earth”

Job looked past his present troubles to the promise of more! He didn’t sin against God no matter what he lost because he believed in the promise! This Bible Study on Job’s faith shows, if nothing else, that when you put your faith in your Messiah, you can withstand all of life’s storms!

Job knew Jesus would take His place on this earth!

The Hebrew translates to “He will take His stand”.

In the Hebrew, His stand is ‘quwm’ and it means:

Here it is the actual soil of the earth.

It was not metaphorical. Jesus would rise up and stand on the actual dust of the earth! In other words, His physical presence would be here and He would redeem mankind!

When you have that kind of promise, the troubles of this life will pale in comparison and I believe Job didn’t sin against God through all his trials because he believed his Messiah offered far more than this world ever could.

Have you struggled with giving praise in your trials? Do you experience difficulty worshipping in the storm? Remember to stare difficulty in the face and say “I know my redeemer lives!”

Share in the comments how you experience praise in times of trouble! Does this Job Bible study on faith encourage you to read the Book of Job?