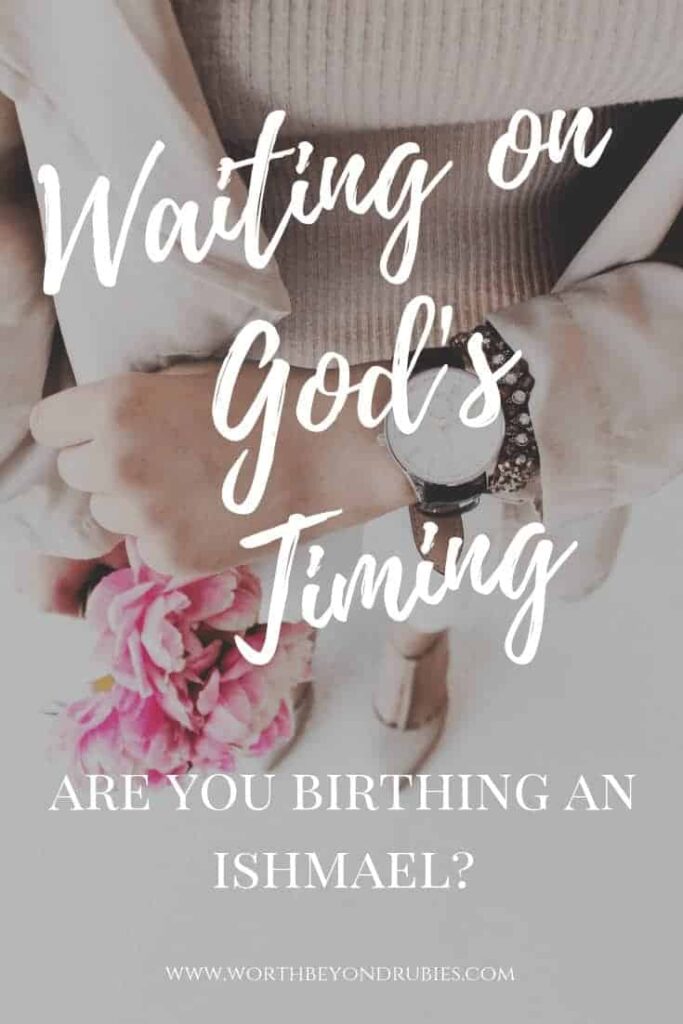 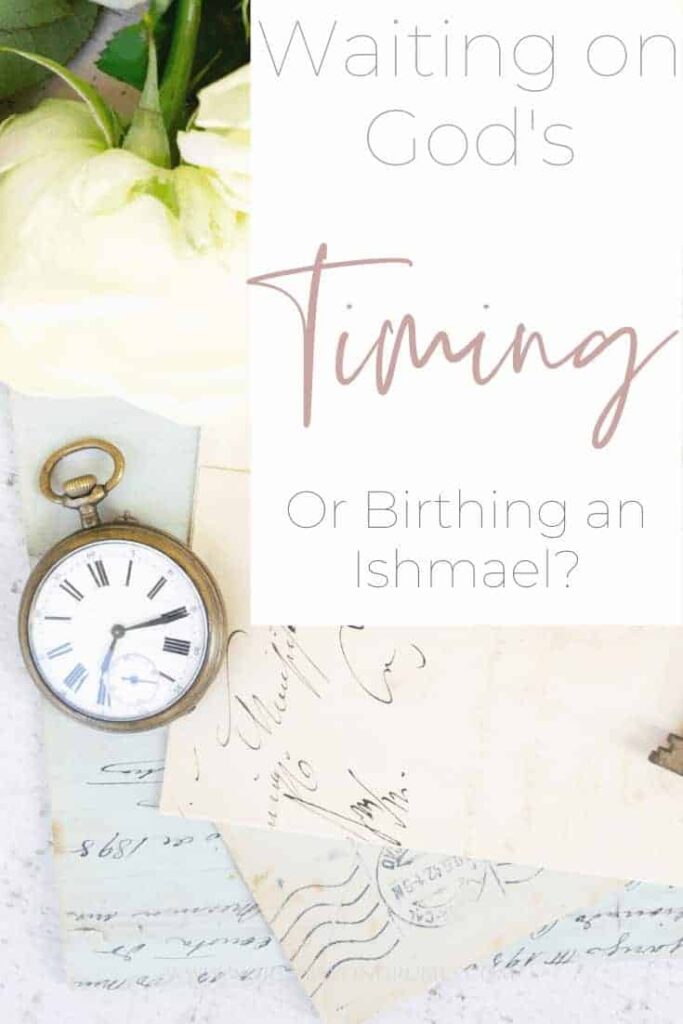 Waiting on God’s timing, especially when we are experiencing difficult times, is not often an easy thing to do. It can be very tempting to take matters into our own hands, not always as a blatant act of disobedience, but sometimes out of fear. We wonder if God hears us and so we act!

We may not question whether or not God CAN do something in our lives but we may doubt if He WILL do it. Sarai wondered that very thing when she was waiting for a child. Like her are you birthing an Ishmael? Read on to learn how to avoid taking matters into your own hands and trust God’s timing!

Sarai had been wanting a child for a long time! She yearned to give her husband Abram a son. But it appeared to her, in her old age, that it was just not to be.

In her desperation, in this intense desire to give Abram this child of promise, she gives her Egyptian servant Hagar to Abram to act as a surrogate of sorts, so that she may have a child through her.

Now, one important thing about this situation that Sarai put herself in is that she was fully aware that God had entered into covenant with Abram in Genesis 15: 5-6:

She doubted His willingness.

But, she was his wife! Nowhere had God commanded Abram to take another! And yet instead of waiting on God’s timing, she took matters into her own hands.

She put her own desire ahead of God’s plan.

Abram, in his own act of disobedience reminiscent of Adam, did not reject his wife’s plea. He willingly listened to his wife and went in to Hagar and, by him, she conceived a son, Ishmael.

The Bible tells us, in Romans 9:6-8, that Ishmael, while loved by God and given the promise of being a great nation, was not THE son of promise but the child of the flesh; the child conceived through Sarai’s distrust.

Waiting on God’s Timing – Patience is Not My Virtue

We have all heard the saying, “patience is a virtue” but it is not my virtue.

I have a difficult struggle with patience (as anyone who is around me at Christmas time can attest to) and waiting on God’s timing has never been my strong suit, although it is a spiritual discipline I am working on.

I can relate to Sarai (then re-named Sarah by God).

Sometimes when things happen (or don’t happen) that threaten to derail MY plans, I feel like I have to step in and take action.

Now, while I am absolutely certain that I am wise enough to know not to EVER make an offer to my husband like Sarai made to Abram (then re-named Abraham by God), I can most definitely understand where my dear ancestor was coming from.

She wanted a child more than anything and in her limited vision it wasn’t happening.

The promises of God were there, but, let’s be honest, she felt she had more power to make it happen than God did.

Waiting on God’s Timing – Lack of Trust in God

At the end of the day, it all boiled down to Sarah’s lack of trust. To her, waiting on God’s timing came with a fear that time was getting away from her and her ability to play a role in giving Abraham these descendants God spoke of was fading.

She may have believed that God would make Abraham’s descendants as numerous as the sand in the seas but she did not believe enough to think He could do it without her own intervention.

I am guilty of this at times.

Sarah likely didn’t doubt God’s promise. She just doubted it would happen through her.

We are all guilty of putting God in the boxes of our own design. We have a mental picture of how we think God should work and, when that doesn’t happen, we are tempted to jump in rather than waiting on God’s timing and trusting that it is perfect timing.

In doing so, we are birthing an Ishmael in our own lives and then asking God to bless it!

My Rabbi said “As long as you carry the umbrella God gave you, you’re not going to get wet!”

Well, Sarai (and I) dropped that umbrella and oh boy, did she ever get drenched by the downpour around her.

But God is not a covenant breaker! He will work things out according to His perfect plan.

When we take matters into our own hands, we are bringing about a situation or a relationship that yes, God CAN bless and redeem in spite of our disbelief and disobedience, but it is not His perfect plan for us.

When we don't wait on God's timing we are birthing our own plan and then asking God to bless it! Click To Tweet

Sarah was leaning on her own understanding. She saw things from HER perspective, instead of trusting in God’s plan.

In doing so, she ended up despising the very thing she brought upon herself.

Our own efforts are never as good for us as God’s provision will be.

But in the end, God did as He promised. He brought about a great nation and used Sarah in her old age to do so.

Have you ever taken matters into your own hands instead of waiting on God’s timing when things didn’t move as quickly as you liked? Share in the comments how God redeemed that for you!