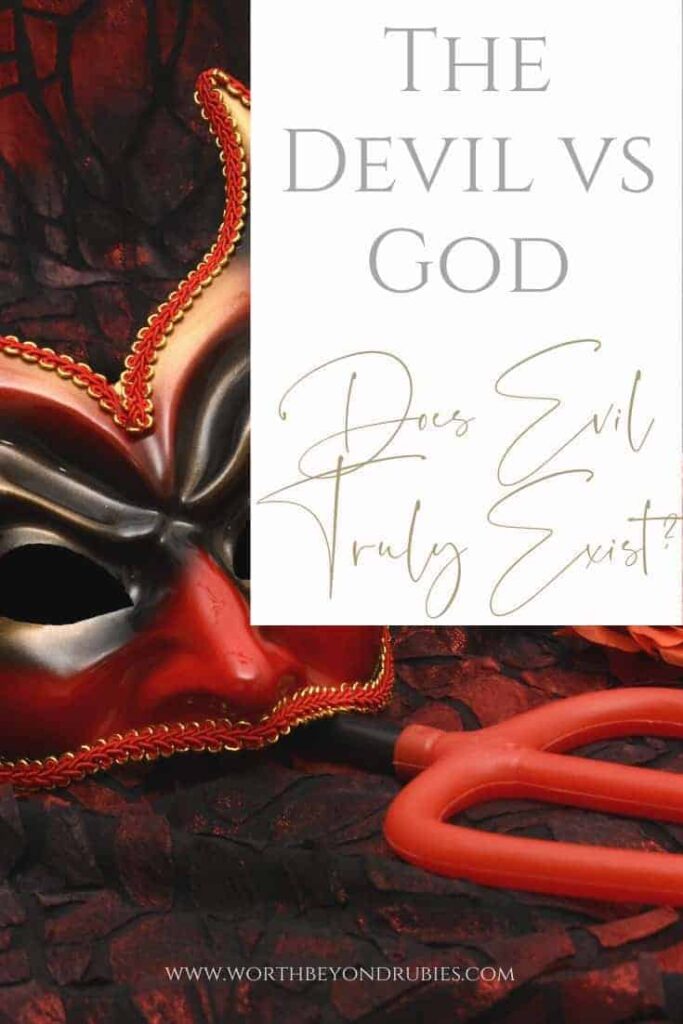 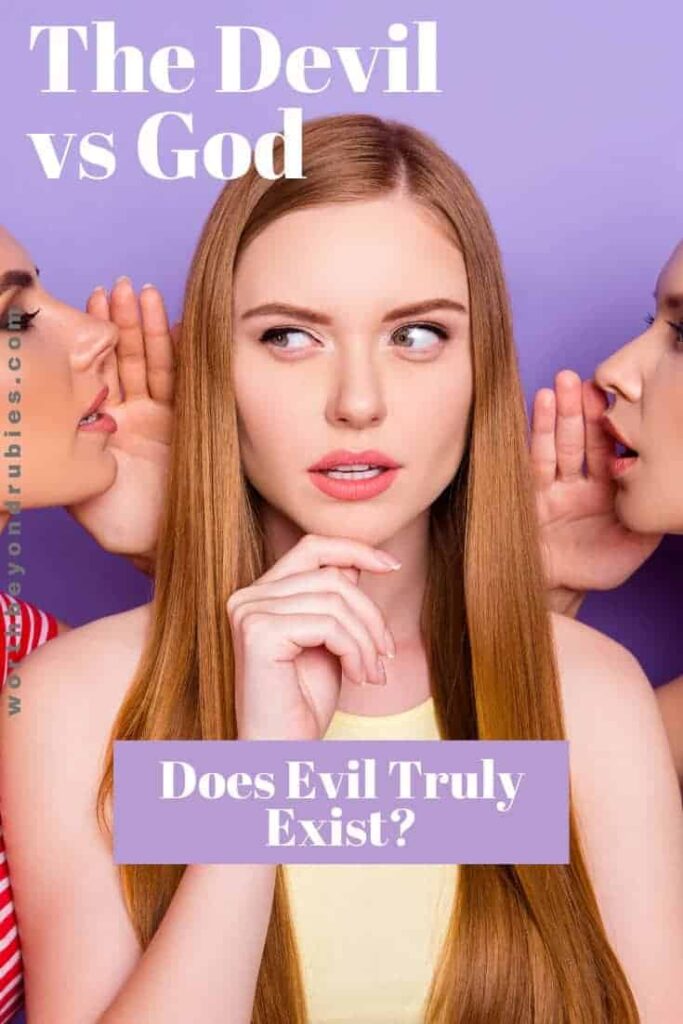 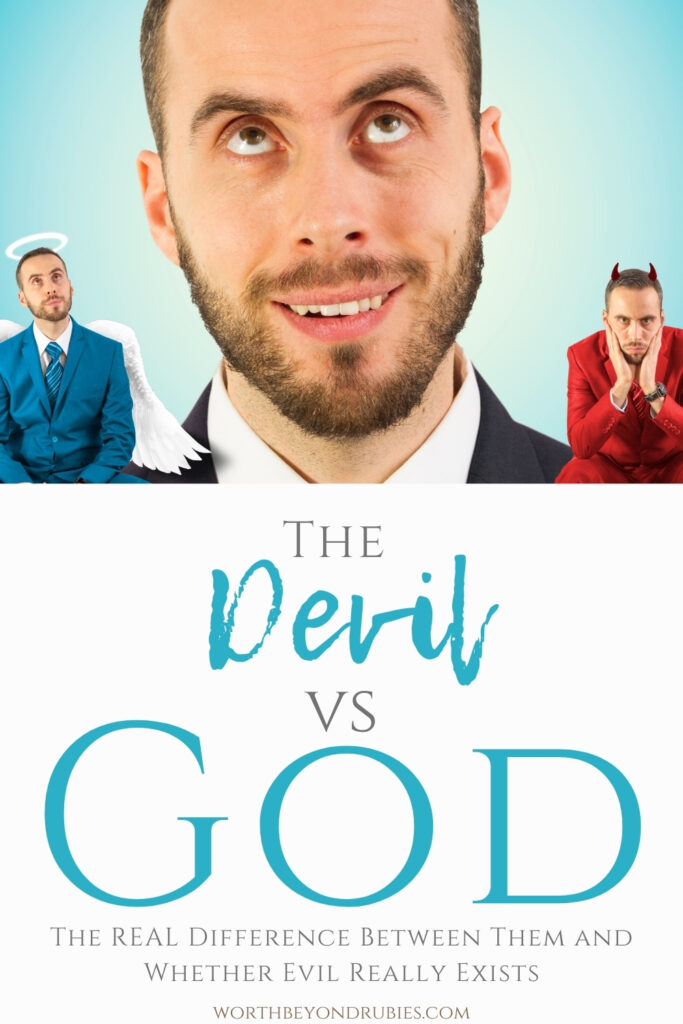 Does evil exist? The lies of the devil run deep, even to the core of what we believe about his own nature and power. We look at this Devil vs God scenario as though one were as powerful as the other. Is the Devil as powerful as God and, essentially the god of evil? What is ‘evil’ and how much power does the enemy really have?

The Devil vs God – How Much Power Does Satan Have?

When you ask people, especially people who are not Christian, what they think of the devil, they will often ascribe to him some form of a position of authority. They almost envision him as some sort of polar opposite of God, a powerful ruler not to be challenged. But, in doing so, they assign to him authority he doesn’t have. FAR more authority than he warrants!

You see, Satan is not the opposite of God. There are not two; one evil and one good. He is not a supreme being. There is not this devil vs God scenario going on where they are two equal powers competing for people’s souls.

There is one God alone.

Satan is, in fact, a created being. He is as limited in power as any angel would be. He is in fact a fallen angel, although he was once in a high position of authority before his fall, he was still just a created being.

He is not all powerful. He cannot create. He cannot read your mind. He is not omnipotent, omniscient, omnipresent.

He is simply a liar, and a good one at that because it is his lies that convince people he has far more power than he actually does.

You see the concept of evil is actually a faulty one.

Does Evil Exist? – Well, What Is Evil Exactly?

I found the following from a story about Einstein debating with his college professor. The story is not exactly true, but the point it illustrates is valid nonetheless.

So what is evil? Well, the reality is there is no such thing as evil in and of itself. Evil is a word created to describe our state of godlessness. It is simply the absence of God, the absence of holiness, the absence of the light of God. Evil has a limit.

The Devil vs God – The Devil Is a Liar

You see, the goodness of God knows no bounds. But evil, the absence of God, has a limit. You can never fully remove God from the world. But there is no limit to how much of God one can experience. He is limitless! He is eternity!

You cannot add more evil to the world, you can only continue to remove God further.

Where heat exists, cold cannot. Where light exists, darkness cannot. And where holiness exists, evil cannot. Evil is not the opposite of holiness, it is the absence of it. The devil is a liar!

Where heat exists, cold cannot. Where light exists, darkness cannot. And where holiness exists, evil cannot. Evil is not the opposite of holiness, it is the absence of it. The devil is a liar! Click To Tweet

Satan’s greatest lie, his greatest deception, is convincing people that evil actually exists on its own, apart from the existence of God. He wants us to believe that the power he has is, in fact, the opposite of holiness.

By doing this, he assigns himself power. He promotes himself, at least in the minds of people, to a level of being the god of evil in a sense, even sometimes wanting us to get the impression that he has superior powers. After all, he sometimes makes us think he can undo the good purposes and plans God has for us.

It’s a lie! And he, as the Word of God says, is the father of lies. He wants to project this representation of a deity but he is not.

His only power is in what he can convince humanity he has and in the level that we willingly accept his lies into our hearts and minds. He has no weapon except what he places in the minds of men, taking advantage of our weaknesses and our free will. His only weapon is a lie. Everything he does and everything he uses against us is a lie.

But he does it with lies!

The Lies of the Devil That Tempt You

It’s all lies. It’s all he knows. And it is how he destroys!

From the Garden of Eden to today, he deals not in power, not in might, not in authority, but in lies.

The Concept of Evil

Evil is a concept born out of his lie. Our belief in evil as a power on its own in this devil vs God scenario ascribes him his authority. Evil is merely God-lessness!

Does evil exist? Evil is simply what remains when we remove the attributes of God from our lives, our families, our communities, our nation, our world.

Evil is simply what remains when we remove the attributes of God from our lives, our families, our communities, our nation, our world. Click To Tweet

He gets his ‘power’ by convincing us that God either doesn’t exist or that God may exist but doesn’t really care, doesn’t have any more power than he does, or that God is just some cosmic killjoy that loves watching us go through life struggling while demanding we don’t enjoy ourselves. These serve to turn us from God and remove the presence of God in our life.

Everything he tempts us with, power, greed, lust, etc., is all a lie to make us believe that what we have isn’t enough! That more is better, that better is best! Keeping up with the Joneses turns into a fight to beat the Joneses!

And we worship the things of this world rather than the creator of it!

It was this way from the beginning. He lied to Eve by telling her eating the fruit would make her like God and that God was just trying to keep her from having the knowledge and power He had!

He lied to Cain when he caused him to murder out of jealousy. He caused David to pursue Bathsheba out of lust and then ultimately murder to cover his guilt. He caused Judas to betray his Messiah out of greed.

When the Word tells us to resist the devil and he will flee, it first says “Submit to God”. That has to come first. Where light is present, darkness is not. When you submit yourself to God, you flood your life with His light, chasing away darkness! The enemy WILL flee from it!

Resist the lies, resist the temptations, resist his attempt at making you believe he has power over you.

Devil vs God – Don’t Be Fooled, Only One is in Control

God is in control! God is the ONLY power and authority! He is ruler of the universe and all creation.

Don’t be fooled into thinking the devil either has equal power OR into believing he has no power at all.

You see, while his only power may be in lies and temptation, he accomplishes this by either glorifying or minimizing his importance.

Aside from making us believe he has more authority than he does, he also causes us to not pay any attention to him at all by making us believe the devil is just cartoon character with a pitchfork or a character sitting on your shoulder in some ‘back and forth’ with an angel.

When we believe either of these lies, we ignore the threat he DOES pose and he creeps in with lies and temptations.

In the battle of devil vs God, there is only ONE victor. In fact, there really IS no battle between the two. The only battle going on is in our minds where the enemy plants his seeds. Those seeds sprout and grow into deceptions and strongholds and generational curses!

They begin to take over our homes, our lives, our communities, our nations. All from lies.

The Bible tells us in Isaiah 54:17 quoted above that no weapon forged against you will prevail. Make no mistake, there ARE weapons forged against you. But because they are all based on untruths they will lose in the end, as will his time tormenting believers! We have eternal life and he does not!

How Great is Our God?

At the end of the day, what matters most is not the power or lack thereof of the great liar! What matters is the power and authority and greatness of our God and the Lord Jesus Christ!

Our God is the Name above all names. He is the Alpha and Omega! By him and THROUGH Him ALL things were made, even the fallen angels.

God is great! Gadol Elohai – How great is our God!

In what ways has the enemy used lies in your life to convince you he has power and authority over you? Has he ever convinced you this was a devil vs God scenario and that he had more power than he does?