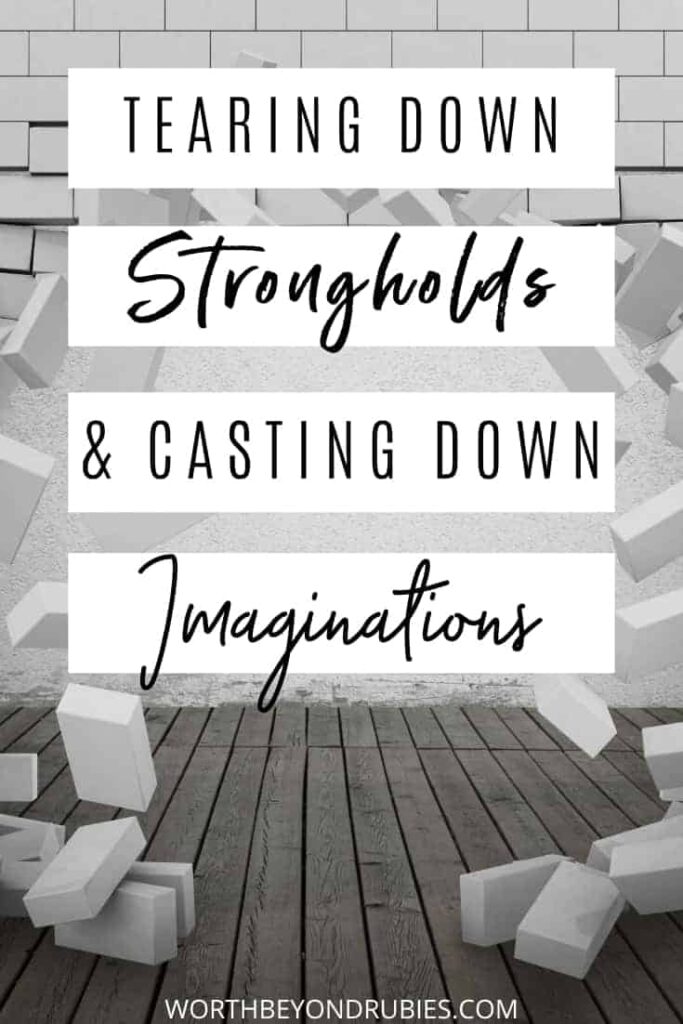 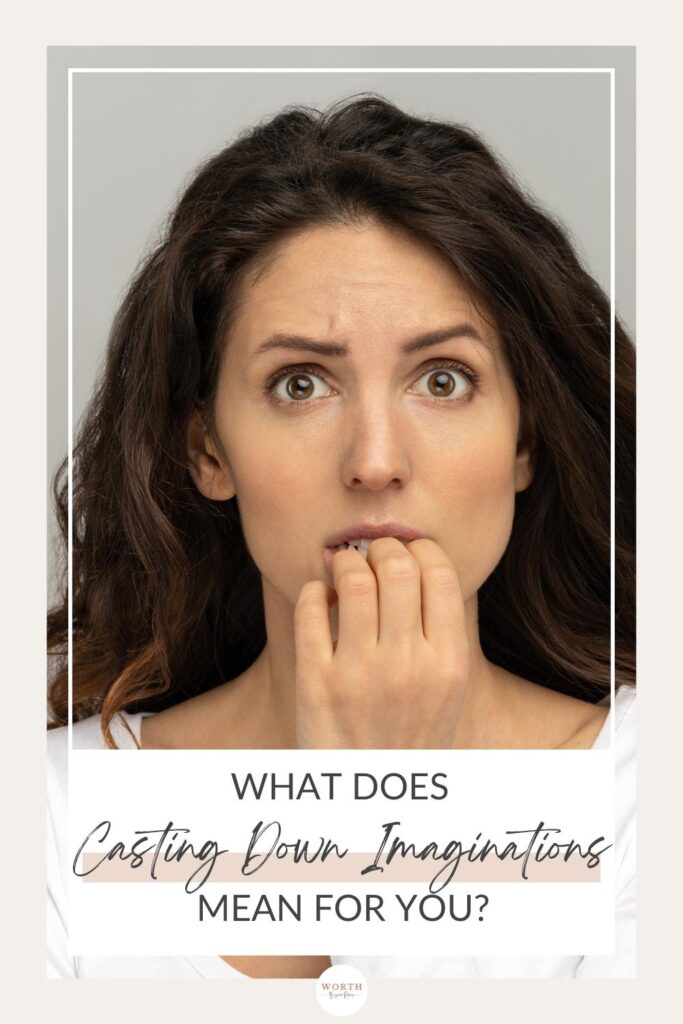 We all know that the Bible tells us we are to be casting down imaginations and tearing down strongholds, but what does that actually mean for us?

It’s one thing to know what the Bible says, but it’s another thing to put it into practice in our daily lives. Many times we don’t even understand what these verses truly mean, let alone how to apply them.

In this article, I want to take a closer look at what casting down imaginations and tearing down strongholds means for the believer this year and in the years following so that we can live without being under bondage to the enemy and his lies. I’ll also share some practical tips on how you can put this into practice in your own life.

So read on to learn more!

What Does Casting Down Imaginations Mean?

Those of us with anxiety have a brain that is like an author of fiction. It wakes up in the morning and writes its own novel with situations and scenarios, plots, and plot twists for the reader (us) to become engrossed in.

It imagines things that have no basis in reality. I know this because this has been part of my life for some time. How can we turn our attention toward God and His Word instead of the lies our own mind tells us, especially in times like we are experiencing now? Read on and learn how to start tearing down strongholds in your life!

I was not always a victim of anxiety, which I recognized at least. It began or emerged later in my life. It worsened over time due to what I believe to be PTSD.

My brain is oh so creative in its imaginings and I had virtually no knowledge of, or experience with, tearing down strongholds or casting down imaginations. When this all began I was a new believer. That was a foreign concept to me!

So my brain went unchecked for a long time; entering a state of panic in an instant by hearing a noise that it instantly convinces me is something dreadful.

If a car I didn’t recognize pulled into my driveway, it must be something devious or I must be in trouble (even though I have never had so much as a parking ticket in my life).

This kind of worry (imaginations) is a tool of the devil , a stronghold, that he binds us in and uses to get us to step away from faith and trust, into a spiral of fear and worry with no basis in reality as we feed the scenario by getting into agreement with it, always allowing it to take root.

This is a tool the enemy uses to get us to step away from faith and trust and into a spiral of fear and worry as we feed the scenario by getting into agreement with it. Click To Tweet

So what does casting down imaginations mean?

It means taking those thoughts, those worries, those whisperings that the enemy plants in our minds that can grow and take root if we allow them to, every high thing, every proud thing, every lofty thing, every diminishing lie, and we “demolish” them, much like “casting down” a plate to the floor and smashing it into bits.

We take those imaginings, those first rumblings of “you can’t do that” or “you’re not good enough” or “this is going to be bad news” and you send it to the ground with the Word of God that replaces it with His truth!

We demolish it and then take those rebellious thoughts that the enemy tried to plant inside of us captive to the obedience of Christ.

Those little “arguments” that creep in, that corrupted thought that the enemy plants? Those are the enemy working in us to tell us that God can’t possibly have it under control or worse, that He is setting us up for a huge fall. He is busy writing that work of fiction for our minds to read.

Tearing down strongholds and casting down imaginations and taking every thought captive takes that novel off the best sellers list and into the trash heap where it belongs!

Casting Down Imaginations & Tearing Down Strongholds

So we have mentioned tearing down strongholds but what is a stronghold?

Lexico.com defines a stronghold as “place that has been fortified so as to protect it against attack.” “a place where a particular cause or belief is strongly defended or upheld”.

I feel like these two definitions combined make up a fairly reasonable definition of a stronghold as we are using it with regard to faith.

A spiritual stronghold is a habitual process built into your thought life. It is believing and repeating the same old tapes people have played to you that you now embrace as your own.

Now, these processes can be for good, such as when we memorize scripture and develop godly habits!

Or it can be the opposite and allow ourselves to absorb the words or thoughts the enemy keeps repeating to us.

It is when the enemy can make you take a thought, a lie, and make you digest it and absorb it so much that it becomes who you see yourself as.

How to Cast Down Imaginations

Prayer and studying the Word, having God’s Word seep into every fiber of your being and redefine for you who you are, is the best way to tear down strongholds! These are at the core of spiritual warfare.

When the enemy comes at you and tries to plant those lies in you that grow into strongholds, shake it off!

Shake off the tendency to believe what he tells you about you!! Be like Paul and shake it off!! Shake off the vain reasonings and the evil reasonings, the attempts at focusing on either lack or what you have gained in your OWN power. Shake off the anxious thoughts and put them under the obedience of the Holy Spirit and the authority of Christ.

Do not let the devil’s twisted, corrupted imagination plant negative thoughts in your mind and take them captive in the Name of Jesus and praise God for the spiritual victory that is already yours! It has already been won.

I know it sounds flippant as though you can just rid yourself of it like snapping your fingers, but read more about the way Paul did this below! You will learn what ‘shake it off’ truly means.

It begins with the true realization that it is not our battle to fight. When we say “It’s just not that simple” it is usually because we are trying to fight the battle ourselves.

To Learn More, Read more about Paul and the viper in this post!

Let’s look at what the Word says about tearing down strongholds and how to cast down imaginations!

For though we walk in the flesh, we are not waging war according to the flesh. For the weapons of our warfare are not of the flesh but have divine power to destroy strongholds. We destroy arguments and every lofty opinion raised against the knowledge of God, and take every thought captive to obey Christ (ESV)

For the weapons of our warfare are not of the flesh but have divine power to destroy strongholds. (ESV)

And you will know the truth, and the truth will set you free. (ESV)

Do not be conformed to this world, but be transformed by the renewal of your mind, that by testing you may discern what is the will of God, what is good and acceptable and perfect. (ESV)

No temptation has overtaken you except what is common to mankind. And God is faithful; he will not let you be tempted beyond what you can bear. But when you are tempted, he will also provide a way out so that you can endure it. (NIV)

He will bring down your high fortified walls and lay them low; he will bring them down to the ground, to the very dust. (NIV)

The Lord is good, a refuge in times of trouble.He cares for those who trust in him (NIV)

Tearing Down Strongholds Knowing He is a Liar

The enemy likes to make me feel I have to take action on my own to fix this situation that hasn’t even happened! He is a liar and the father of lies.

So then, as a result, we don’t turn a situation over to God as we should and so we feel we have to control it ourselves.

When something happens that takes that control away from us (another person or situation is a trigger for something to happen) we start to formulate scenarios in our minds.

Worrying about something that is of our own imagining is trusting in your own mind and what it concocts, rather than having the wisdom of trusting in God.

Casting down imaginations and, thereby taking every thought captive, involves getting in line with what God and His Word says about us or our situation versus believing the lies the enemy wants you to believe.

I cannot stress enough the importance of seeking God in prayer! You do not have to struggle through these false worries alone. God is there to take your cares from you and give you peace!

Worry is trusting in your own mind and what it concocts, rather than having the wisdom of trusting in God.

If we just glance away from that “novel” long enough to look at God’s book, taking captive every thought that has no place in our lives, we could escape the trappings of our mind and the enemy who seeks to control it.

Let God be the author of your story, tearing down strongholds and destroying imaginations and filling you with a faith that allows you to rest in the knowledge that no matter what happens, God has you!

If you would like to learn more about how you can start tearing down strongholds and take every thought captive, I recommend this amazing course by my friend Sunshyne Gray, a Licensed Christian Therapist and Certified Biblical Counselor!

Let God be the author of your story, casting down imaginations and filling you with a faith that allows you to rest in the knowledge that no matter what happens, God has you!