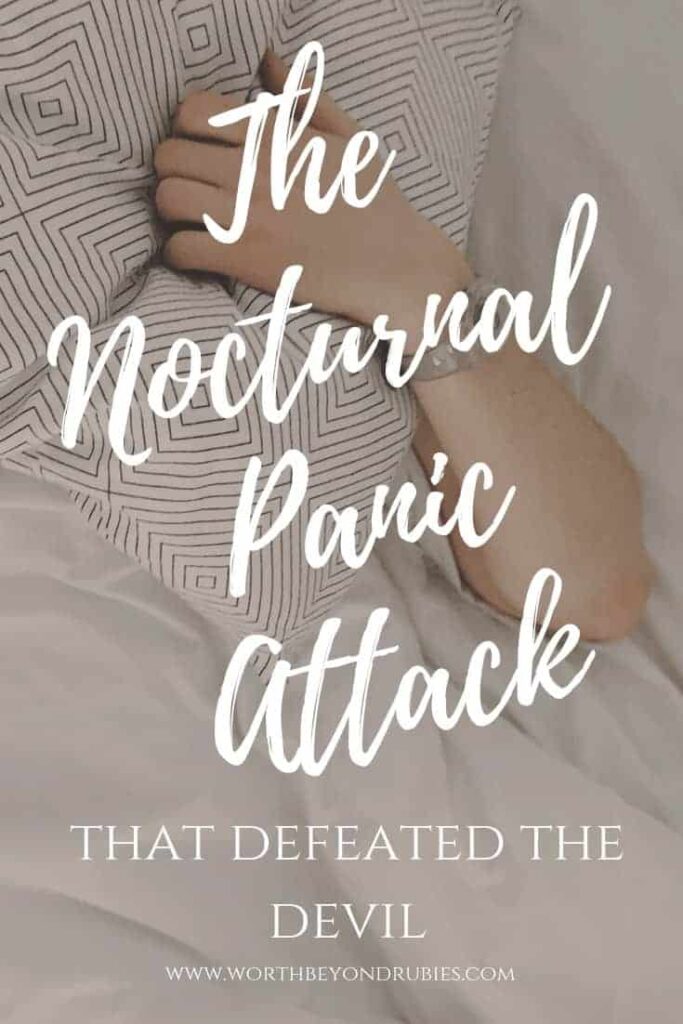 It was 3am and I woke up with my heart pounding.  A feeling that I can only describe as terror flooded over me. But I wasn’t fearing anything. I wasn’t under stress. I wasn’t going through any problems. There wasn’t even any unhappiness about anything. Panic! I was having a nocturnal panic attack for no apparent reason!

A Nocturnal Panic Attack Out of Nowhere

I was just a sense of panic and it was over nothing! My heart raced like I had just run a mile and yet I had been sound asleep. This was the third time this week this had happened, and only the second series of episodes in my life.

I had my first nocturnal panic attack and it was completely un-triggered.

I have suffered with anxiety for several years. Now, I am sure it has been longer but it has reared its head just in the last several. I had gone through a time in a previous marriage where I went through so much worry, so much stress, so much fear on a seemingly daily basis that now my body didn’t know how to exist without it.

My brain started to LOOK for something to worry about and would produce those feelings even when it found nothing. I was at peace in my life now but my body hadn’t yet caught up.

You see, for those of us with general anxiety, our brains are overactive in looking for something to worry about. Mine works overtime because it’s been so used to it for so long that it seems to crave it. It literally hadn’t learned yet how to exist without it.

Now here I was, just after starting my blog, having nocturnal panic attacks in the middle of the night out of nowhere.

Here I was, just after starting my blog, having panic attacks in the middle of the night out of nowhere.

A Christian With Anxiety??

“Be anxious for nothing but in everything, by prayer and supplication, with thanksgiving, make your requests be made known to God; then the peace of God, which surpasses all understanding, will guard your hearts and minds through Christ Jesus.” Philippians 4:6-7 (NKJV)

But in the King James version it says,

In the Strongs Exhaustive Concordance, the word here “careful” in Greek is ‘merimnaō’ and means: Worry, be concerned – take thought, anxiety

These words are more about worry or concern and an anxiety that comes from that, such as worrying about a problem. We all experience that from time to time. We experience that kind of anxiety when we have a job interview, must speak in public, get married, etc. But what I was dealing with here, after reading that verse, was not that kind of anxiety.

This was a real, physical reaction to absolutely nothing!

There was no worry, there was no concern, and where I had no worry or concern there could not possibly be a lack of faith, right? I just had a very real physical response to nothing. In fact, during this nocturnal panic attack, I was sound asleep!

I struggled with this for days because I feared (yes, here IS where concern and worry kicked in) that this was going to be an ongoing addition to my already problematic general anxiety.

Then I started to imagine things that could be wrong with me. It just began to snowball! The enemy latched on and began filling my head with all kinds of imaginings! What started off as a panic attack turned into so much more!

I started to have the anxiety the Bible DOES refer to! I started to worry about this so that it consumed me!

“Be anxious for nothing…….”

Then I heard those words over and over in my mind calming me. It was like something (or someone rather) wanted me to feel condemnation for this attack that I had no control over and God was there with His Word comforting me.

You see, I had quickly crossed the threshold from HAVING anxiety to BEING anxious.

You see, I had quickly crossed the threshold from HAVING anxiety to BEING anxious.

I was creating problems where they didn’t exist and that was causing more anxiety. For a period of 3 days it became a never-ending cycle. Those with anxiety, you know exactly what I am talking about.

It is normal for people with anxiety to expect the worst because your mind and body are already in preparation for it! You end up in a cycle of chronic worry!

But I kept hearing it….

“Be anxious for nothing…….”

I kept feeling that I was failing God. I WAS being anxious! Was my faith wavering? Was I disappointing Him?

Well, the enemy tries to manipulate us through making us feel like we are failing in our walk!

My Nocturnal Panic Attack Was Just That! An Attack!

You see, God gave me a revelation one day that week. The words “panic ATTACK”.

I had just started my blog. I was opening up to people and telling my story, something I was not comfortable doing. My blog was encouraging people. I was hopefully leading people to a closer relationship with God by stepping out of my comfort zone and stepping IN faith.

And now, during the night, during a time when I needed my rest most because I am not a good sleeper anyway, I was being attacked. These nocturnal panic attacks were spiritual attacks as well! But not exactly the panic attack itself!

It was more the thoughts that went through my mind afterwards.

The attacks were more about me questioning whether or not there’s something wrong with my physical health, maybe I am having a heart attack! They were about questioning my spiritual health! Maybe I am not good enough for God to use if I can’t even get a victory over worry! Those were the attack!

“For the weapons of our warfare are not carnal, but mighty through God to the pulling down of strong holds; Casting down imaginations, and every high thing that exalteth itself against the knowledge of God, and bringing into captivity every thought to the obedience of Christ;”

You see, I am not saying that all panic attacks are attacks of the enemy. That’s absolutely not the case!

Don’t feel that if you go through these that you are under attack. This is a very real condition for people.

I am saying for ME, lying there at night when I had NEVER experienced anything like this in my 50 years, I just KNEW this WAS an attack because of the thoughts the enemy was placing in me afterwards! He was making me feel like I couldn’t possibly serve God if I was going through this.

So, I started to do what the Bible says to do…

“Put on the whole armour of God, that ye may be able to stand against the wiles of the devil.” Ephesians 6:11 (KJV)

“Submit yourselves therefore to God. Resist the devil, and he will flee from you..” James 4:7 (KJV)

Submit yourselves to God…resist…put on the armor of God…..

When you step into what God has for you and when you start to align yourself with God’s will, the enemy gets in a fit.  His greatest pride is when he can get a Christian to stop living in God’s will for them. I have often heard the saying,

“If you are not running headfirst into the enemy, be careful! You might just be heading in the same direction.” ~Unknown

If you are not running headfirst into the enemy at every turn be careful, because you might be heading in the same direction – Unknown

So I submitted myself to God and prayed and let Him lead me. I gave Him my worries and my fears! I took every thought captive.

“We demolish arguments and every pretension that sets itself up against the knowledge of God, and we take captive every thought to make it obedient to Christ.” NIV

Was I successful ALL the time? No! But I tried, and I continue to try because it is an ongoing battle!

I knew I was just to keep going, not give up what I was doing with my blog. But I had to let Him lead and He could only lead when I was submitting it all to Him. I prayed…a lot…and asked for prayer from others. I buried myself in the Word. I prayed the Word. And I put on my armor!

I realized I had been so focused on the DOING for God, I had lapsed in just being in His presence where I am revived, refreshed and renewed.

The nocturnal panic attacks never happened again. I have not had one since. Not a single one.

When we get so busy DOING for God that we lose the time we spend WITH Him, we can let our guard down. We can leave a crack in the door and a clink on the armor for the enemy to come in and attack us where we are weakest. We can become full of ourselves by thinking we are so BUSY for God.

My anxiety was an open door for the enemy.

We have weapons of warfare, we CAN resist the enemy, but we need to submit to God first.

I now know that I cannot do what I am doing here without making sure I go to sit at His feet each day. I know that once I stop doing that then I am just doing works and not having relationship. And in doing so, I am taking Him out of what I am doing and I am going rogue!! So make sure you make time to just BE! Just BE in His presence. Just BE in His Word.

WHERE IS GOD IN MY TRIALS?

DROPS IN THE BUCKET – RECOGNIZING SUBTLE ATTACKS OF THE DEVIL

SPIRITUAL WARFARE- BEING MORE THAN A CONQUEROR REQUIRES A BATTLE