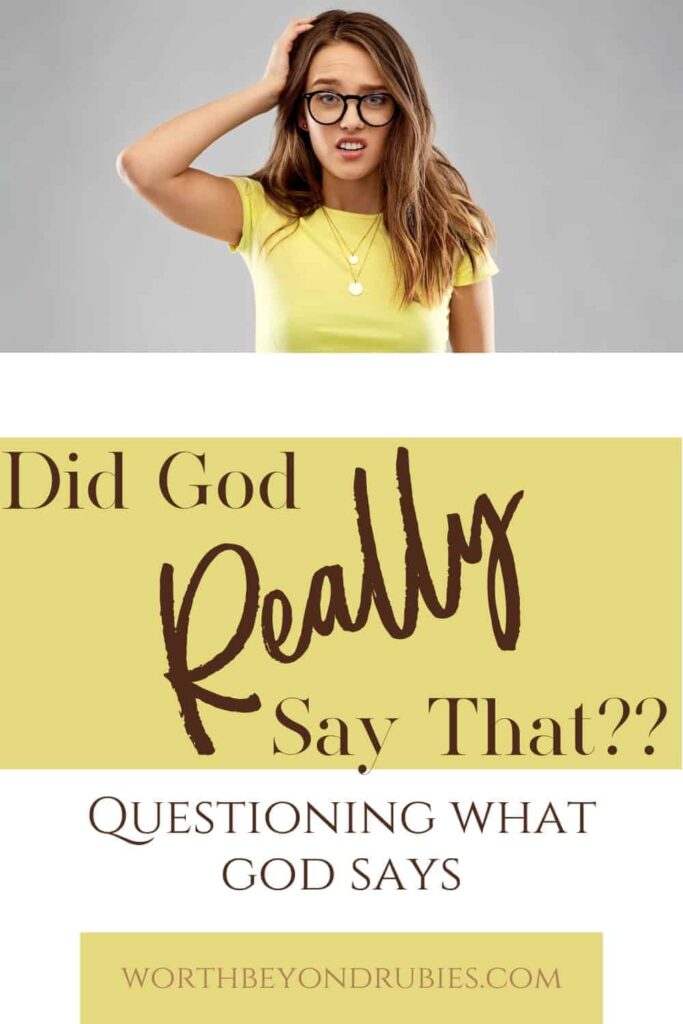 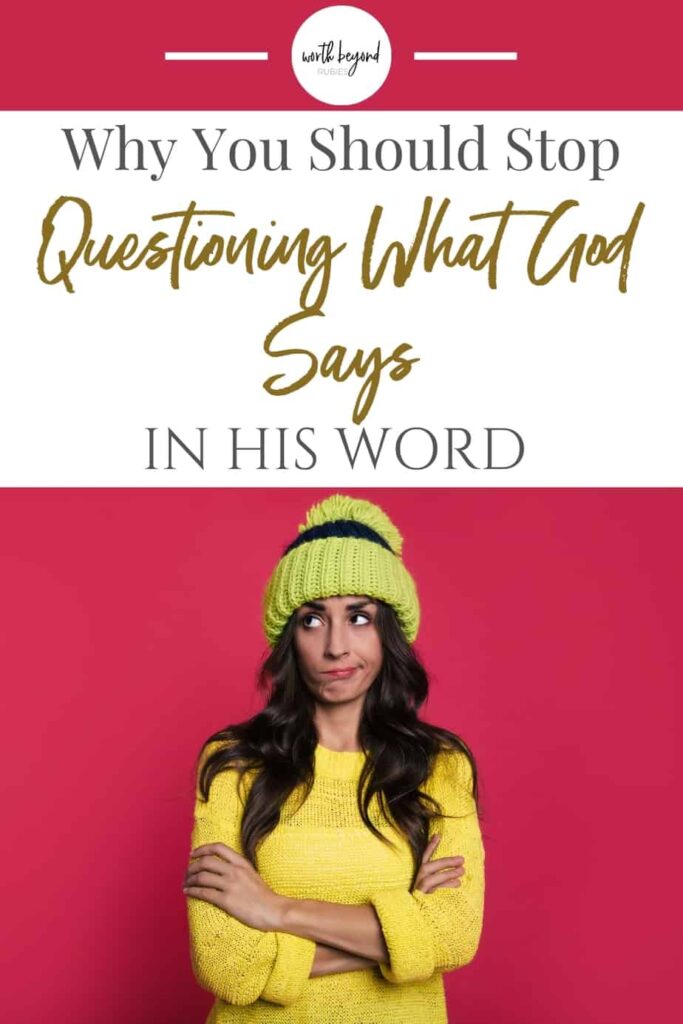 Since the beginning of time, people have been questioning what God says!

They questioned His Word when it was spoken directly to them and we question it today as we read and study the Word.

We love to quote motivational and encouraging verses because they feel good to us, but sometimes we struggle with the Word when it appears to be in contrast to what WE want or what WE feel or what WE believe we know about the Lord.

Learn how questioning what the Lord says can lead to treading into dangerous territory, as well as who is leading you there!

As I mentioned, calling God’s Word into question has been going on since the Garden of Eden.

So we see that Adam and Eve were given the Garden of Eden and all that it afforded them. All the blessings of the Lord were theirs, including the very presence of Adonai! Genesis tells us the Lord walked in the garden in the cool of the day (Genesis 3:8) and spoke with them.

They were given ONE restriction! God gave them the fullness of His blessings with ONE restriction. Mankind and the Lord in relationship with one another! Paradise!

But an enemy was in the midst of the garden. The serpent wasn’t having any of this!

The enemy took the one thing mankind was restricted from and made them call into question God’s Word.

Did God REALLY say that you must not eat from that tree??? Are you SURE that is what He said? Surely a God who wants to give you all things wouldn’t keep that one thing from you so if He DID then it had to be because He wants to keep you from being as powerful as He is! He is trying to keep something good from you!

And that serpent hasn’t stopped that message, even today! “God is withholding something from you”, “God doesn’t want you to be happy”, “God would rather bless that other person than you”. The lies have persisted for millenia.

People will always question whether or not what the Word says is interpreted correctly in an effort to justify certain actions or behaviors. When they come across a verse that seems to indicate what they are doing is wrong they will say “Well, doesn’t that really mean….?” or “Well that is just a matter of interpretation and can mean different things.”

We begin to create Scripture of our own making so that we can interpret it any way we like so it fits into whatever box we want to put God in.

After all, we often don’t want to make uncomfortable changes in our lives. We don’t want to give up things we enjoy! So GOD must be wrong, not us.

God commands us not to create a god in our own image and when we interpret scripture in a way that suits our situation, we are saying “To me, God is….” and creating a god of our own making; a god who is ok with what we do.

TO ME it says…

TO ME it means…

These are all idols as much as if we erected a golden calf in our own living room! We’ve created a god that suits us and we worship THAT one instead of the One who says “I am Hashem your God!” (Exodus 20:2)

The Serpent in Our Garden

When we are tempted, when we are faced with decisions in life, when we are struggling with sin, the serpent in our garden whispers to us and asks us if the Word is REALLY what God meant or are we misinterpreting it somehow and if we ARE getting it right, then God must be afraid of us becoming too powerful for Him somehow!

It is a lie the enemy has used since creation and with good reason; it’s an effective one.

All along the enemy’s mantle are metaphorical trophies with human faces for each and every God-Follower he has led astray and he has a spot dusted off for yours too.

You are his prize! Don’t let him have you! Take every thought captive!

He WANTS you to call into question everything in God’s Word because that reveals to you exactly who he is!

All along the enemy's mantle are metaphorical trophies with human faces for each and every God-Follower he has led astray and he has a spot dusted off for yours too. Click To Tweet

Eve’s name in Hebrew is Chava. The root of this name is Chaya, meaning ‘living’. The Hebrew phrase “l’chaim” means “to life” with “chaim” being from that same root word.

Chava was the mother of the living but the serpent wanted to bring sin and death. He is the destroyer! He wanted to make sure the children of Chava never had a chance.

It didn’t stop with Chava. It continues on with her children; with you and with me. God’s Word breathes life into our lives but the enemy spews lies and death!

Stop speaking to the very things God says you need to be stomping on!

Stop speaking to the very things God says you need to be stomping on! Click To Tweet

"Truth is the essence of Your word, and all Your righteous rulings are eternal."

"Trust in Adonai with all your heart; do not rely on your own understanding. In all your ways acknowledge him; then he will level your paths."

"This book of the Torah should not depart from your mouth—you are to meditate on it day and night, so that you may be careful to do everything written in it. For then you will make your ways prosperous and then you will be successful. Have I not commanded you? Chazak! Be strong! Do not be terrified or dismayed, for Adonai your God is with you wherever you go.”

"Teach me Your way, O Lord;I will walk in Your truth;Unite my heart to fear Your name."

"Every word of God is purified.He is a shield to those who take refuge in Him. Do not add to His words, or else He will rebuke You and prove you a liar."

"Whatever I command you, you shall be careful to do; you shall not add to nor take away from it."

"Be diligent to present yourself approved to God as a workman who does not need to be ashamed, accurately handling the word of truth."

God’s Word is true and firm. We do not have the right to change it to suit our needs. It is clear that doing so is nothing short of rebellion and if you lead others astray you will bear that responsibility as well.

The enemy wants you to feel restricted and burdened by the Word, but it is anything but burdensome. It is freedom! It is freedom from sin and death.

Do not believe the enemy’s lies! Do not believe him when he entices you to be rebellious! When he speaks lies to you, counter those lies with the truth of what God says in His Word! He is already defeated! Remind him of that fact!