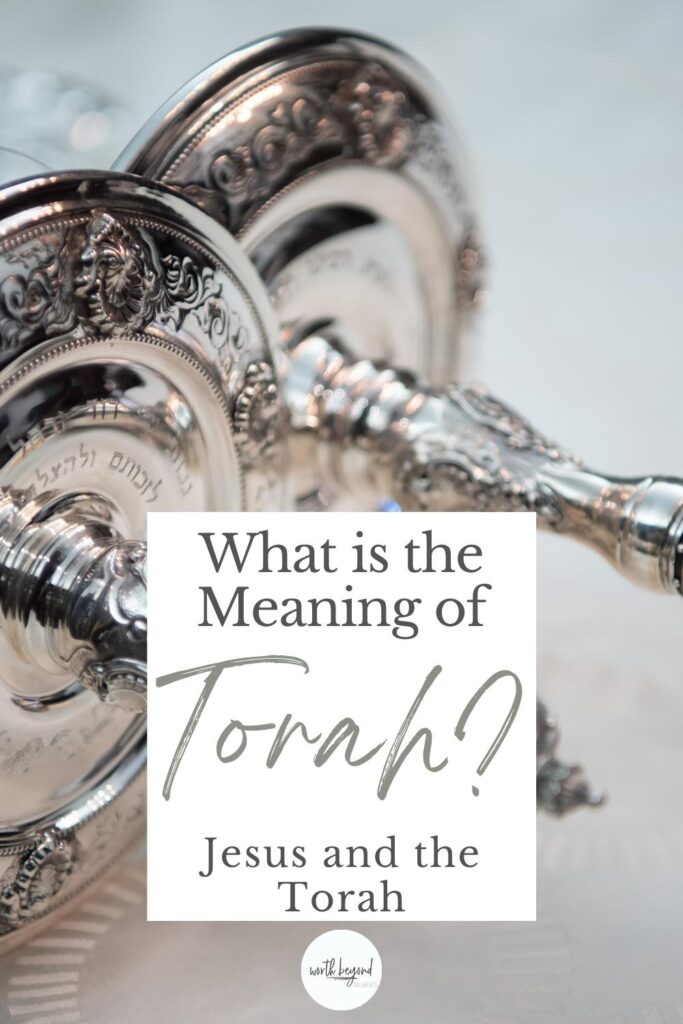 What does the word Torah mean? Many people think that it means law. This is not only inaccurate, but it also misses the heart of what the Torah is. What about Jesus and the Torah?

Many think Yeshua (Jesus’ name in Hebrew) abrogated Torah – did away with it. This is also inaccurate.

In this article, we are going to explore the true meaning of the Torah, what it encompasses and whether or not Torah is relevant to our lives today! We will also explore Jesus and the Torah – we will look at His relationship to the Torah, His observance of the Torah, and what it means for us as believers today.

So read on and learn more!

What is the Torah?

The Torah is the Five Books of Moses but also refers to the entire corpus of religious Jewish knowledge. The word Torah literally means “instruction”.

It discusses the creation narrative, the faith of the patriarchs, the Exodus from Egypt, and freedom from slavery for the Jewish people.

It was given to Israel as a sign of God’s covenant with her.

It is the ketubah, the “marriage contract”, that spells out the standard of holiness expected of her with decrees, laws, and statutes in order “to be a light to all nations,” leading all the nations toward God. (Exod 19: 5–6)

Despite some thought and teaching to the contrary, Yeshua’s teachings are based on the Torah. The Torah is precisely where the Gospel’s ideas are first introduced.

It is where we learn about God, holiness, purity, sin, sacrifice, repentance, faith, forgiveness, covenant, grace, and righteousness.

Yes, grace is IN Torah!

As I mentioned, many times people mistranslate the word Torah as ‘law’.

While we do see that the Torah is sometimes referred to as ‘The Law of Moses’, it CONTAINS law but it is not the law in and of itself.

In fact, when the word Torah is used, many apply it not only to the five books of Moses but also to the rest of the Tanakh (the Jewish Bible), and, as you will see, many Messianic Jews also believe it encompasses the Besorah (Gospel) as well.

What Does the Word Torah Mean?

According to First Fruits of Zion:

Like FFOZ, many esteemed Messianic Jewish scholars are also of the opinion that Torah includes the Brit Chadasha, known as the New Testament to Christians.

I prefer to use the term NEWER Testament, as one of my esteemed teachers, Rabbi Stuart Dauermann does. Older Testament and Newer Testament signify chronology rather than a replacement or preference. So you will see me use those terms.

It should not be written off as some archaic set of books that have no meaning to the Christian.

Remember, when Timothy says “All scripture is given by inspiration of God….”, he did not have a Newer Testament.

Jesus and the Torah – What Did Torah Mean to Him?

What does the word Torah mean when we look at Jesus (Yeshua)?

Let me first state the obvious. Jesus was a Jew. His followers were Jews. Paul, the author of many of the letters of the Apostolic Writings was not only a Jew but a Pharisee (and he states it in the present tense, not past tense).

So Jesus and His followers read Torah and studied Torah and there is nothing in scripture that indicated they ever ceased doing so.

We see them continuing to go to the Temple, continuing to keep the Sabbath and Festivals and we see this after Yeshua’s death and resurrection as well.

Jerusalem remained the hub of all their activity because that is where the Temple was located.

Next, let’s clear up that very common misconception.

Yeshua did not do away with Torah. Actually, it was quite the contrary. Yeshua is the LIVING Torah.

Renowned scholar (and one of my all-time favorite people), Amy-Jill Levine, Professor of New(er) Testament, and Jewish Studies, and may I add, a Jew (non-Messianic), quite frequently states that Yeshua not only did not do away with Torah, He often expanded upon it.

For instance, she says the law tells us not to murder. Yeshua says don’t get angry; that’s harder.

She says that the law says not to commit adultery but Yeshua says don’t even look; that’s harder.

What Yeshua is actually doing here is not only focusing on the action itself but the intent – which often leads to the action.

He is putting a fence around Torah, not doing away with it.

Sin takes root in thought and in the heart, so start there.

He didn’t abrogate Torah; He embodies it.

Yeshua did not do away with Torah. Actually, it was quite the contrary. Yeshua is the LIVING Torah. Click To Tweet

Yeshua used Torah in the wilderness to fight off the enemy’s temptations.

Let’s have a look and see Jesus and the Torah as He quotes from it to defeat evil itself.

First, let’s look at the overall text of Yeshua and the temptation in the wilderness and then break it down further.

Now we will look at each instance.

In Matthew 4:4 Yeshua says, “It is written, ‘Man shall not live by bread alone, but by every word that comes from the mouth of God.’”

Here He is quoting Deuteronomy 8:3 which says “He afflicted you and let you hunger, then He fed you manna—which neither you nor your fathers had known—in order to make you understand that man does not live by bread alone but by every word that comes from the mouth of Adonai.” (TLV- Bible Gateway)

Now let’s look at Matthew 4:7 where Yeshua says, “Again it is written, ‘You shall not put Adonai your God to the test.’“

That is from Deuteronomy 6:16 which says, “You are not to test Adonai your God, as you tested Him at Massah.” (TLV – Bible Gateway)

Then there is Matthew 4:10 where Yeshua says, “‘You shall worship Adonai your God, and Him only shall you serve.’

This is from Deuteronomy 6:13 which says, “You must fear Adonai your God and serve Him, and swear by His Name.” (TLV – Bible Gateway)

And there were many other instances where Yeshua quoted Torah as well.

When the young lawyer approached Him and asked Him what was the greatest commandment, Yeshua replied as such:

This is a quote from v’ahavta which is a prayer that is a continuation of the Shema.

He is quoting Deuteronomy and Leviticus here.

Even if we ignore the fact that He specifically mentions the Torah and Prophets, Yeshua in this verse from Matthew is making it quite clear that when we look at Jesus and the Torah we can see that He is NOT abrogating Torah.

Torah is embodied also in the practice of Mussar, which we offer at Besorah Learning Center.

Each middah or spiritual trait is what draws us toward following Torah from our hearts, where it is written.

All spiritual disciplines and practices, from humility to equanimity to keeping kashrut are covered in Mussar.

So we welcome you to give it a try. You can find out more info on our Mussar page.

Jesus and the Torah as seen in scripture clearly show that Torah is not something that is done away with.

It is God’s covenant with Israel and Yeshua is the One Man Israel who joins Jew and Gentile together in one union in Messiah – one ekklesia.

We may have distinct identities but we worship one Messiah as a united community. Jesus and the Torah are not independent of one another. He IS the living Torah.

Next time we will discuss the Oral Torah!