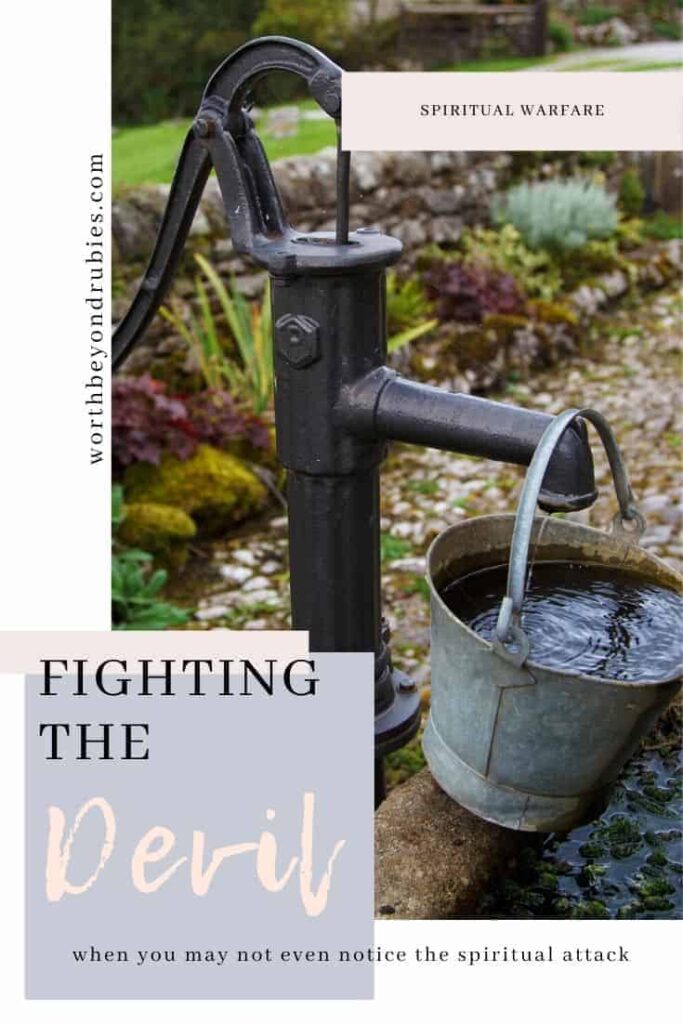 Fighting the devil is most effective when we learn to recognize how the devil attacks us. The warfare doesn’t always begin as full on, obvious attacks. It often begins like small drops in a bucket and many times may go unnoticed until it escalates.

Have you ever put a bucket under a water spigot outside but the spigot is turned off? You think you won’t have a problem because you cut the water off at the source. You may notice one drop or two coming out of the spigot and watch as they land in the bucket. But you ignore it because after all, it’s only a couple of drops.

How the Devil Attacks – An Overflowing Bucket

So you walk away!

Fighting the Devil Means Knowing How He Works

The attacks of the enemy are often like those drops in the bucket. The overflow of water that eventually occurs started as just a single drop.

That single drop that we paid no attention to.

Sometimes he attacks us with a strong, overt attack that is unmistakable and injurious. But most times, they are like drops in that bucket; seemingly undetectable.

He knows that if we recognize the attack we can fight it. If that faucet just started pouring water out as soon as we put the bucket under it, we would immediately notice and shut it off! However, we are less likely to notice the small drops.

We often just chock these small attacks up to a bad day or a bad mood.

Sometimes the enemy attacks us with strong, overt attacks. But most times they are like drops in a bucket; seemingly undetectable. #spiritual warfare #armorofgod Click To Tweet

That is how Satan works! He wants you to just toss it aside and think these things just “happen”.

And sometimes they do!

I don’t like to see the devil around every corner! Sometimes things just happen and have nothing at all to do with him or any attack. But stop and pray all the same!

When you take the time to pray about that “bad day” you are giving it over to God and even if it is not the enemy coming at you, prayer can take the focus off the bad and put it on God.

However, many times those things we just toss aside as being no big deal are just what the enemy uses to build up your feelings of annoyance, aggravation and frustration until, next thing you know, you are just in a foul mood!

Fighting the Devil Means Realizing He Knows You Well

The enemy knows what grates on me; he knows what is an effective attack.

The enemy is well aware that I get upset and hurt easily! So what’s he going to do?

He’s going to give me little things here and there, carefully aimed drops throughout my day, that will cause me to look at my “bucket” at the end of the day and realize that I didn’t even notice it was overflowing. He will invade my home without me even detecting he entered.

The enemy is not always storming at us full force! Don’t always look for the big, overt attacks. Watch the smaller ones that build onto each other! Then shut it off at the source!

The enemy is not always storming at us full force!  Don’t always look for the big, overt attacks. Click To Tweet

If you quit smoking, for instance, he is not going to have someone show up at your door with a carton of cigarettes and try to get you to start up again! You’d slam the door and walk away!

No, he’s going to produce little drops; little stresses that add up and finally cause you to feel like you need to have a cigarette in order to deal with the stress!

How Satan works is with a whisper “Just have one! It will make your stress disappear!” and next thing you know, you’re smoking again!

You see, any one of those drops alone would seem like no big deal and, like the drops in a bucket, would go virtually undetected. They would seem to be simple annoyances and that’s all.

But all of them together produce stress, pain, hurt, anger, depression, despondency and sometimes we can’t even pinpoint WHY we feel that way because the drops were SO small!

So fighting the devil means keeping an eye on the bucket….

Don’t just pay attention when the water is getting high! Watch for the first signs of a drop, the first signs of spiritual warfare and initial spiritual attack, and then give that “drop”, that problem, that offense, that weak moment, over to God so He can help you shut it down. Then you will never have to worry about an overflow.

Be sure to get your FREE Prayers and Scriptures for Effective Spiritual Warfare Workbook below!