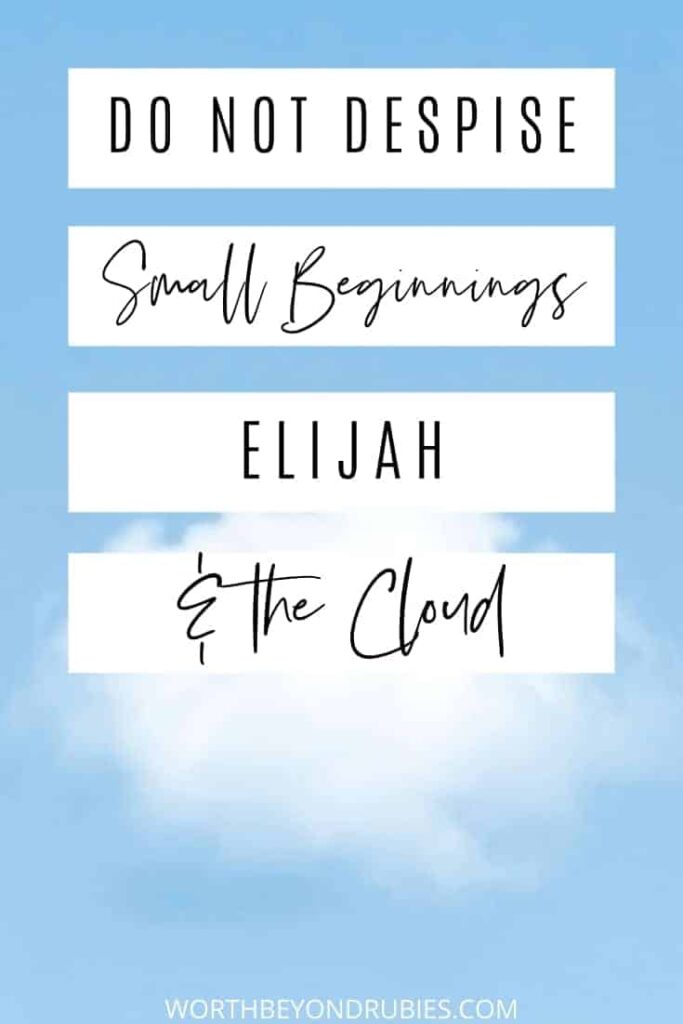 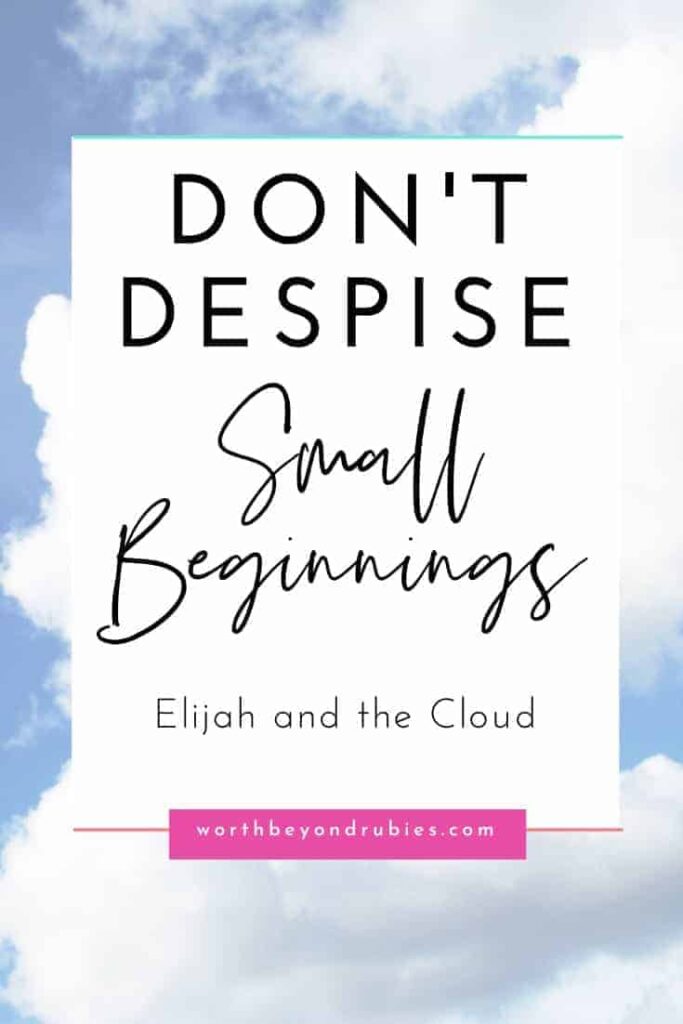 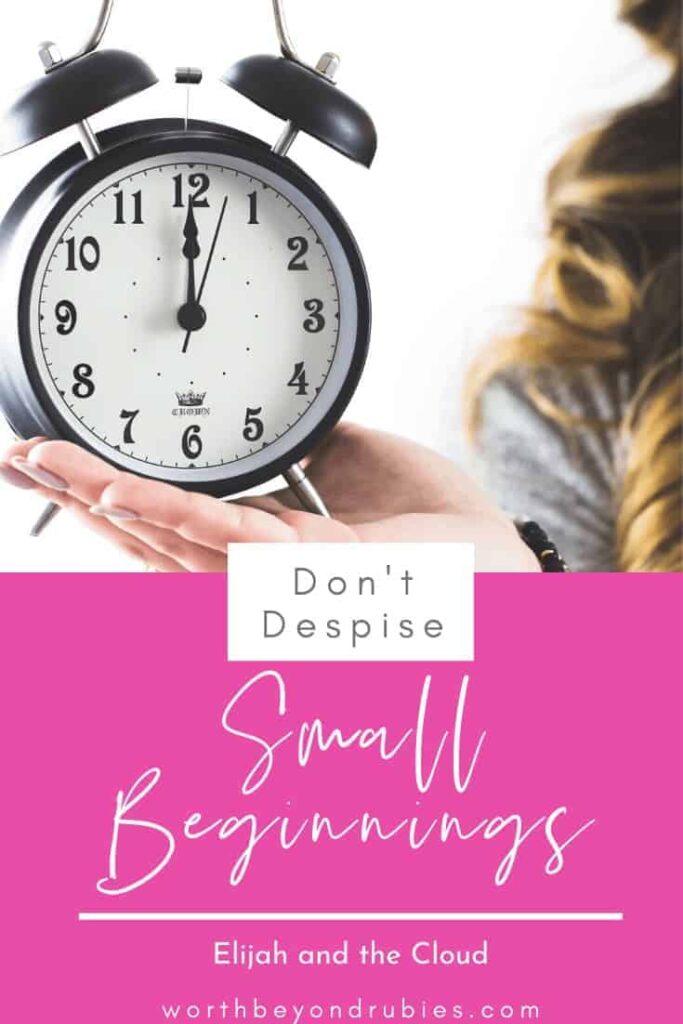 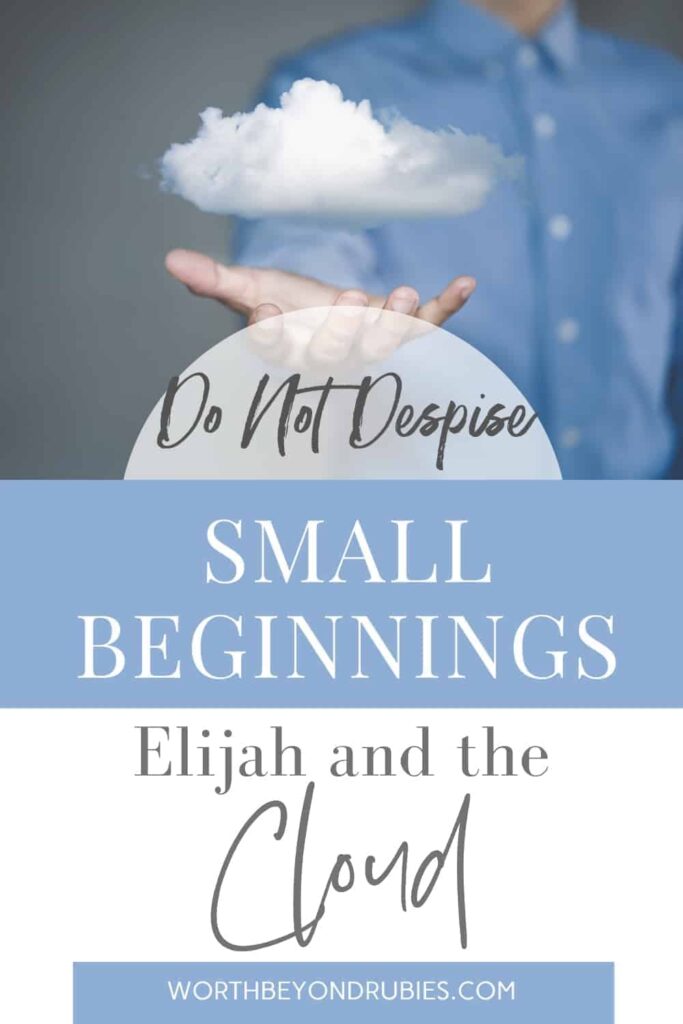 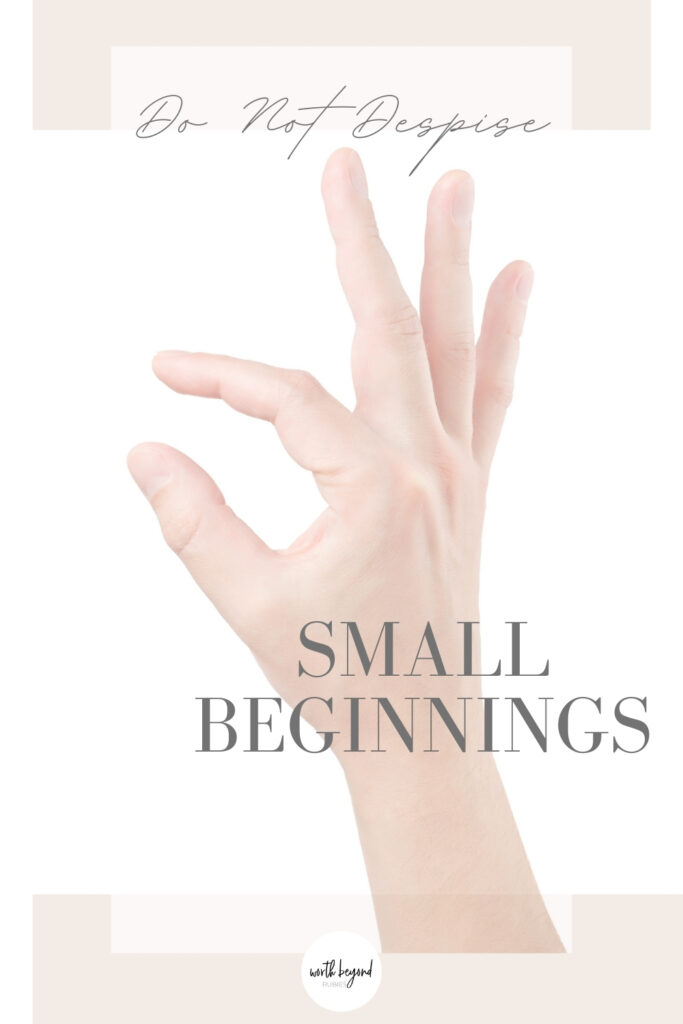 You’ve probably heard this quote from the Bible used in varied ways before; do not despise small beginnings! We may have heard it or read it but at the end of the day, small beginnings can be frustrating for just about anyone!

It doesn’t matter if you are a blogger or starting a business or going to school, it may even be a relationship; we all want the next step to come faster! We want things to move along quickly and having to take one small step at a time can feel like we are just not moving at all! We all want to see SOME evidence of progress, don’t we?

But many times, that evidence just doesn’t come right away. So how do you make the most of those times when things don’t seem to move as fast as we would like? Read on to learn how!

Elijah is one of my favorite biblical figures for a variety of reasons. I admit, that sassy and sometimes sarcastic side of myself loves reading about how he mocked the prophets of Baal. I probably shouldn’t love that story as much as I do, but the important thing is how can you not when the Lord of Hosts shows on up that way?

But I digress! Let’s move on to the story!

Elijah was a major prophet of God and, in this account we will look at, the land was experiencing a period of drought.

He had a promise from God that He would send rain upon the land. So, Elijah goes to Ahab, king of Israel, and says, in 1 Kings 18:41:

Now, at this time, there isn’t a cloud in the sky, but Elijah had faith! He trusted the Word of the Lord.

So, King Ahab actually listens to him (go figure!) and he goes off to do just as Elijah said. He heads off to eat and drink, but Elijah had other plans.

He goes up to the summit of Mount Carmel. And what does he do?

Do Not Despise Small Beginnings – Do Some Cloud Watching Instead

He got down on the ground, put his face between his knees and he prayed!

But that is not all he did. While he prayed he sent his servant to look for signs of rain!

Let me say it again – while Elijah prayed, he sent his servant to look for the answer to his prayer.

When we are praying, are we looking for the beginnings of our answer?

Now that is faith! He prayed expectantly! He prayed with faith. He KEPT looking for the answer he KNEW was coming because he trusted the Lord.

He sent his servant to check for rain not once! But 7 times!! Each time the servant came back and reported nothing! But Elijah stayed on his knees and kept sending his servant back.

Seeing Past How the Situation “Appears”

A cloud the size of a man’s hand! Now that is one small cloud!!

But upon hearing about that cloud, he sent his servant to tell King Ahab to get a move on before the downpour of rain stops him!!

He saw a cloud the size of a man’s hand and, in that, he saw the promise of what was to come! He saw past the small bit of evidence in front of him to the great things he knew his God would do.

We see clouds in the sky all the time that never result in rain! But Elijah saw rain in that cloud because he had faith in God’s promise.

He saw past the small beginning to the downpour! He saw the big God he served. There is no such thing as an impossible prayer in the eyes of the Lord!

He saw a cloud the size of a mans hand and in that, he saw the promise of what was to come! He saw past the small bit of evidence in front of him. Click To Tweet

Do Not Despise Small Beginnings – Keeping Your Faith During Hard Times

Keeping your faith in God during hard times is not always easy! It is really difficult when you are starting a ministry or a business and things just don’t seem to be moving.

As a blogger, I can tell you it happens to us all the time.

Bloggers play the comparison game. We look at what other bloggers are doing and we wonder if we are cut out for it. We think we aren’t as good or as smart and we question whether we are doing what God wants us to be doing.

We measure our speed of growth against others thinking our progress should be the same and, if it is not, we wonder if we are cut out for it!

And we see them getting lots of followers or earning an income doing what they love, and we sit back and look at our pageviews or mailing list and think maybe we heard God wrong.

And sometimes look right past that cloud the size of a man’s hand. We sometimes look past the little things thinking we missed God but God is working to bring a harvest out of that small seed.

Look at a garden. We don’t plant a seed and then think God didn’t want us to grow those tomatoes because they didn’t sprout the next day! But yet so many times we look at our work or our ministry or our relationship and think we got it wrong because it is not progressing as fast as someone else’s.

And we miss the cloud.

So many times we look at our work or our ministry or our relationship and think we got it wrong because it is not progressing as fast as someone else's. And we miss the cloud! #elijah #proverbs31 #faith Click To Tweet

Zerubbabel was a descendant of the House of David and the son of Shealtiel. His family was forced into exile in Babylon, where he was born. Zerubbabel made his way to Judah after King Cyrus II allowed the captives to return and he was subsequently made governor.

He was tasked by the Lord to rebuild the Temple but he had faced obstacle after obstacle over many years.

The Prophet Zechariah had a vision of a menorah, which was a furnishing in the Holy Place of the Temple, as well as two olive trees (the details of which will be for another post but you can read about in the Book of Zechariah).

In this vision, he was instructed to encourage Zerubbabel to continue the rebuilding of the Temple in spite of the obstacles he faced, which Zechariah likened to mountains.

Do you ever feel as though your obstacles are like mountains standing in your way? Well, our friend Zerubbabel knew that feeling as he tried to follow the Lord’s instructions.

Who despises the day of small things?

Yes there may be mountains in the way but each small step toward the goal, each external opposition we may face, each of the open doors we go to step through that seem to slam in our face, will result in rejoicing as we reach our God-given goals.

The plumb line in hand of Zerubbabel was used to measure out and build the Temple according to the specifications in Torah. What it represents here is that he will continue the work the Lord called him to. He WOULD build the House of the Lord. And the eyes of the Lord which go throughout the whole earth would rejoice in the building of His House.

And He will rejoice with you as you continue forward with each small step.

Do not despise small beginnings!! Trust that it is just that; a beginning!

If He called you to ministry, trust that God is working it out!

You are in this, hopefully, for the long haul. It is not important to get to the finish line first. You are not in competition with other bloggers or other people in your business or your friends and their relationships.

It is so easy to talk yourself out of what God wants you to do!

The enemy loves to use this time to discourage you and defeat you. He loves to whisper in your ear that God isn’t using you.

The enemy loves to make you believe that pageviews and subscribers are what defines you!

He wants you to feel that God couldn’t possibly use you!

He wants you to feel like you’re not good enough for a relationship and shows you all your friends getting married and you’re still single!

The enemy loves to tell you there must be something they have that you don’t! He wants you to think you need to push harder to get things to move faster.

The enemy loves to make you believe that pageviews and subscribers are what defines you! Click To Tweet

Faith in God Includes Faith in His Timing

Elijah knew that faith in God includes faith in His timing! He knew that it was just a matter of waiting! He didn’t doubt the rain would come!

Elijah got on his knees in prayer while watching for that cloud. He prayed and anticipated!

The best thing you can do is not play the comparison game the enemy wants you to play, but pray and have faith and do not despise small beginnings in your life!

Express thanks to God for where He has you positioned right now and enjoy the moment! He has you where you are for a reason!

If you are a blogger, pray and write for that audience, even if it is an audience of one in the beginning!

Write for God! Write for the people He WILL send to you!

It is in those small beginnings you can build and exercise your faith. It’s in them that you can look back and see what God did in your life/your blog/your business/your relationship.

Pray and have faith! Avoid comparison because your walk isn’t supposed to look like everyone else’s. You are unique and God is using you in a unique way!

Instant gratification would rob us of the growth we gain in the waiting!

So do not despise humble beginnings! God is using them in a big way!

Have you experienced small and slow beginnings where you were able to look back and see how God was using that time in your life?

When we say ‘do not despise small beginning’, how can you apply that in your own life and walk with the Lord? Share in the comments!

Be sure to grab your FREE Sermon Notes & Bible Study Mini-Pack below as my gift to you!