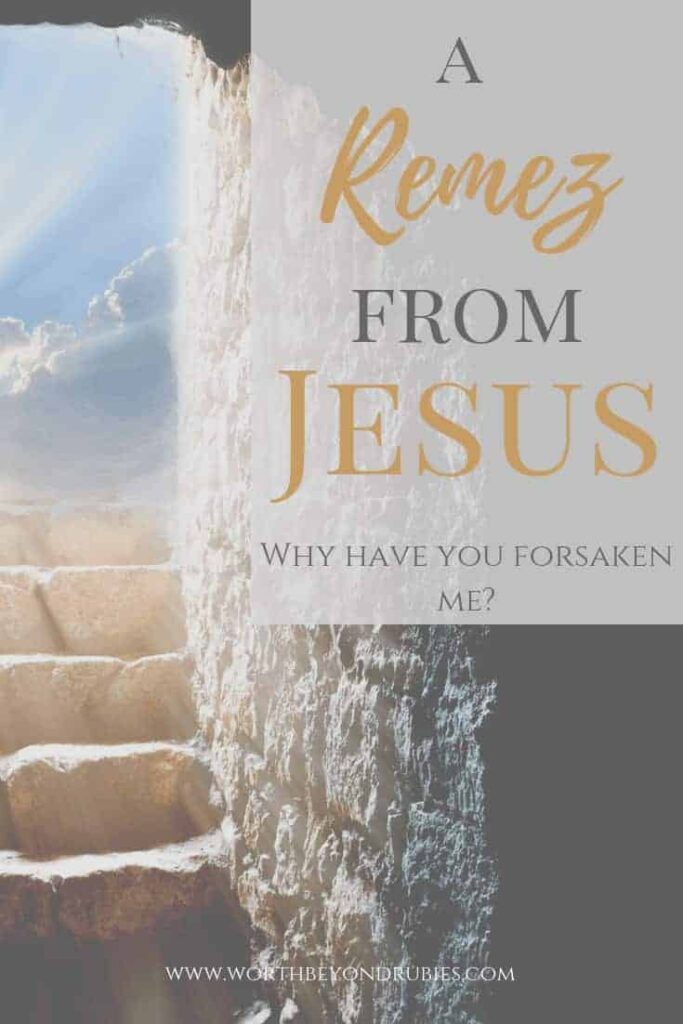 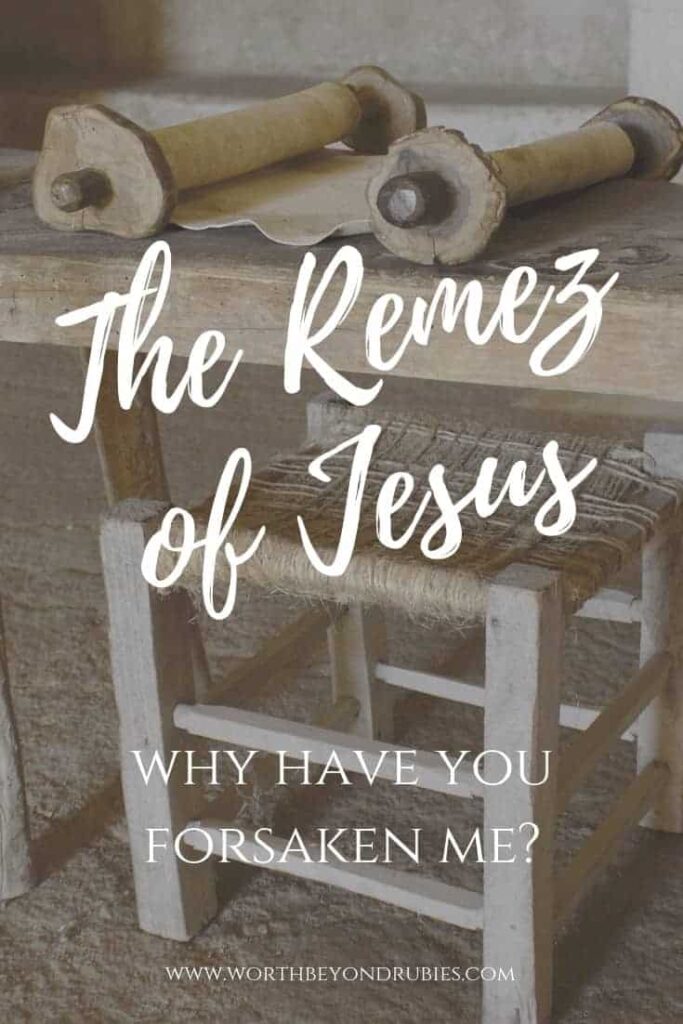 In Matthew 27:46 when Jesus spoke from the cross and said “My God, my God, why have You forsaken Me?”, was He really asking a question of Adonai? Did He go through all that pain and effort it required for Him to speak just to question God? Or was this a phrase and a technique known as a ‘remez’ and not a question at all? Why did Jesus say “Why have You forsaken Me?” and what is a remez? Read on to learn more!

The Weight of the Cross

On Calvary, Yeshua (the Hebrew for Jesus, which I will use interchangeably), His back bloody and raw from the Roman whipping post, lifted all His weight up using his feet and slid His bare flesh up that wooden cross.

During crucifixion, a person’s weight hung down on the cross, pulled down by gravity. This made it difficult to take in oxygen. In order to take that needed oxygen into their lungs, they had to lift their weight up somehow and take in enough air before having to lower their weight again.

That is why legs were broken as a means of speeding up death. With the legs broken, a person couldn’t lift their weight up and they would suffocate.

The effort it took the Messiah to do that was significant.

Not only did He have to lift up all his weight in order to bring that vital oxygen into His lungs to speak, He had to slide His raw, striped back up the wood with its rough and splintery surface, in order to do it.

Yeshua felt, seven distinct times, that He had something so significant to say that it was worth all the agony to say it!

Imagine the weight each word carried.

A Remez- Why Have You Forsaken Me?

One of these statements He made was in Matthew 27:46 :

It appears to be Jesus crying out to God to ask why His Father has left Him at this time.

Some have speculated it was because, at the moment Jesus bore the sin of the world as He took our place, God had to turn from Him since God cannot look upon sin.

But God sees us even in OUR sin. Our sinfulness does not cause God to forsake us. God cannot dwell with sin and we cannot remain in our sinful state and be in relationship, but He doesn’t turn us away.

You see, this was not a question at all Jesus was asking. Why did Jesus say ‘why have You forsaken Me’ then?

Jesus was offering a remez to the religious elite who stood by. He was making a statement, not asking a question.

Jesus felt, seven times, that He had something so significant to say that it was worth all that agony to say it! Click To Tweet

What is a Remez?

A remez is a Hebrew word and it means “hint”.

It was a method of study often used by Rabbis where they would quote a verse or part of a verse in order to have students of the Word recall the verses before and after it. The remez was simply a technique used to invoke recall of a scripture. It was not unlike an actor being given part of a sentence to help them recall the rest of their lines.

I can give you a modern day example that will give you an idea of how a remez is used and how effective it is.

If I were to say to you “Never gonna give you up, never gonna let you down” do you immediately begin recalling the remaining lines of that song? Did it come to your mind right away?

Yes, I admit it. You just got Rick Rolled in my blog post! Bet you sang it too! You did, didn’t you?

But now you understand the technique of the remez, so it worked!

A Remez From Jesus to the Religious Elite – Why Did Yeshua Ask Why Have You Forsaken Me?

You see Jesus is not asking God anything here!

He is giving the Pharisees and the Jewish leaders a remez. He is bringing to their attention the words of a Psalm.

Jesus is bringing their recall to the first verse in a very important Psalm in fact! It was Psalm 22!

In Psalm 22, a Psalm that speaks clearly of the awaited Messiah, in verse 2 (some translations have it as verse 1) it says:

A Remez – To Show Who He Was, Yeshua HaMashiach

Yeshua HaMashiach (Jesus the Messiah) is bringing this Messianic Psalm to their attention.

He was saying “I AM the Messiah”! He was in essence saying, “You remember this Psalm that speaks of the Jewish Messiah? You’re looking at Him! You’re crucifying Him!”

It would not have been lost on the Pharisees and Sadducees! They knew the Psalms all too well. They knew very well the prophetic Psalm He was recalling to them and why!

Anyone who had any doubts was likely convinced on hearing this remez from a wooden cross.

The Pharisees knew! The High Priest knew! And the Sanhedrin knew!

They saw the veil of the Temple torn from top to bottom upon the death of Yeshua!

Oh, they knew who He claimed to be, they knew He fulfilled the prophecies and God confirmed it by tearing that veil of separation in two!

The Lion is Coming!

They had stood there looking at their Messiah but they didn’t recognize Him. What they wanted was a Lion, they got a Lamb.

They could not accept a suffering Messiah. They were expecting a Messiah to free them from Rome, not come lowly riding on a donkey’s colt.

Oh but the Lion IS coming! The Lion of the Tribe of Judah! The Lamb of God who took away the sin of the world is coming again to reign and He is bringing the armies of Heaven with Him, Adonai Tzevaot! The conquering Messiah they wanted will soon be coming to reign in the Messianic Kingdom!

Oh but the Lion is coming! The Lion of the Tribe of Judah! The Lamb of God who took away the sin of the world is coming again to reign and He is bringing the armies of Heaven with Him! Click To Tweet