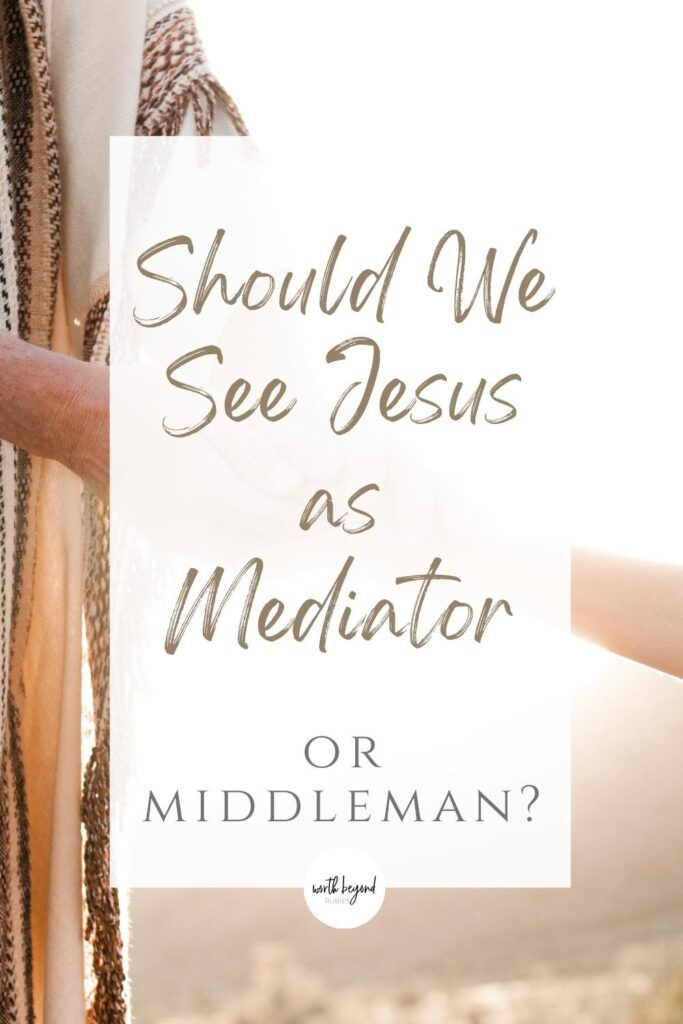 You may be thinking to yourself, “well, aren’t they the same thing?”. But the answer is an emphatic “no”. They are in actuality VERY different.

Jesus as Mediator or Middleman?

What is a Mediator?

I have not really found a definition I am fond of so I will give a couple I have found and then attempt my own using synonyms to help. No offense to any of these defining sites – I just find most definitions focus on people and even legal relationships (which is not too far a stretch when you consider covenant relationships but not the same as civil law).

So we see that a mediator helps as a go-between when there are people who are having a dispute. My only issue with this definition in our case is the word “go-between” (we will see why in a moment) and the issue of dispute. A dispute doesn’t quite go far enough for our purposes in describing our separation from God due to sin but other than that, the definition is fair enough.

I am not a big fan of this one simply because again, I find it, through no fault of its own, doesn’t quite get to the core of the matter with regards to faith but it’s not a faith-based definition so again, it’s not any fault of the defining site.

So I will attempt to define it as I see it, although I am certainly no linguistic scholar.

So now we can see what a mediator does. Let’s look at a middleman.

What is a Middleman?

On the surface, they may seem similar but there is one difference that is key.

A mediator helps broker conversation and relationships BETWEEN the parties. They bring them together.

A middleman acts as a go-between. This is why I took issue with the words go-between in the definition of a mediator. A go-between is a sort of agent. They negotiate on behalf of two parties.

So they will go to one party and maybe bring an offer and then go back to the other party and bring a counteroffer and so on.

Moses was a middleman between God and Pharaoh. He wasn’t trying to forge a relationship between them.

God was making a demand of Pharaoh through Moses and then Pharaoh would reject the demand and then God would respond in kind. That is a transactional type of relationship.

That is not what a mediator builds. It is what a middleman builds.

God would send messengers and they would act as middlemen between God and men, delivering messages to men and women here on earth.

God sent messengers to Abraham, He sent a messenger to Miriam (Mary) to announce the coming birth of Jesus Himself.

Jesus Himself USED middlemen, such as John on the Island of Patmos when He said “Write this…” and directed him to write to the seven churches.

But WAS He Himself one between God and man is the question.

I, and I would venture to say most other Messianic Jews along with me, see Jesus as mediator and not a middleman.

Jews have always believed they have a relationship with God through covenant. God is not a covenant-breaking God. Yet, our sin can most definitely cause a rift between us that only teshuvah or repentance can repair.

Yes, that is correct – Jewish belief is that repentance and atonement are needed for sin, not merely sacrifice.

It is actually untrue that the sacrifices were the only ways to atone for sin. There WERE some sacrifices that were for sin but those were primarily for sins that were unintentional and maybe you were unaware you had even committed. We all have sinned like that, right?

Maybe we said something unintentionally that hurt someone and we weren’t even aware that we said it because we were in a hurry and yes, we were ignorant.

THOSE are the types of sins that those limited sacrifices covered.

The exception here is on Yom Kippur when a blood sacrifice WAS in fact required for sins, intentional and otherwise.

So ultimately, blood was in fact required to cover sin. The Bible does tell us that the wages of sin are death. (Romans 6:23)

Something or someone had to die in order to pay for the penalty our sin incurred.

The point is that Jesus did not come to act as a middleman for God between Him and man.

He came to heal the relationship so that man and God could walk together in the cool of the day in the Garden once more in the World to Come. He came to bridge that divide and heal that wound and lead the sheep back to the fold.

But there were MANY types of offerings at the Temple that had nothing to do with sin.

If Jesus is Not a Middleman, Neither is Anyone Else

I will tell you now, there is no human on earth more qualified than you to enter into God’s direct presence through prayer. There is no human who has the ability to have the ear of the Lord more than any other.

ALL have sinned and fall short of the glory of God! (Romans 3:23)

ALL…in case anyone wants to argue with you on this one, let me say that word again for you…ALL.

That means there is not a human being on this planet who does not sin and falls short. So if they are the way to God, who is making THEIR way straight?

Is it Jesus? If so, then are they telling you that Jesus paves their way to God but not yours? YOU can pray directly to God. Period!

JESUS is the only mediator. Jesus is the WAY, the TRUTH, and the LIFE. No one comes to the Father EXCEPT THROUGH ME. (John 16:6)

JESUS is the only mediator. Jesus is the WAY, the TRUTH, and the LIFE. No one comes to the Father EXCEPT THROUGH ME. (John 16:6) Click To Tweet