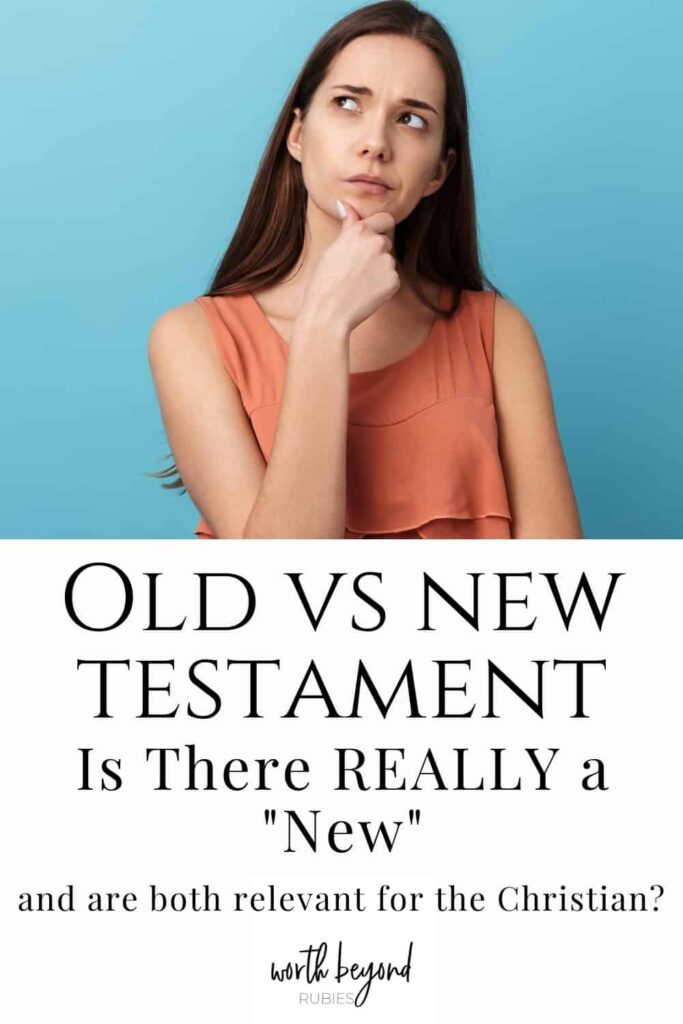 As a Jewish believer, I am often asked by people what I think of the Old Testament vs the New Testament. They wonder if I feel one is more important or relevant than the other or if the “new” replaced the “old”. So in this post, I am going to address these questions and explain why it is important for Christians to not only read both the Old and New Testaments, but to study each of them.

Updated and republished from January 16, 2020

Old Testament vs New Testament – What is the Difference Between Them?

The Old Testament or Tanakh

The “Old Testament” is a name I am personally not at all fond of since it implies something that is outdated, replaced, no longer valid.

That couldn’t be further from the truth.

I prefer ‘Tanakh’ which in Hebrew is an acronym for the Torah or 5 Books of Moses, (These are known as the ‘Teachings” of Moses or the Pentateuch), the Nevi’im or Prophets, the Ketuvim or Writings. Sounds intimidating, right?

And that right there is the issue in a nutshell. People find the Tanakh or Old Testament with all its genealogies and laws, intimidating. But we will address that in a moment.

For the purposes of this post, I will use the term “Old Testament” since that is how most Christians recognize it.

As I mentioned, in addition to Torah, we have the Nevi’im or Prophets. We have Prophets like Ezekiel, Isaiah and so on.

Then we have the Ketuvim or Writings. These are composed of books like Psalms, Proverbs, and so on.

To break this down even further, the Tanakh or Old Testament is compiled of:

The New Testament or Brit Chadasha

The New Testament (or New Covenant) is another name I am not personally fond of since it carries the implication that it replaced a part of God’s Word or replaced God’s covenant with Israel and that is simply NOT the case. God is not a covenant breaker. But since it is known by most by this name, for the sake of this post I will leave it as is.

The New Testament is compiled of:

Even though I am going to use the term New Testament in this post because people are familiar with it and because the purpose of this post is NOT to change people’s terminology, I feel I would be doing everyone an injustice to not cover what the name Brit Chadasha (again, often mistranslated into New Testament) really means.

‘Brit’ is Hebrew for covenant so that part is accurate. However, the word ‘chadasha’ is where the issue arises.

‘Chadasha’ is a word that means new or renewal, but not new in the way we think of it as in replacing something old. It is used in the sense of new as in refreshed. For example, Rosh Chodesh is New Moon in Hebrew and ‘Chodesh‘ comes from the same root word as ‘Chadasha’ and it represents the beginning of a new month on the Hebrew calendar.

Now, the moon is not new every month and the Hebrew month is also not new…they are just renewed. It’s the same moon we have always had. It’s not as though each month we have a brand new moon that replaces the old moon. It’s just new in the sense that it has completed its cycle and we are seeing it renewed again in its fullness.

Think of Brit Chadasha or New Testament as “Renewed Covenant” and not ‘new’ in that it replaces an “old”. Again, God is NOT a covenant breaker.

For those who believe that it was not God that broke covenant but Israel, let me suggest you study Israel’s history. You can even simply look at the Book of Judges. Israel was constantly in a cycle of Disobedience-Judgment-Repentance-Redemption. God did not just decide one day that the “Repentance-Redemption” part of this relationship was over.

God made an everlasting covenant with the Jewish people and this was NOT replaced. To doubt this is to call His Word into question.

What People THINK the Difference Is

In many cases, people would say the difference between the Old Testament vs New Testament is one has Jesus and the other doesn’t. Fair enough.

They may also define the Old Testament as Law and the New as Grace.

But that is not exactly true.

First, the Old Testament is not absent of Jesus at all. And we will explore that momentarily.

Third, the Old Testament is not law. It contains law. Torah does not mean “law”, it means “teaching”.

Old Testament vs New Testament – What the Difference REALLY Is

Again, putting this in a proverbial nutshell, the Old Testament foresees the Messiah and the New Testament reveals Him.

The Old Testament paves the way for and proclaims the Messiah and the New Testament reveals Him to us.

BUT, one only need to look closely enough to see that, while He was not revealed by IDENTITY in the Old Testament, He was revealed by His characteristics, His ministry, and ultimately His atoning death for us. He was revealed through prophecy.

The Old Testament paints a picture of what the Messiah will be if not exactly WHO he will be. It speaks of His qualities, His coming, that He will be born in a specific place, that He will suffer, that He will come lowly and not as a conquering political figure.

But even more than that, it speaks of His love for us and His plan from the point of creation to the coming Messianic Kingdom.

As I said earlier, Torah is often thought to be “THE LAW” but in actuality, Torah simply means teaching. While it contains law, it is not the law in and of itself. We learn much about the character of Hashem our God in the Torah.

Throughout Torah (Genesis, Exodus, Leviticus, Numbers, and Deuteronomy) we are introduced to God’s never-ending desire to dwell with His people.

The problem is, dark and light cannot co-exist. Where there is light, there cannot be darkness, so man with their sinful nature, could not dwell with God or enter into His presence.

So we are then introduced to faith. Yes, faith is what saved in the Old Testament!

The covenant God made with Abraham was a covenant based on faith. God promised Abraham children, land, blessings, and more in return for faith!

We see Abraham’s faith lived out in his obedience in taking Issac up to Mount Moriah.

What Does the Old Testament Say About Jesus? – The Prophets

The prophets were the mouthpieces of God. God spoke directly to the people through them.

But the prophets not only spoke FOR God, they spoke OF Him.

They not only spoke of Him, they described Him…in great detail. They had to or the people would be deceived.

They told the people where He would come from:

They spoke of His mother:

They spoke of His suffering:

They spoke of His death:

They spoke of Him coming again!

The Old Testament vs New Testament – The Result is Grace

When you read through what seems to you like seemingly endless laws, remember the result of those is grace.

When you sift through never-ending genealogies, the result of those is grace.

As you sit and tire of reading about bulls and lambs, the result of those is grace.

The result of all these things that you may find difficult or even tiresome in the Old Testament (let’s be honest, genealogies can go on a LONG time) set the scene for grace.

Why is the Old Testament important for you as a Christian?

Without those things, without learning about each and every detail of the sacrificial system, without understanding each detail of the priestly duties, we do not fully comprehend Scripture when it talks about Jesus as:

What Does the Old Testament Say About Jesus?

Now while this is a verse from the New Testament, it shows how Jesus was there at creation! He was not only WITH God, He is ONE WITH God. This is evident in Genesis:

He was the fourth man in the fire with Shedrach, Meshach and Abednego:

He appeared as an “angel of the Lord” whose Name is ‘Wonderful’ with the Hebrew translated ‘wonderful, incomprehensible, extraordinary’ according to Strong’s Concordance.

Why is the Old Testament Important? – All Scripture is Given by Inspiration of God

Paul is saying that the entirety of the Word, which again was the Old Testament in his day, is to help us be complete and equipped.

The Old Testament vs New Testament – But The Old is Intimidating

The Old Testament can be intimidating. It can be difficult to read. It can make us feel like we just don’t get it!

Now, I have read Ezekiel many times and I will honestly tell you that I am a HUGE fan of the Book of Revelation but Ezekiel intimidated me!! I could always feel my eyes go dim as I read about a wheel within a wheel.

Not every book of the Bible is going to be easy to read. So that is why, for those books you can rely on various tools for Bible study.

Yes, as I mentioned, the one thing about the Old Testament vs New Testament is it CAN be a little difficult to understand.

Using tools like a concordance can help you look at the original meaning of the words to help make them clearer. A commentary can help you by seeing what lessons someone has drawn from the book and can point you to similar texts so you can see how they work together.

Tools are an amazing way to get deeper into Scripture.

Here are some Bible study tools I recommend:

I hope this article encourages you to spend some time in the Old Testament and seek Jesus there. He is evident throughout! The enemy wants you to feel intimidated or that the Old Testament just ‘doesn’t apply’ because he wants to keep you from experiencing it.

We don’t have an Old Testament vs New Testament. They both come together as one Bible that teaches us about the one God we serve and about our Messiah Yeshua.

If you have chosen to study a book of the Old Testament, comment below and let me know what you plan to read and I might even do a Bible study on that book!

Make 2021 the year you dive into those intimidating books and see what God reveals to you!

Pin, Social and Featured images courtesy of Priscilla Du Preez in Unsplash so check out her other images!