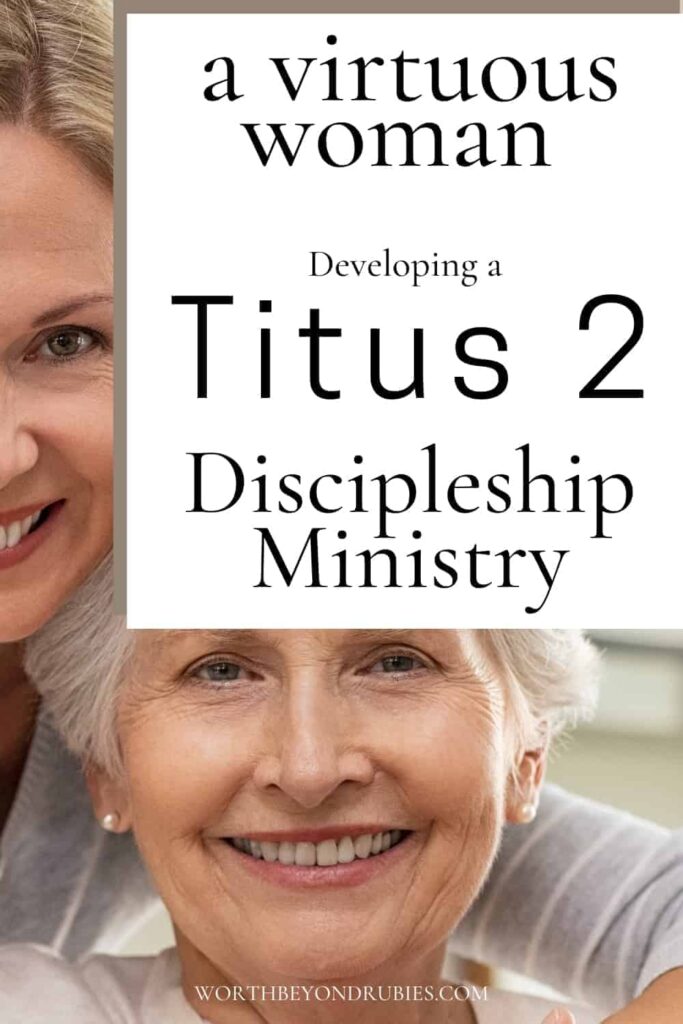 A virtuous woman, who can find? We are all too familiar with the Proverbs 31 woman! We strive to be wives, mothers, women like her!  It is that lofty goal I think all of us want to attain. But there is another woman we should seek to be like! A woman who can go on to mentor and help mold that Proverbs 31 woman. She is the Titus 2 woman! We will learn what it means to be a virtuous woman and how to develop a Titus 2 discipleship ministry!

A Virtuous Woman – A Letter to My Younger Self

What would you tell yourself if you could write a letter

and send it back in time? Think about all the advice and wisdom you now possess that you would share with your younger self.

I don’t believe in having regrets. Everything in life is a lesson.

There are many mistakes I could have avoided with the benefit of a mentor to guide me, that’s for sure.

Now to be clear, mistakes are ok! We learn from them and grow from them and hopefully pass those lesson on to others! In fact it’s those mistakes we make that DO make us good mentors!

What is a Virtuous Woman?

The word ‘virtuous‘ in this verse is the Hebrew word ‘chayil’and it means:

It means power and might! A virtuous woman is powerful!

Many people hear this verse and think of virtue as we know it in English. We think of pure and high moral standards, but that is not the word the original language references here with regards to a virtuous woman.

We so often think of how a Christian woman should conduct herself but this chapter of Proverbs wasn’t written about a Christian woman. They did not exist at that time! A virtuous woman was referring to a Jewish wife and mother.

I point this out for one reason; Judaism is a matriarchal society.

We hear so much about the Bible speaking of how a woman is to be meek and mild, how she is to be obedient to her husband and this is all true! But these behaviors and standards do not come from a place of weakness or of men wanting to control their wives.

In fact, the right of return to Israel or ‘aliyah’, the requirements state in the 2nd Amendment of the Law of Return in Section 1, 4B:

“For the purposes of this Law, “Jew” means a person who was born of a Jewish mother or has become converted to Judaism and who is not a member of another religion.”

So when we read in the Bible about how a woman should conduct herself, she is not being maligned or looked down upon. It is to establish authority, not importance.

Too often in our society we view being different as being “less”. We automatically assume if someone has authority over us it means we are lowly. But do you view your children as less than? Do you see them as having less value just because you have authority over them?

We too shouldn’t assume women are looked down upon just because they are under biblical authority as well.

A Virtuous Woman is the Heart of the Home

In the home, the man was definitely the head of the household, but the woman was the heart.

The virtuous woman runs her home like a well-oiled machine. She protects all who dwells in it and makes sure they are provided for. In addition, she controlled funds and real estate dealings and she did it on her own as Proverbs 31:16 says:

She made sure not only her family was cared for, but her servants as well. She was a business woman, a merchandiser, a vintner, a wife, a mother, and a support to her husband and his standing in the community.

It is no wonder with all she does that she is called ‘chayil’.

I Needed a Titus 2 Discipleship Ministry Myself

I got married at 19 and divorced at 21 with a baby! There was nothing wrong with my first husband or even with our marriage. We are still friendly even today! I just didn’t know how to be married! I didn’t know how to handle conflict.

The day after I got married we got in our VW Bug and drove from New York to Virginia where he was stationed in the military. I was alone for the first time in my life and had no one there to guide me or help me through what were, in hindsight, normal marital issues.

There I was, isolated and alone! My friends and my family were all back in New York and this was WAY before the days of the internet!

I have so much advice and wisdom gained through my trials that would have spared my younger self (and others) so much pain and heartache.

But through becoming a Titus 2 woman and having a Titus 2 discipleship ministry, I can help younger women learn from those gains.

Who is the Titus 2 Woman?

You see, we all want to aspire to be Proverbs 31 but we are not to stop there!

Some see that as the end game, the crowning achievement. But it’s not!

You see..we all want to aspire to be Proverbs 31 women but we are not to stop there.  Some see that as the end game, the crowning achievement.  But it’s not! Click To Tweet

She may not be as popular in teachings but she’s just as important as her Proverbs 31 counterpart. She is the Titus 2 woman.

We are to learn those lessons in life to be able to go on and achieve what Titus 2 calls us in verses 3-5:

Note it says to be submissive to their OWN husbands. Again, this is in the context of the family structure and not saying women are beneath men any more than our children are lesser human beings because they are under our authority.

Although we may not be able to send those letters back in time to ourselves, we can BE those letters, living epistles if you will, to other women and help them go on to be the wives and mothers they aspire to be!

We may not be able to send those letters back in time to ourselves but we can BE those letters, living epistles if you will, to other women and help them go on to be the wives and mothers they aspire to be! Click To Tweet

We have a Biblical responsibility to mentor younger women as we grow older. What an impactful ministry that is! God has called us to that Titus 2 ministry!

Titus 2 Discipleship Ministry – Reaching Out to Younger Women of Faith

Even worse, someone could experience a hardship that I could have possibly helped prevent.

But those failures, those mistakes, come with invaluable wisdom gained. Our mistakes are not in vain!!

They could be simple mistakes. And mistakes are OK! As I said, our mistakes are not in vain! We all learn from them and there is nothing wrong with young women making them. But we have a Biblical mandate to teach them the ways of the Word, even if they make mistakes around the house!

Mistakes like when I was first married, I thought it would be ok to use regular dishwashing soap in the dishwasher. After cleaning a ton of suds off my kitchen floor I quickly learned that it was not a good plan.

I have shared that nugget of wisdom with my daughters. They will never do that thanks to my experience (and hopefully the fact that they have more sense than I did!).

Then there are bigger, more painful mistakes to share. Those are not as easy or as hilarious as suds on the floor but they are more valuable.

If you are a young woman just starting off in life, then sure, strive to be that Proverbs 31 woman.

Will it always go as planned? No! It’s a challenge! Will you mess up? Plenty! And there is nothing wrong with that!!

It is through those messes that God refines us and makes us who we are so that we CAN share with others through that Titus 2 ministry! He gives us the grace to pull through them and learn from them!

You are a virtuous woman! You are strong and you are fierce, like our Proverbs 31 friend!

Every time you slip up, it will be a lesson that one day your daughter or your niece or a young woman in your church could learn from.

So don’t make becoming a Proverbs 31 woman the goal line for yourself. Make it a stepping stone to fulfilling that much needed, valued, Titus 2 ministry that so many young women need today.

And don’t forget to get your FREE ACTS Prayer Method Workbook below as my gift to you!

Don’t make becoming a Proverbs 31 woman the goal line for yourself, make it a stepping stone! Click To Tweet