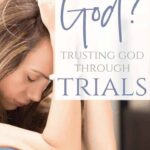 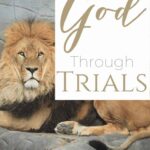 Trusting God through trials that we go through in our lives is not always easy, especially for a new believer. As we go through these trials we sometimes ask the question, “where is God when it hurts?” Is He there? Does He see what I am going through?

Sometimes we question God and ask ‘why do You let me go through these difficulties? Why is it I pray for You to take these problems of mine away and yet You don’t?’ You may experience anger, hurt, and even disappointment with God.

So how do you trust God through trials? There are some Biblical examples that show we may be looking for the wrong answer. We may be looking for God to just take all our difficulties away, but He never promised us that. When we ask “where is God?’ we have some great examples in Scripture that tell us how to look for Him in them! 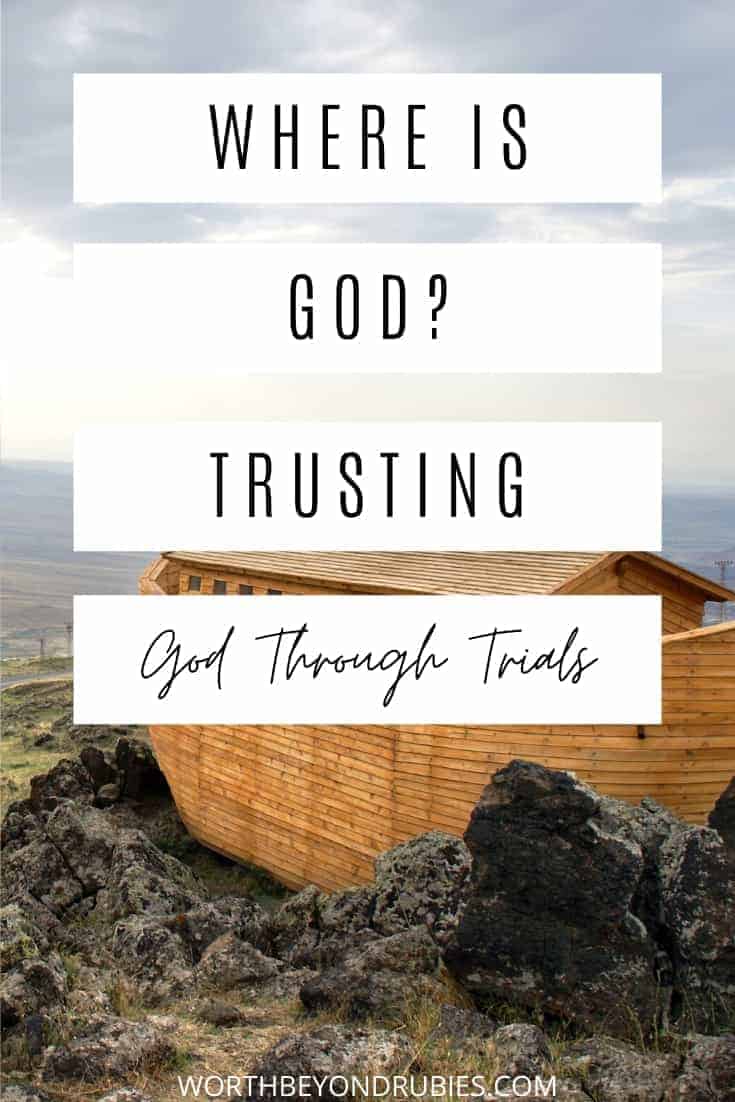 When asking ‘where is God?’ is in our difficulties, I am reminded of some people who went through some serious trials. And they are an example of how God can be WITH us in a trial without removing us from it.

God can be WITH us in a trial without removing us from it!

Daniel in the Lion’s Den

He was tossed into the lion’s den because good old King Darius’ governors and satraps (essentially a local ruler) were basically jealous of him. He was one of the Governors of the King and the Bible tells us in Daniel, Chapter 6, that he “distinguished himself” over the others.

We know, therefore, that he had some favor with the King. So these men had a plot formed against Daniel. They just wanted to get rid of him.

So what they did was they made a law that prevented anyone from petitioning any man or god, other than the King, for thirty days, knowing full well that Daniel would not stop praying to his God. They knew Daniel would not obey this law. So, they push this law in front of the King and get him to sign it, without him having an understanding of what they really wanted it for.

A Trap for Daniel

So the men wait and they catch Daniel praying that evening at his window and he’s praying to God, as they well expected. They run and make a petition to the King to throw Daniel into the lion’s den for going against the law.

You can just see that the King wanted to let Daniel off the hook here but the men reminded the King that once he signs a law he cannot revoke it. So, the King’s hands were tied and he had no choice but to honor the law he signed and punish Daniel.

Darius is upset about all this but as King, he has to go by the very law he signed and he even tells Daniel, “Your God will deliver you.” And Daniel knew this to be true.

Daniel is then tossed into this den of lions. The next morning Daniel was found to be alive and you just know King Darius is thrilled…the Governors and Satraps not so much…and Daniel says in Daniel 6:22:

My God hath sent his angel, and hath shut the lions’ mouths, that they have not hurt me: forasmuch as before him innocency was found in me….KJV

You see Daniel may have broken the law of King Darius but he was obedient to God. And because of this, God provided him protection.

You see Daniel may have broken the law of King Darius but he was obedient to God.  And God provided him protection.

Where is God in the Fiery Furnace?

The next example is also in the Book of Daniel and it is the story of three men, three friends of Daniel in fact, named Shedrach, Meshach, and Abed-Nego.

If it be so, our God whom we serve is able to deliver us from the burning fiery furnace Daniel 3:17 KJV

Into the Fiery Furnace

Now, the King was SO angry with them that not only were they to be tossed into this furnace but the King ordered that the furnace be heated SEVEN times hotter than usual! The King was not playing around! He didn’t want to just punish them, he now wanted to annihilate them!

So, he orders that they turn this thing up seven times hotter and this thing was so hot that the men who threw the three into the furnace were killed by the flames!

Where is God? – The Fourth Man in the Furnace

They throw the trio into the furnace and, a while later, the King and his men go and check to see that these three have been burned up and the King looks and says,

Did not we cast three men bound into the midst of the fire? They answered and said unto the king, True, O king. Daniel 3:34 KJV

Now keep in mind, these men were not just thrown into the furnace, they were bound and had all their clothing on. And the men with him, the Governors and Administrators, tell him he’s correct. Then the King, probably quite shocked, says,

He answered and said, Lo, I see four men loose, walking in the midst of the fire, and they have no hurt; and the form of the fourth is like the SON OF GOD -Daniel 3:25 (KJV- Emphasis mine)

The King sees FOUR men and not only are they all IN the furnace..a furnace so hot that it killed the men who put them in it, but there are four men walking around!

It was as though they had never even gone through the fire.

Trusting God through trials means believing He is with you in the fire!

The Bible says they didn’t even smell like smoke!

Where is God? – He is Always With Us

Where is God? The Bible says He was right there with them! Daniel said an “angel of the Lord” was there with him and shut the mouths of the lions. King Nebuchadnezzar saw one like the “Son of God” in the midst of the furnace.

The one thing these people all had in common was a FAITH that God would deliver them.

Trusting God Through Trials – Noah and the Flood

I am reminded of another person who had that kind of faith. It was a man named Noah.

God told Noah He wanted him to build an ark. He told him He was going to cause a flood to come across the entire planet and destroy every living thing except for Noah and his family and the creatures of the earth Noah brought into the ark.

I can just see Noah out there without a sign of rain, not a cloud in the sky building this huge ark! And I can just imagine all the people…all these people around him laughing and mocking him. I am sure they all thought he was crazy!! I am sure Noah had a time or two he wondered that himself!

But he kept on building it.

And he built it to the exact specifications God give him. Then the rain comes.

And they still had to live around these animals who I am sure stunk! Imagine having to live on a boat with all these stinky animals!! And it probably wasn’t a pleasant situation!!

God did not take Noah OUT of the flood!

And a lot of times our problems and our situations stink too!!

Overcoming the Storms of Life

Noah had the flood and many times we have to leave our comfort zone, we have to lose people we love, we have to get in situations that make us wish we could go back (like the Hebrews wanting to return to their bondage in Egypt at times) and we have to get around a bunch of stinky, smelly stuff.

Where is God in the flood?

He was there in the ark. God took Noah THROUGH the flood, not out of it. He got him through it, He didn’t remove him from it.

Trusting God through trials means trusting Him and His plan!

When it comes to people overcoming their trials, the storms in life, they all had one thing in common. Each had a faith in God and an obedience to God’s Word. They did what they knew God wanted them to do. Each didn’t question, they just DID. They didn’t bow down to idols to get out of a bad situation, they dug in their heels and obeyed even when they didn’t yet see the outcome.

So while God may not always remove us from the trials, while He may not remove the problem from us, if we have faith and stand fast in His Word He WILL get us through it.

You see God will do no less for you than He did for them.

Where is God? – He is Our Ark in the Flood

Trusting God through trials often means we need to stop always looking for God to take our problems away! Oh He will at times! But at times He needs us to go through stuff, and we need to pray for the faith, the grace and the mercy and the strength to get through it.

We need to pray for God to show us the lesson He has for us in the trials of life. Pray for that increase in faith so we can learn to lean more on Him.

Pray for God to give us our ark in the flood, our fourth man in the furnace, our angel to shut the mouth of the lions that want to devour us!

And if you do, you will come out of them not even smelling like smoke!

Not only will He get you through any problem..you will come out not even smelling like smoke!

1.) FOLLOW YOUR HOST VIA THEIR BLOG AND/OR SOCIAL MEDIA CHANNELS (Not Mandatory but very much appreciated!)

2.) LEAVE 1-2 OF YOUR MOST RECENT CHRISTIAN LIVING POSTS ONLY. ANY DIY, CRAFTS, RECIPES, ETC.  WILL BE DELETED. WE ALSO RESERVE THE RIGHT TO DELETE POSTS THAT DON’T ALIGN WITH THE THEME

3.) VISIT 1-2 OTHER LINKS AND LEAVE A MEANINGFUL COMMENT!  PLEASE DON’T LINK AND RUN!

4.) ALL LINKS ARE RANDOMLY SORTED – FEEL FREE TO LINK AS EARLY OR AS LATE AS YOU’D LIKE. THE PLAYING FIELD IS EVEN!

Please grab our button and place on your site so others can join us! 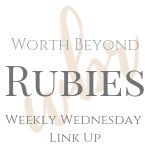 22 thoughts on “Trusting God Through Trials – Where is God?”